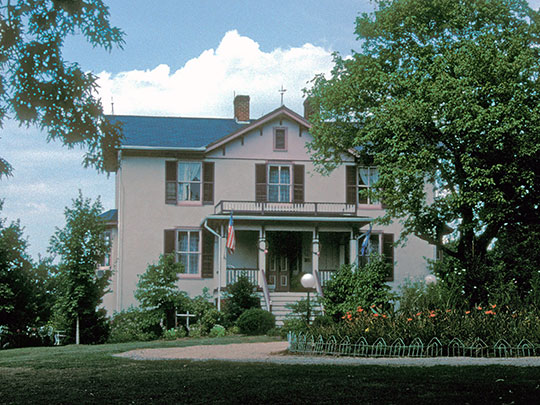 The origins of Scottsville date back to 1732 when Edward Scott, Coochland County Magistrate, Sheriff and Burgess, patented 550 acres in the upper northwest corner of Horseshoe Bend, on a hill just west of the future town. The government of the newly-formed Albemarle County was organized there in 1741. It was chosen because it was roughly in the geographical center of a large political division which, eventually would be divided into 5 separate counties.

Scottsville is situated on the north bank of the James River, at the renowned Horseshoe Bend, in Albemarle County, with a small section in Fluvanna County. The village is roughly L-shaped in plan, with the two major streets — Main Street paralleling the river and Valley Street running north up a ravine toward Charlottesville — meeting at an oblique angle in the center of town. It is at the apex of the angle and extending along Valley and Main Streets from it that the principal commercial buildings are located.

By virtue of its position on the James River and of its originally having been the seat of Albemarle County, Scottsville has always been an important point on one of the main routes of east-west traffic in Virginia. The James River and Kanawha Canal once passed through the village along the riverbank. The canal and its turning basin are now filled, the Chesapeake and Ohio Railroad having supplanted it, with its tracks occupying the old towpath.