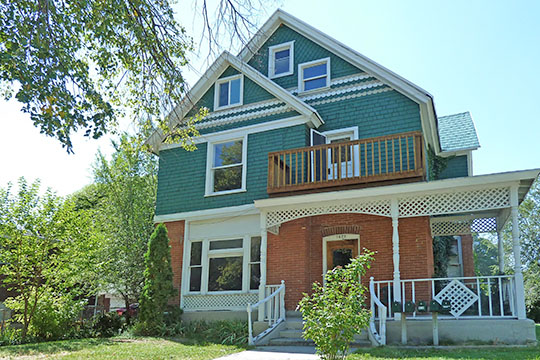 The Perkins Addition Streetcar Suburb was listed on the National Register of Historic Places in 1983. Portions of the content of this web page were adapted from a copy of the original nomination document. [‡] Adaptation copyright © 2015, The Gombach Group

The Perkins Addition Streetcar Suburb of Salt Lake City includes ten large, brick houses built in 1891 as part of Perkins Addition subdivision. The houses are all easily identified and visually linked with each other because of the similarity of their designs, and the similarity of the building materials, high-quality pressed brick and distinct decorative and structural frame elements. The exterior walls of three of the houses have been painted, concealing the red brick used to build each house and various minor alterations have been made on almost all of the houses, although none that significantly compromise their integrity. The large brick carriage house behind the John W. Judd House at 918 E. Logan Avenue is the only significant auxiliary building associated with the Perkins houses.

The Perkins Addition Streetcar Subdivision is architecturally and historically the most visually cohesive example of a streetcar subdivision in Salt Lake City. [See: Streetcar Suburbs, 1888 to 1928]

The ten houses in Perkins Addition are located within a one block radius, lining both sides of 1700 South and Logan Avenue. Although they are visually prominent in the neighborhood, they are physically separated and visually isolated from each other by later infill construction in the subdivision. Only two of the Perkins houses are located on adjacent lots, the Charles H. Weeks House, 935 East Logan Avenue, and the Harper J, Dininny House, 925 East Logan Avenue. The majority of the newer houses are bungalows that were built between about 1905 and 1915, however, there are several single family houses and duplexes in the neighborhood, built as late as the 1960s. There are no landscape features which help unite or identify the original Perkins houses. The concrete sidewalks that were to have been laid in front of the houses at the time they were built have been replaced by more recent sidewalks, and the original rows of Box Elder trees which were planted along the streets have either been replaced by younger trees or removed altogether.

The ten houses included in the Perkins Addition are:

The houses in Perkins Addition represent a unique collection of dwellings which, having been built in the same year by a single development organization, best display in Salt Lake City the ideal sought in popular building during the early period of subdivision development. Ideally each suburban house was to be a unique creation which expressed the personality and taste of the family occupying it. Because the cost of hiring an architect was prohibitive for most prospective homeowners, books filled with house plans became available from which the perfect house could be chosen and plans and specifications purchased at a reasonable cost. That procedure alone tended to standardize the house types built, and, in addition, certain plans were more popular and therefore often repeated. More often than not, however, the family had little to say in the specific design of their home. The majority of moderate cost suburban homes were built on speculation, not for a particular family. Perkins Addition is clearly a group of houses based on common design principles and elements. It differs from other subdivisions, however, in that instead of consisting of houses that were exact replicas or mirror images of one another, with minor changes in details, it is made up of ten unique houses.

It may be true as stated in the Salt Lake Tribune advertisements that prospective Perkins owners were able to select the house of their choice from 200 different designs, but, it seems unlikely that the variety that is found in the houses which did get constructed can be completely attributed to the individual preferences of the new homeowners. Five of the ten houses were speculative adventures, and seven of the ten houses are clearly variations of a single design, indicating that the Metropolitan Investment Corporation was simply marketing and building what it thought would be a popular type of house, one that would satisfy the current ideal for individuality, but which would also meet homeowner needs, announce their financial and social aspirations, and be singular and personal expressions of their taste and preference. Basically the end result was the same, suburban homeowners had individualized houses, but because the process by which they were obtained was more realistic than idealistic, determined primarily by the investors, not homeowners, obvious similarities exist between house types and decorative elements.

Seven of the ten houses are variations of a single design, a two or two and one half story rectangular house distinguished by a four-opening, gable facade and distinctive two story entrance porches. Each of those houses, however, is uniquely different. The Mabry-Van Pelt House has the elegant facade of the other houses, but it is the smallest of the group. The Byron Cummings House, one of the largest of the seven houses, running deeply into the lot and two and one half stories in height, has the simplest massing, lacking the crosswings and projecting bays that were common to the other six houses, but having the most elaborate, individualized facade. The Elgin S. Yankee House, by contrast, has been simplified to its basic elements, a two story brick house with a four bay facade, windows and doors cut clearly into the wall surface with a minimal amount of decorative features. The Thomas Yardley House, too, falls into the same category, being a more modest version of the common type. The John W. Judd House, like the Cummings House, was designed as a kind of show place within the subdivision. Instead of having an elaborate facade, however, its grandeur is stated in its massing, two and one half stories with several crosswings, projecting bays, and an interplay of gable forms of differing sizes. Unlike any other house in the addition, both the east and west sides were designed to be seen from the road, and therefore, each was distinctively composed. The Henry Luce House and the Clifford R. Pearsall House are distinctive because each has a secondary gable projection which gives the facade an added dimension. The Luce House is the only one of the seven which has symmetrical crosswings. The single story entrance porch and distinctive second story porch set into a projecting bay on the facade mark the Pearsall facade composition as the most divergent from the standard plan.

Those features common to all seven of the houses, in addition to the four-opening, gable facade, and distinctive front porch are: the combination of brick for the main block and frame in the gable section (except in the Cummings House); the use of belt courses and changes in material to interrupt the vertical thrust of the mass of the house; an open porch either spanning the facade or extending off the front porch around the front corner and down the side of the building; and a common vocabulary of decorative features. Decorative features include: bargeboards with geometric surface patterns; combinations of fishscale, diamond, and regular shingles, recessed panels and other geometric elements in the gable and porch pediments; three part windows of varying types, often including stained glass panels; porches adorned with spindle bands, lathe turned porch piers, and balustrades of geometric patterns or straight posts; and sandstone lintels and sills.

Three of the ten Perkins Addition houses stand apart from the seven previously discussed, the Harper J. Dininny House, 927 E. Logan Avenue, the Charles H. Weeks House, 935 E. Logan Avenue, and the Alexander Mitchell House, 1620 South 1000 East. They additionally support the possibility that variety and distinction in early subdivision design were sought by investors as well as by prospective homeowners. Both the Weeks House and the Dininny house clearly seem to have been speculative ventures, as compared with the Mitchell House in which the original owner lived for eight years. It is likely that the original owner or investor in each case was presented with a variety of designs from which to choose. It is significant to note, however, that although the types chosen vary from the seven other houses in the subdivision in scale, design, and massing, there are key characteristics which link those three houses to the rest of the subdivision. Characteristics such as the gable facade, and the combination of crosswings and projecting bays in house massing have been maintained, but modified in each house. The gable remains the key focal point in each house, but in the Dininny House it has been reduced, projecting in front of a jerkinhead roof section, the only one in the subdivision. In the Weeks House the gable dominates the facade, but the whole house has been scaled down to one and one half stories. In the Mitchell House the gable has exploded into a complex mass of intersecting gable forms. The combination of materials, brick and frame, in addition to the use of belt courses emphatically serve to negate the vertical thrust of each of these houses, just as was the case in the seven others. In the Weeks and Mitchell Houses, however, shingle siding not only provides a horizontal division, but it is the primary building material for the upper stories of each house. Key decorative elements such as bargeboards with geometric patterns, variety in shingle composition, and three part windows clearly tie these buildings to the other buildings in the subdivision, and to a common source, designs that originated in Colorado.