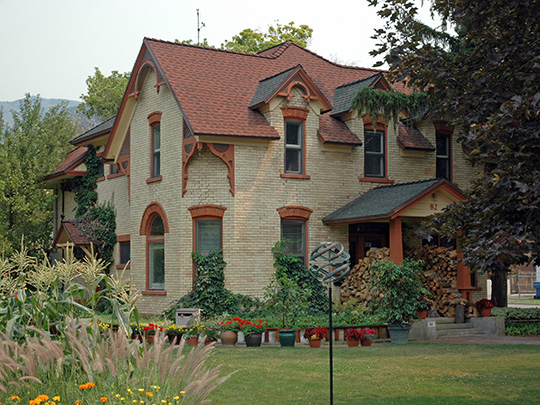 First settled by Mormons in 1859, Logan was incorporated in 1866. It lies along the Logan River on the western slope of the Bear River Mountain Range.

The influx of new settlers into the Cache Valley brought on a settlement bonanza in 1859. In just a few months, Providence, Logan, Hyde Park, Smithfield, Richmond, and Mendon were established, creating a chain of closely linked villages instead of one overgrown town. The next year brought three more communities into existence in the valley of the north, making a total of ten village settlements in just two years. All of these communities used the fort style settlement thus rejecting the homestead method of western pioneering so common in all other western territories. This unique form of western settlement also helped the town life so deeply ingrained in the Utah way of life.

Logan's birth came in June when two groups of settlers built their homes in the fort style along present day Center Street for about two blocks. The next year another block was added to the nascent, but burgeoning community. Most of the houses in this vernal village were built of logs with dirt floors and dirt roofs. Despite this terrestrial beginning, Logan became the most prominent town in the valley because of two reasons. First, it was about equal distance from the outlying communities which automatically gave it the cardinal position in the valley. Second, because it was settled on the banks of the Logan River, it gave the community the greatest source of water supply of any place in the valley. The chart below shows Logan's tremendous growth compared to the other communities of the valley.

Though settled in 1859, Logan and all other communities in Cache Valley were not incorporated for several years after settlement so the Mormon Church's ecclesiastical leaders fulfilled this political void while maintaining the religious leadership of the communities at the same time. William B. Preston was chosen to be the Bishop of Logan in 1859 by Mormon Church Apostles, Orson Hyde and Ezra T. Benson.

By 1864 the city had now been surveyed and laid out and the properties deeded, though in fact, they were just squatters on public domain since the land still remained officially in the hands of the federal government. But what was the plan of the city? The settlement of the city and its plans for future growth had been worked out long before the pioneers had ever come to Cache Valley. The founder of the Mormon Church, Joseph Smith, had determined the city plans for the "ideal" Mormon community in 1833.

"This ideal city was to be one mile square, with ten-acre blocks, divided into one-half-acre lots, one house to the lot; a complex of temples was located on two city blocks. The ideal, according to Joseph Smith, was to fill this city then another one next to it, and so on as needed to fill up the world in these last days."

The plan was modified a little in regards to the number of temples in the area, but the rest of Joseph Smith's ideal was applied to Logan with great care, thus formalizing the village concept. Each family received a town lot of about an acre and a quarter upon which they were to plant their vegetables and small orchard as well as their home. In addition to the city lot, each family was given approximately two farm tracts to plant their crops. The tracts were situated on the perimeter of the city lots just a short distance from their homes. This required a daily ride to their farms, but it also continued the close relationship of the fort style life that, the settlers had previously known. This village lifestyle allowed for the close contact of the individuals with one another, thus allowing the development of culture through schools, neighborhoods, entertainment, commerce, and, of course, churches. Out of this lifestyle, unique forms emerged which contradicted some of the traditional frontier methods. For example, no one could own the water, though anyone could receive a share providing he did his part in the construction or maintenance of the canals. A similar condition existed with timber and to some extent land. New arrivals to these early communities received land allocations without charge.

The plan of Zion set aside ground for particular buildings, namely a meeting place and a temple, and in 1865, excavation for the construction of a tabernacle began. However, for several reasons, the construction of the religious and public edifice was delayed and the tabernacle was not finished until 1891. This impressive structure has been used for all the conferences of the Mormon Church as well as many public meetings and performances. The structure is still standing and is an integral part of the district. Once again, most of the material for the impressive building is local, including the rock of which it is built. The crowning stage of the implementation of the City of Zion Plan was the construction of a temple. Logan began the construction of this magnificent stone structure in 1877. The raw materials for the construction of the temple again came from the local canyons, and the work and the demand for the project created a virtual boom town atmosphere in the valley. The project took seven years of intensive labor and sacrifice from the valley citizens. Today, this beautiful edifice is still the symbolic structure of the valley.

Logan's central location and its excellent water supply soon made it not only the religious center of the valley, but the economic and financial center as well. By the mid-eighties, the two major streets of the town, Center and Main, became the commercial center of the entire valley. These streets are still the center of the valley's commercial district with some of the buildings dating back to the 1860's. Most, however, are late nineteenth and early twentieth century. By the 1890s, Logan had progressed beyond the pioneer stage and was now entering into the mainstream of American life. The town began to show the physical effects of the desire to be accepted by the rest of the American society.