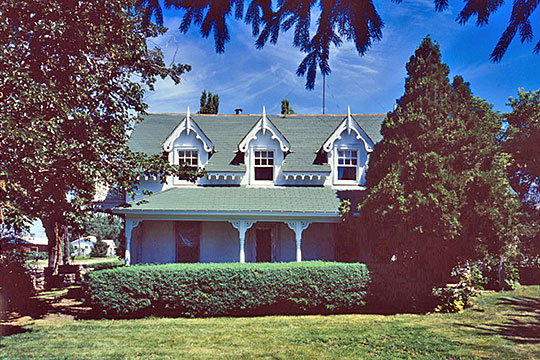 Willard, in Box Elder County, Utah, was one of the early settlements founded by Mormon settlers upon a request from Brigham Young. It was originally known as "Willow Creek" in recognition of the steady stream flowing from a steep mountain canyon to the great Salt Lake. Later the town was renamed to honor Willard Richards, an apostle in the Church of Jesus Christ of Latter-Day Saints. In plan the town resembles the plat of the "City of Zion" as designed by Mormon leaders before the settlement of the Utah territory. Instead of dispersed farmsteads, as encouraged by federal land acts of the nineteenth century, the Mormons maintained a closely knit village pattern. Important distinguishing characteristics of a Mormon village manifested in Willard are the presence of barns, granaries, corrals and fences in the village proper. The townsite rests on a wide alluvial fan whose fertile soil has supported farms and orchards since the days of the first pioneers in 1851.

An abundance of finely crafted pioneer stone architecture sets Willard apart from most other Mormon villages. This fact was recognized in July of 1974 when a large portion of the town was designated a National Historic District. The ingenuity of the settlers in making such harmonious use of natural stone, quarried from the mountain canyon just east of the townsite, is uniquely demonstrated in a majority of the more than forty historic structures found within the boundaries of the historic district.

John L. Edwards, a prominent cattleman in northern Utah, immigrated from Wales in 1855 and shortly thereafter settled in Willard. Active in both civic and church affairs, he served as acting Bishop of the Willard Ward of the Church of Jesus Christ of Latter-Day Saints and two terms as the town's mayor.