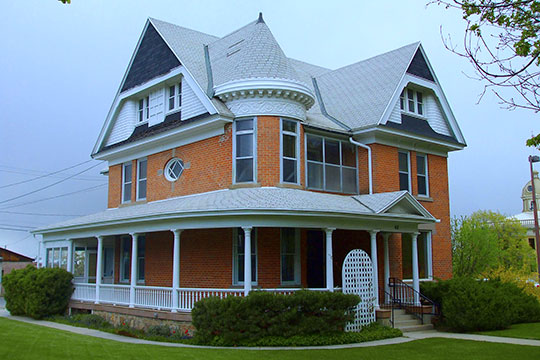 From Brigham City's founding year of 1853 until the 1950s, agriculture was the mainstay of its economy. For more than a century, the town's hard-working middle-class people made a living primarily as farmers and, on a more limited basis, as merchants and factory workers. The homes most people could afford to build were moderate family dwellings in the current Utah vernacular or national styles. Thus, the residential landscape of Brigham City today consists of many simple homes and just a few large and elaborate ones. Ninety-six percent of all buildings in town are 1 or 1-1/2 stories.

Brigham City and Box Elder County followed colonization patterns of the Utah Territory by the Mormon settlers. Before the city was platted, outlying land was surveyed in 1851 and parceled into farms of 40 to 80 acres. This was done in order to construct extensive irrigation systems to water crops and to allow enough land to be available for the influx of new people. The city was divided into half-acre lots in 1856 by surveyor Jesse Fox. It was platted into a rectangular, grid pattern with ample land for each family to have its own home, orchard and garden. Many people kept their domestic animals behind their homes in small corrals. Public squares provided room for churches and other community buildings. Box Elder Creek supplied the town's water, including water to run the early factories. Irrigation ditches and open wells provided water at each residence.

The earliest homes built in Brigham City were small adobe structures and a few log cabins. The only surviving log cabin belongs to the Daughters of the Utah Pioneers organization. It was moved in 1929 from its original location (100 South and 100 East streets) to the city's Pioneer Park (600 West to 800 West adjacent to Forest Street). On May 26, 2000, it was moved from Pioneer Park to Brigham Young Park (200 West to 300 West adjacent to Forest Street). This 14x18 foot, single-cell cabin was built for William O. Knudson by Porter Squires in 1855.

Brigham City's economic progression generally followed statewide trends with just a few variations. The development of Utah's economy began with agriculture, was supplemented with mining in the 1870s, and finally was supported with a manufacturing sector around 1900. Brigham City's economy began with and always retained a dominant agricultural part until after World War II. Mining was never important, but manufacturing did come into the picture as early as 1870.