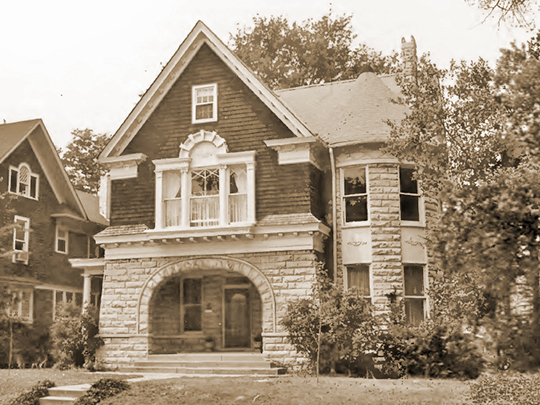 The Annesdale Park Historic District was listed on the National Register of Historic Places in 1978. Portions of the content of this web page were adapted from a copy of the original nomination document. [‡]

Annesdale Park, known from its beginning development as "The First Subdivision of the South," is an important and almost undisturbed collection of early 20th century architecture, reflecting the transitional period between ornate Victorian style houses and bungalows. In addition, some of the original tiled street signs, carriage blocks, and almost all of the original street lighting is still in place. The first residents of Annesdale Park were members of an emerging upper-middle economic class, benefiting from the prominence of Memphis in the cotton and lumber markets, and expanding wholesale and retail trade distribution. As Memphians moved to newer areas of the city, the maintenance of Annesdale Park declined; however, the last few years have seen an influx of new residents who are restoring their houses.

The significance of Annesdale Park lies in three areas. First, the subdivision developed in 1903 incorporated many of the physical improvements which have become expected standards for modern subdivisions. Its wide streets were paved and curbed, street lights were in place, utilities were installed, and street trees were planted. Its development became the model for several adjacent areas which developed over the following few years. In addition, developers specified the minimum dollar value of improvements to be placed on the property. These features, together with its access to public transportation on the newly built trolley line extension, reflected in adherence to planning standards which are still considered important in newly developing neighborhoods. [see: Streetcar Suburbs, 1888 to 1928]

Annesdale Park also reflects the growth of a rapidly expanding upper middle class in Memphis, emerging from the economic growth of the 1880s and 1900s and the healthy cotton and timber industries. A number of notable citizens who had an influence on the development of Memphis and the State lived in Annesdale Park. Among them were T. O. Vinton, a local land developer, Malcolm Patterson, governor of Tennessee from 1907-1911, Isaac Samuelson, owner of a very successful cigar company, Tennessee Supreme Court Justice Arthur S. Buckanan, Abe Cohn, a distinguished criminal attorney, Dr. Henry Posert and his brother-in-law Jacob Peres, the first rabbi of Memphis' Temple Israel and founder of the nation's first wholesale grocery company, and W. I. Cole, the founder of one of the largest millwork companies in the Mid-South and an unsuccessful candidate for Mayor of Memphis. In addition, the evolution of the area in the Depression and war years, and its later rejuvenation represent the changes occurring in many older city neighborhoods.

Annesdale Park's architecture represents the evolution from late Victorian to bungalow, which occurred during the first years of the twentieth century. Many of its older homes have building details from earlier style periods in the form of window treatment, shingling and interior details. Stained and leaded glass windows and transoms, oak woodwork, and bay and oriel windows are found in many houses. Several good examples of the Bungaloid style, as well as early twentieth, century apartment buildings, are also found in the neighborhood.