Photo: Broyles-Darwin House, ca. 1861, 108 Idaho Avenue, Dayton, TN. This is the oldest house within the city limits of Dayton. Listed on the National Register of Historic Places in 1996. Photographed by User:Congioloso (own work), 2012, [cc-by-3.0 (creativecommons.org/licenses/by/3.0)], via Wikimedia Commons, accessed October, 2013. 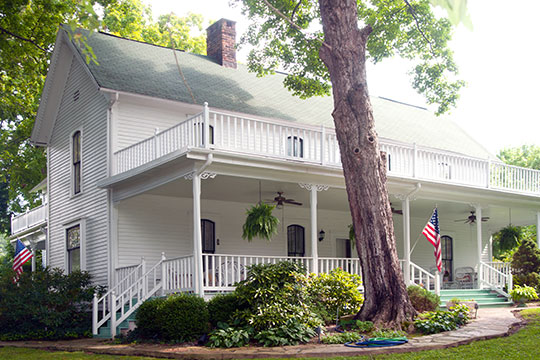 Dayton, seat of Rhea County, was founded in 1820 by W. H. Smith, a New England schoolmaster. The industrial plants include hosiery mills, an underwear factory, canneries, and a bottle works. Coal mines are operated in the nearby mountains. The Rhea County Courthouse was the location for the summer of 1925 Scopes Trial (John Thomas Scopes), also known as the "evolution trial" and/or the "Monkey Trial."

The trial launched Dayton onto the national stage ... it was soon aroar with newspapermen, itinerant preachers, and thousands of the curious. Revivalists put up tents and placarded the town with signs carrying pertinent Biblical warnings. The roads swarmed with buggies, mule-drawn wagons, and mud-spattered and dust-caked Fords, as Tennessee farmers and their families came to town to watch the defense of "Genesis." They publicly and frequently affirmed their belief in the Bible from "kiver to kiver" and some said that "this Darrow feller must have horns and a tail." All of them were eager to hear William Jennings Bryan, the Great Commoner, long famous on Chautauqua circuits for his "Crown of Thorns ... Cross of Gold" oration which, when first delivered in 1896, resulted in his nomination for the Presidency.

Tradesmen did a land-office business. Hot dog and lemonade stands were set up on every vacant lot. The crowd filled the small court room, aisles and windows, and overflowed into the court yard. During the hot summer days the trial proceeded with smooth oratory from Malone, shrewd cross-questioning from Clarence Darrow, and violent but eloquent outbursts from Bryan.

By the time the trial ended there was a personal feud between Bryan and Darrow. Under the trees of the courtyard, to which the court had moved, Bryan cried, "I want the world to know that this man who doesn't believe in God is using a Tennessee court to cast slurs on Him ..."

Darrow's reply, "I am simply examining you on the fool ideas that no intelligent Christian in the whole world believes," brought horrified gasps from part of the audience.

Scopes was found guilty and fined $100. Bryan died here on July 26, 1925, five days after the close of the trial into which he had entered all his nervous energy. As a memorial to him a William Jennings Bryan University was founded here.