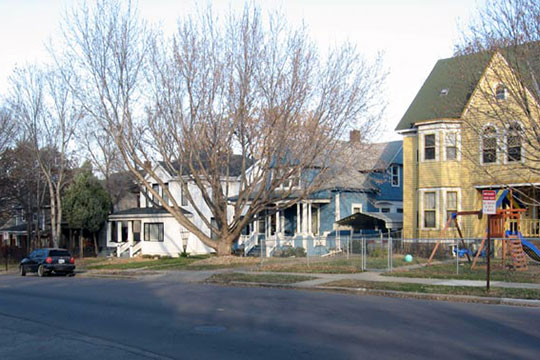 The All Saints Historic District was listed on the National Register of Historic Places in 1984. Portions of the content of this web page were adapted from a copy of the original nomination document. [‡]

Located to the south of the Sioux Falls central business district, the All Saints Historic District is comprised of the All Saints School, built in 1884, Longfellow School, constructed in 1916, Lyon Park, donated in 1928, and 240 residences which are situated in an area bounded by Main Avenue to Fifth Avenue and 14th Street to 23rd Street in the City of Sioux Falls. The vast majority of residences were built from 1900 to 1920.

The building of the 1879 branch of the Chicago, St. Paul, Minneapolis and Omaha Railroad and the construction of the All Saints School main building in 1884 led to the initial residential development in the District. Both modest and ornate homes were built in this neighborhood prior to the turn of the century. Twenty properties dating from 1880 to 1889 remain in the District.

The building of the 1879 branch of the Chicago, St. Paul, Minneapolis and Omaha Railroad and the construction of the All Saints School main building in 1884 led to the initial residential development in the District. Both modest and ornate homes were built in this neighborhood prior to the turn of the century. Twenty properties dating from 1880 to 1889 remain in the District. Ten of these buildings are simple worker's cottages—rectangular pens and cube houses—and tax records show that Artemus Gale and other speculators owned some of these properties into the twentieth century. The other ten houses are of more elaborate styles and include the flamboyant Queen Anne style Edward Coughran House, as well as two fine residences designed by architect Wallace Dow. This pattern of elaborate dwellings being constructed next to simple cottages is a dichotomy that has continued throughout the development of the District.

The All Saints Historic District experienced its greatest period of growth from 1900 to 1919 when houses were built. The houses dating from this era are fairly modest in size and style. There are numerous fine examples of bungalows, cube houses, and one-and-a-half story gabled cottages that were home to Sioux Falls' aspiring middle class. Many of these houses still retain the attractive architectural detailing characteristic to homes of that period: clapboard finishes, textured shingles at gable ends, dormer windows, leaded glass, gables within gables, brackets and exposed rafters at the rooflines, as well as pleasing interior woodwork. Many of these buildings also feature foundations of quartzite—a locally quarried granite that is pink in hue. Speculators played a role in the growth of the District during these decades. In 1903, an M. Russell (possibly Marcus Russell, cashier at the Sioux Falls Savings Bank) owned a number of one-and-a-half story gabled cottages. Although based on the same general plan, these cottages feature different dormer and porch treatments. Russell rented these properties to tenants until around 1908, when most of these houses were sold. While the majority of homes from this period are fairly modest, there are also some outstanding Neo-Colonial, Tudor Revival, Dutch Colonial, Prairie School, and Mediterranean-influenced houses represented in the neighborhood.

In 1870, Artemus Gale, a Sioux Falls pioneer and land speculator, staked a claim of 400 acres, including the land on which the All Saints District is located. Two events precipitated the nineteenth century development of this area—the building of the railroad and the establishment of the All Saints School. In 1878, the first railroad came to Sioux Falls; the Chicago, St. Paul, Minneapolis and Omaha Railway was laid from Valley Springs to Sioux Falls, and a year later the route was extended to Salem, South Dakota. This 1879 section traverses the District. In 1884, the All Saints School was established. Founded under the guidance of the Right Reverend William Hobart Hare, the first Episcopal Bishop of the Dakota Territory, All Saints was a girls' boarding school. Bishop Hare proposed the establishment of this school for daughters of missionaries and Sioux Falls residents in April of 1884. Within a few days, local citizens had chosen and secured the site and raised the necessary money. Construction began in the summer of 1884, and by September of 1885, the school was completed and opened for classes. This prominent landmark made the surrounding neighborhood an attractive residential area for the city. All Saints School continues to serve the community as a private co-educational day school for pre-school through grade 6, and thus for close to a century has been an important educational institution for the city.

With railroad linkage to the east and west and the establishment of such fine facilities as the school, Sioux Falls truly began to develop. From an 1873 population of 593, Sioux Falls grew to 2,164 in 1880, and to 10,177 in 1890, and residential development began to occur in the District. The All Saints neighborhood experienced its greatest growth, however, after the turn of the century. Between 1900 and 1919 when the population of Sioux Falls grew by almost 250 percent, 68 percent of the existing buildings were constructed. While the majority of the residences from this period are more modest in style, nonetheless, some architecturally distinctive residences were built by wealthier residents. For the most part, however, homes in the District are fairly modest in size and plan. Bungalows, cube houses, and one-and-a-half story gabled cottages predominate, and are characterized by leaded windows, decorative shingling and brackets, and attractive interior woodwork. These simple residences are significant as fine examples of middle class homes of the early twentieth century. They display the fine craftsmanship and attention to architectural detail that was characteristic of this period.