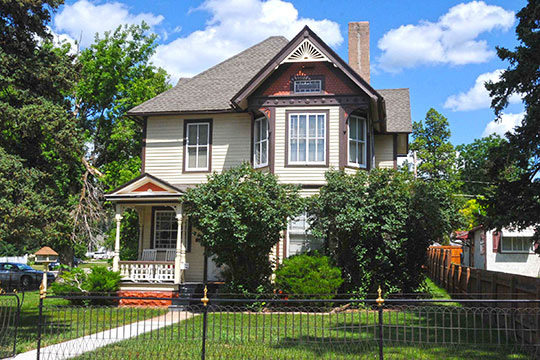 The history of Spearfish, South Dakota is filled with tales of Native Americans, gold fever and explorations of unknown territory. A new way of living was founded when the tiny settlement of Spearfish was established. People learned to enjoy the quiet atmosphere and the clean reputation of a new and prosperous city. Spearfish started small, but it would soon become the center of commerce and community in the northern Black Hills.

Spearfish's history does not begin with its establishment in 1876, but with the thrilling story of seven men who entered the Black Hills to find more than their share of excitement. In 1833, a band of men, led by Ezra Kind entered what was to become Lawrence County in search of gold. It seemed the band had discovered gold and were headed home when they were attacked and killed by Indians. One of the men made it through the first attack and quickly etched their story on a piece of rock, which was later called the Thoen Stone. The stone told of their discovery of gold and the attack by Indians. Ezra Kind was the only one to have survived the attack, but it is assumed that he was later killed by more Native Americans. Gold fever is what brought many men to the area, but many were run off by Native Americans. The first non-Native Americans to actually settle in the land near the Spearfish River were led by two men, Alfred Gay and J.E. Smith. Spearfish was named for the river that gave the city its life supporting water. The river was given its name by the Native Americans who loved to spear the fish in the crystal clear waters. In 1876, the township of Spearfish had officially begun.

The settlement was soon to be seen as a center for commerce and community. The setting was ideal. The river provided a water supply and irrigation for farming. It was a quiet atmosphere removed from the tawdry reputation of such cities as Deadwood, Lead and Central City. In 1876, the first building was erected. It was a log cabin that started a trend for more and it soon became apparent that Spearfish was going to grow and would need protection from the Indians. A stockade was built and it protected the people of Spearfish from attack during the winter of 1876-1877. In 1877, the Sioux title brought an end to Indian hostilities and Spearfish could concentrate on growing.

In 1877, the first store was opened and also a United States post office. By the 1890 census, the population of Spearfish had grown to 671. Because of this growth, Spearfish seemed a perfect place for a Federal Fish Hatchery. The fish hatchery, now known as DC Booth Historic Fish Hatchery was completed in 1899 and has since then supplied millions of trout to the Black Hills waters. Spearfish seemed to be a place of great interest for many. Soon, tourists were drawn to the grandeur of Spearfish Canyon, a National Scenic Byway. Frank Lloyd Wright once commented that Spearfish Canyon was more interesting and miraculous than the Grand Canyon and he termed the combined elements of its limestone walls, flowing river and trees as the "Spearfish Ensemble." In 1897 a petition was submitted to build a roadway through Spearfish Canyon. When the road was completed in 1930, it became known to all that Spearfish was on the way to great cultural and economic growth. In 1883, the Spearfish Normal School was established. Now known as Black Hills State University, the school is a major employer of Spearfish residents and has been a great asset to Spearfish and is well known for producing high quality teachers. 1906 brought the establishment of Matthews Opera House, the center of entertainment in Spearfish. The opera house stands today, and is still as enjoyable as ever as it offers professionally produced theatre and musical performances year round. The ground floor art gallery space hosts regional and nationally known artists of all types of medium and subject matter.

The premier arts element in Spearfish from the 1930's to 2009 was the Passion Play, performed in an outdoor amphitheater on an east facing slope during the summer months. Visitors from throughout the United States attended this summer tradition as the story of the last days of Jesus Christ unfolded in this breathtaking setting. Upon its closing, speculation about the future of the amphitheater began for what it may become. It is the city's desire to see the revival of this venue with a new use that will again attract a national audience to experience quality, family entertainment.

Spearfish took its name from a rather apocryphal incident of the early days. One old-timer was supposed to have remarked to another as he stood on the banks of a stream, "This would be a good place to spear fish," and forthwith the creek and the future town were named.

The nickname of Spearfish is "The Queen City," because the hills surround it like a diadem. To the East, overlooking the town, is the lofty peak of Lookout; to the West is Crow Peak; and to the South, Spearfish Mountain.

Spearfish lies on both sides of Spearfish Creek, at the mouth of Spearfish Canyon. It is not an industrial town but an important tourist center, the tourist business ranking high in the town's activities. There are five tourist camps in town, including the municipal park. One of these, the Central Cabin Camp near the depot, has an interesting collection of petrified wood and fossil specimens.

The municipal tourist park is in two sections. One of these is a cabin camp just opposite the U.S. Fish Hatchery. The other, without cabins, serves as a city park as well as a place where tourists may pitch their tents or park their trailers. It is one of the most attractive parks in The Hills. Bordering Spearfish Creek and faced by a rock cliff on the other side, it is shaded by green trees. Red squirrels and robins glean the scraps that visitors leave. Campers may catch trout within a few yards of their tents.

There is also a community building with a good collection of native and other curios. A store supplies the needs of the campers and gas for cooking, as well as laundry facilities. There is a large dance pavilion in which dances for the townspeople are held weekly.

Just south of the city park is the U.S. Fish Hatchery, established in 1899 for the purpose of hatching fish with which to stock the streams and lakes of the Black Hills region. This hatchery is now engaged in the propagation of brook, rainbow, Loch-Leven and black-spotted trout. A brood stock of rainbow and brook trout is maintained at the hatchery in open ponds. This stock supplies part of the eggs from which the small fish are hatched to be used in stocking streams. Additional eggs of these species are sometimes shipped to this hatchery from other States.

The Spearfish hatchery raises approximately 2-1/2 million fish each year, varying in size from two to five inches. These fish are supplied to any person free of charge for stocking public waters. There is one commercial hatchery in Spearfish which sells fish to hotels and restaurants.

The Black Hills region is the only part of South Dakota where trout are found in great numbers, although they are found to some extent in the waters of the Pine Ridge and Rosebud Indian Reservation. The reason for this is that only clear, cold water is suitable for this species.

Spearfish has a golf course, a modern high school, a volunteer fire department, a hotel and a moving picture theatre.