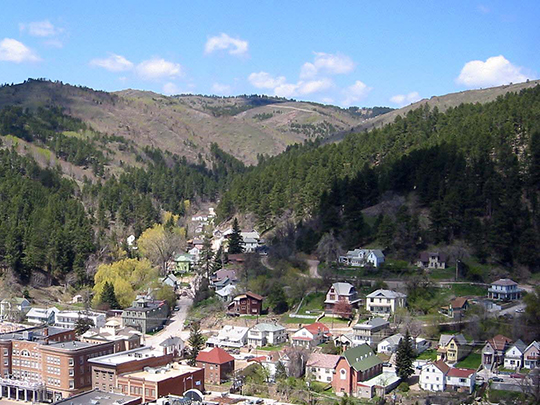 Deadwood, historic mining town of gold rush days, has a most unusual location. No one who has stood on the rocky ledge of Mt. Moriah cemetery and looked down at the substantial little city in the gulch can ever forget the sight of this compact small community where the closely set pine trees vie with dwelling houses for possession of the steep slopes on either side. Deadwood is a town of one main street, the narrow bottom of the gulch having no room for more; and that one street is needed for the business section. So the houses must climb the steep sides of the gulch on either hand and the roads that lead to them form so many terraces. Where the gulch divides toward the upper end of town, the buildings follow both valleys, the business houses below and the residences above; while at the lower end of town, the valley becomes so narrow that the road itself is forced to leave the stream and wind its way up the almost perpendicular hillside. Above the famous Mt. Moriah cemetery, with its graves of Wild Bill and Calamity Jane, tower the glistening pinnacles of the White Rocks, from which, northward, can be seen the gleaming line of the Slim Buttes, 100 miles away.

Every year the "Days of 76" celebration draws aside the curtain of the years that would dim the memory of hard-bitten men drawn by the lure of gold from the far corners of the world to the wilderness that was Deadwood. For a brief time during the month of August there are festivities that may invoke the ghosts of those whose glasses clinked in the old Green Front Saloon to the strain of a prospector's fiddle. The program is keyed to recall the easy abandon with which gold dust and nuggets were "swapped" for liquor and other camp entertainment. The swinging doors, painted front and wooden sidewalks of the old saloon have disappeared, but the memory of the pack mules with bulging saddle-bags, of men and women, loud with energy and hope, lives anew through "Days of 76."

Each morning of the celebration, over the paved highway, which follows the same course that the first placer miners picked out through the gulch, there winds a mile-long historical parade. Ox teams, covered wagons, stage coaches, sidesaddle girls, a prospector with his pack mules, Sioux Indians in native dress, Preacher Smith killed by the Indians, Calamity Jane, Poker Alice, Wild Bill Hickok, and Jack McCall who shot him in the back, march up Main Street. Wild Bill is shot; in the evening his murderer, Jack McCall, is tried by a miners rump court and acquitted. The night life of the mining camp is revived. There are gay dance hall girls, and a carnival. In the Bucket o Blood, the Deadwood of 76 is rebuilt. There are saloons where games of chance, faro, poker, and roulette wheels may be found. And after the "Days of 76" are over, Deadwood reassumes her sober mask.

But it is only a mask, for Deadwood of the present is the same mining town of 76 for all its modern trappings. Because the business of Deadwood always was and always will be gold. And gold never loses its glamour or fascination, nor the things with which it is so richly and closely associated.

Deadwood still has her saloons and dance halls which operate under the name of "night clubs." And glasses still ring and cards continue to slide across tables for a price, whether that price be gold dust or crisp bills and silver dollars. But Calamity Jane, she who carried her gun on her hip and bought drinks for the boys, might be a bit disgusted with the feminine antics of her modern sisters; certainly she would have scoffed at the conventional chains that curtail their freedom over the streets of the old gulch. The general social life of Deadwood swings around its night clubs. Some of these, known at one time the country over as rough mining resorts, are now the essence of polish and propriety. But Deadwood grew up with glitter, and it cannot quite put away its past.

Deadwood's prosperity rests on a very substantial basis, due to various factors. To begin with, it is the seat of Lawrence County, which contains three cities, rich farming land, irrigated orchards, and valuable mining properties. Then it has a Nation-wide fame and is a magnet for every tourist who enters the Black Hills. In fact, it would be unthinkable to leave the Hills without seeing historic Deadwood. In the third place, it shares in the prosperity of its larger neighbor, Lead. And lastly it has the reputation all through that region of being a liberal, more or less "wide open" town, a reputation it has held from the beginning and still holds. It has, it is true, spasms of virtue at times, but, like many another penitent, it finds it difficult to hold to the narrow way. As long as its guests do not infringe upon the rights of others, they are welcome to avail themselves of those pleasures which Deadwood so freely offers.

Such is Deadwood, the most famous town not only in the Hills but in the State; for people all over the country have heard of this little town of thirty-six hundred inhabitants in the northern Hills. The reason for this lies in Deadwood's history, both true and false. Thousands of boys have read millions of words about Deadwood Dick's adventures and Deadwood itself has always been synonymous with adventure, with the old frontier, and with gold.

In 1874 Ouster's expedition discovered gold on French Creek, near where Custer stands. At once various parties set out for the Hills, but many were turned back by the soldiers since this was at that time Indian country. But in the fall of 1875 the Government, after a fruitless parley with the Indians, no longer offered any objections to the entry of white gold seekers and the latter poured into the Hills from every direction in the turbid flood which only a gold rush knows. Most of them went to the southern Hills, where gold had first been discovered. But late that same fall John B. Pearson of Yankton penetrated the northern Hills and discovered rich placer diggings in Deadwood Gulch. That winter the snow was very deep, with little communication, and perhaps Pearson kept the good news to himself. At any rate it was March of the next year before word of the rich gold strike got out. At this time Custer was said to have a population of 7,000. When word of the strike in Deadwood Gulch reached it, the town was depopulated almost overnight. It is said that less than 100 people remained. There was a mass movement northward through the Hills and Deadwood was born, taking its name from the gulch in which it lay, which in turn was named for the dead timber of some forgotten fire.

There were 25,000 people up and down that narrow gulch before the end of the summer and the new town had to meet their needs. It would probably be impossible to overdraw the glamour of those early Deadwood days and that first summer in particular. There were the usual accompaniments of a gold strike — saloons, dance halls, brothels, and gambling houses. There was an unusually colorful assemblage of individuals, even for that time and place. Wild Bill, Calamity Jane, and Preacher Smith walked the streets, together with an assortment of men who were glad to be there because their presence was undesired elsewhere. The most momentous happening of that summer, and indeed of all Deadwood's history was the shooting of Wild Bill. Next in importance perhaps came the killing of Preacher Smith by the Indians while on his way to Crook City. Of the three most noted personages of that summer, two died in their prime and the third, Calamity Jane, out-lived her environment.

In the early years of Deadwood's prosperity, profits were high, and gold plentiful. Each miner carried his buckskin sack filled with gold dust, which he squandered recklessly. One big miner scattered the contents of his gold sack on the streets to see the people scramble for it. Flour cost $60 per 100 pounds, wages were from $5 to $7 a day; while mine owners made small fortunes in a short time.

By the year 1879, the town had outgrown the canyon and had already started climbing the mountainsides of Deadwood and Whitewood gulches. On the night of September 25th, a fire which originated in a bakery on Sherman Street spread to a hardware store next to it. In the latter was stored a great deal of black powder which exploded, sending cinders all over the wooden buildings of the little gulch. Having no water system, miners and merchants alike stood helpless and watched their town burn. But in spite of the fact that it lay hundreds of miles by wagon road from its nearest base of supplies, the town was soon rebuilt.

During the winter of 1883 the snowfall had been unusually heavy and had melted but little; then followed warm rains, swelling Whitewood and Deadwood Creeks until the town was flooded and much damage done. Strong retaining walls have since been built on Deadwood Creek, harnessing the stream, black with mill tailings, to its course through the heart of the city.

As with all boom mining towns, Deadwood s greatest glory was in her first years. When the placer diggings became exhausted, many miners left. A new gold strike in Lead, which was later absorbed by the Homestake Mining Co., attracted still other inhabitants of the older town. But in 1887, with a silver boom in the nearby towns of Carbonate and Galena, Deadwood experienced a rejuvenation. In like manner, in 1894, when the price of silver declined, Deadwood slumped in population to a total of 1600. Later a smelter was built and the Golden Reward erected its plant and reduction works in the town. A cyanide plant was constructed for the Rossiter Mill. These activities brought about a revival of prosperity for a time. But this came to an end with the strike of 1909, which closed all the plants, and only the Golden Reward reopened.

Deadwood shared in post-war prosperity and since then has progressed steadily and rapidly. This is particularly true of the years, 1934-37, for Deadwood's prosperity is closely linked with that of its larger neighbor, Lead, only 3 miles away and with a population of almost 8,000. When the United States went off the gold standard in 1934, the price of gold rose substantially and this brought such prosperity to the Homestake that, in addition to the high wages that it habitually paid, it gave bonuses to its employees twice a year. This has brought a boom period to Lead, which in turn has found its reflection in Deadwood business conditions.