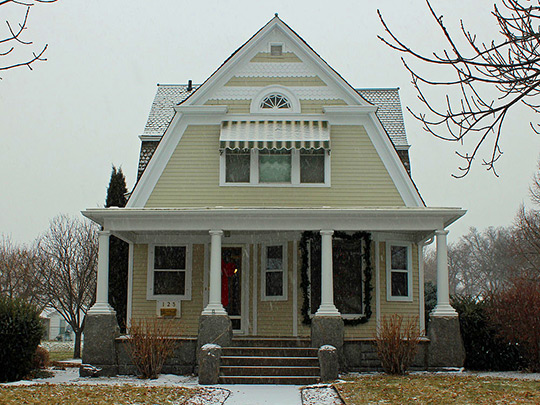 Pierre, (pronounced "peer"), second smallest capital city in the Nation, is in the approximate geographical center of South Dakota and North America, and stands where the East-river farming section of the State merges with the West river ranching country. At this natural and geographical "transitionary" point lies Pierre, neither eastern nor western. Here the West-River rancher with his typical broad-brimmed hat, dark shirt and high-heeled boots rubs elbows with the East-river farmer, the business man, and the Government official, giving a dual character to the town.

Pierre is spread out along the broad Missouri River, with rock and yucca-covered gumbo buttes bordering the town to the north and east. In the center of town on a plateau is the State Capitol, its dome dominating the landscape. Part of the town is on a rise of ground between the river bottoms and the buttes; the reason for Pierre being so spread out is the result of rivalry between early land promoters. Owners of land "on the hill," the section of town north of the railroad tracks, battled the owners "on the flat." Each sought to encourage expansion their way, but the town insisted on growing up between the two sections. Today the many-windowed Hyde Home stands lonesome guard on the northern fringe of the city, and pretentious homes of eastern capitalists are grouped at the extreme city limits to the east and south.

In spite of years of progress and development, Pierre remains a frontier town in many respects. Progress, with its backbone of brick and steel, has made substantial headway, but a walk through the business district, where modern brick stores have as neighbors squatty, false-front frame buildings, emphasizes the old-new compromise.

Pierre claims to be the only city on the Missouri River owning its entire stretch of waterfront, which it has converted into parks. The city also owns and operates its own light and power plant, natural gas business, water system, liquor store, auditorium, tourist camp, swimming pool, and a recreational park at Farm Island. Although much of the city's revenue is furnished by State and Federal pay-rolls, the basic source of its prosperity is the livestock industry. A self-curing buffalo grass makes grazing profitable are, for the most part, in either of two groups: those who hold State or Federal positions, and those who have permanent homes and businesses. The first group is migratory, changing with each administration; the other consists of early settlers, their grown children, and business and professional men who have been attracted by the steady incomes. The social life is centered around the State and political balls. There are numerous social clubs and those for recreation such as country clubs, polo and riding clubs, and skeet shooting organizations.

The town received its name when J. D. and Anson Hilger of Bismarck consigned a shipment of lumber and household goods down the river in 1880 to "Pierre, on the east side of the river, opposite Ft. Pierre." At that time Pierre was simply a ferry landing for the bustling town of Fort Pierre across the river. Upon the arrival of the Hilger barge, Napoleon Duchneau and two other ferrymen paid a social visit while the brothers had gone off seeking a likely-looking homestead claim. A three-gallon keg of whiskey was discovered among the boxes, and a jamboree was staged in the absence of the owners, after, which the ravine was promptly called Whiskey Gulch. The incident in Whiskey Gulch, north of the present railroad bridge, typified the spirit of the early eighties, as whiskey and guns were staple articles of trade and figured in many land deals and purchases of food and clothing. Joseph Kirley, who with Duchneau ran the ferry, paved the way for the first railroad by trading his squatter claim along the river to the Chicago & North Western railroad for a double-barreled shotgun.

Before the first train arrived in 1880, the little town was recognized as a convenient stopping-off place when making the long stagecoach or ox-train trip to the Black Hills. And with the coming of the railroad, Pierre became the mecca for bull-whackers, soldiers, gamblers, prospectors, ranchers, settlers, and notorious outlaws. With persons of every description contributing to Pierre's prosperity in the early eighties, law and order battled with turmoil and confusion. A severe blizzard marooned the town from the world for five months, while pent-up emotions of outlaws found release in riotous plundering of limited supplies. Citizens formed the Pierre Vigilantes, rounded up the desperadoes, and sent them down the river.

In 1881-82 the town boomed as the surrounding country was settled and Pierre became the center of a large trading area as well as the terminus of the railroad. Nearly $1,000,000 were spent in one year as the rival land promoters fought tooth and nail for choice building lots, speculating as to where the railroad would build its bridge across the Missouri. Mostly unpainted and with protecting porch-effect roofs extending over board walks, Pierre was a thriving frontier town when incorporated in 1883.

After losing to Bismarck in 1883 for the Dakota Territorial capital, Pierre set out to be the State capital and won in 1889 when South Dakota was admitted to the Union. Once possessing the distinction, Pierre had to fight to keep it. A bitter struggle developed when Mitchell tried to wrest the seat of government from Pierre. The railroads serving the two towns got into the thick of the battle. Thousands jammed Pierre and Mitchell on free railroad passes; hotels and rooming houses were packed. When the smoke cleared away after the 1904 election Pierre settled down to a well earned rest, still the Capital City.

In 1907 the North Western railroad extended its line west to Rapid City. This, with the opening of the Sioux Indian lands west of the river, increased Pierre's business. It was not until 1927, however, that a highway bridge connected Pierre with the ranching country. Three years of drought 1934-36, while making inroads into the prosperity of most South Dakota cities, affected Pierre only slightly in comparison, the large government payrolls acting as a financial stabilizer.