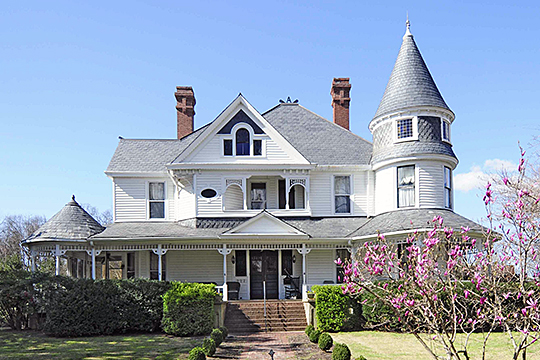 Rock Hill's first post office was opened in 1852, the year the town was established. During the last quarter of the 19th century Rock Hill grew from a crossroads to one of the fastest-developing cities in the South Carolina Piedmont. Incorporated in 1890 with a population of 250, by 1891 the number of residents had increased to nearly 4,000. The first of a number of textile mills opened in 1880. Rock Hill was also home to the Rock Hill Buggy Company, later Anderson Motor Company, and to Winthrop Normal and Industrial College. Located directly on a major line of the Southern Railroad, the city was a natural center for the surrounding area.

This pattern of growth continued in the first third of the 20th century. By 1930 the population had risen to 11,300 with 6,000 more people in the adjoining suburbs. Rock Hill was the largest city in York County, as well as in the adjacent three South Carolina counties. In addition to the retail business that came from the surrounding farming areas, cheap (Catawba River) hydroelectric power helped lure industry such as the City's eight cotton mills, two yarn mills and hosiery mill, as well as one of the South's largest printing and finishing companies.