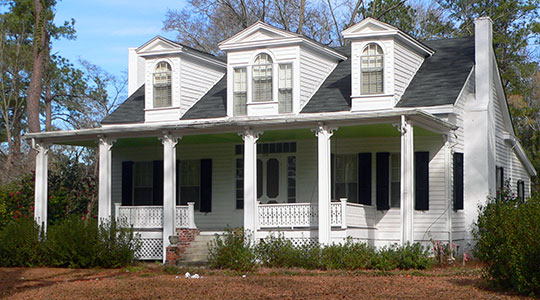 The Colonel John Gotea Pressley House was listed on the National Register of Historic Places in 1997. Portions of the content of this web page were adapted from a copy of the original nomination document. [‡] Adaptation © 2015, The Gombach Group.

The Colonel John Gotea Pressley House, known to many residents of the Kingstree area as the Wylma M. Green residence, was constructed in 1855. It is significant as a largely intact local interpretation of the Greek Revival style with what appear to be Victorian or later embellishments. As an excellent example of a type and form of construction, the house contains a somewhat pronounced version of a "rain porch," an element most often peculiar to houses in eastern South Carolina. In addition, the building and property are significant as the home of Colonel John Gotea Pressley, prominent local attorney, judge, and Confederate regimental field officer. In a town which had its beginnings with the Scots-Irish Williamsburg settlement of 1732 and once boasted numerous eighteenth and nineteenth century architectural examples, this house remains as one of only three extant antebellum residences in the town that are original to their locations. Several others have been moved into the town limits in recent years from sites in the county.

The Pressley House, in the overall symmetry of its plan and form, is typical of the Greek Revival style; however, its porch ornamentation contains both Gothic Revival and Italianate elements. Although the decorative sawn brackets on the porch piers may be from the date of construction, it is more likely that they were added during the Hirsch family ownership after the war. The house's most significant design and character defining element, however, is the "rain porch." Probably known as such because of the additional protection the wider, overhanging roof afforded antebellum residents in their "outdoor living rooms" during summer rainstorms, the rain porch appears as a vernacular form almost exclusively in South Carolina's northeastern quadrant. Although the origin of the form remains unknown, the rain porch's recessed, balustraded deck located behind or well within freestanding columns, posts, or piers is evidence of a need for adaptation to climatic conditions in this part of the state. With few if any exceptions the form has only been observed and recorded in the area north of the Santee and east of the Wateree and Catawba rivers. Most examples are less pronounced, however, than in the case of the Pressley House. The only other significant and extant example within the town of Kingstree is the ca. 1843 Scott House, at 506 Live Oak Avenue (listed in the National Register in 1982). Other examples in Williamsburg County include the ca. 1847 John Calvin Wilson House near Indiantown (also listed in 1982), New Market or the Rhodus-Lesesne House (ca. 1825) near Greeleyville, the ca. 1835 Samuel Ruffin Mouzon House near Kingstree, and the J.J.M. Graham House (1830s-40s) near Cades. Within the region there are the Judge McBride McFadden House near New Zion, in Clarendon County; the 1823 Red Doe Plantation near Florence (listed in 1982); Bonnie Shade (ca. 1854) in Florence (listed in 1978); the 1857 Rankin-Harwell House or The Columns (listed in 1974); Tanglewood (ca. 1831), Bloomsbury (ca. 1850), Holly Hedge (ca. 1842), and Horsebranch Hall (ca. 1840), all listed within the Camden Historic District in 1971 (Kershaw County); the ca. 1790 Buckton Plantation near Boykin in lower Kershaw County; the ca. 1825 Robert McFadden House in the Concord community of Sumter County; and Mont Clare (ca. 1813) and Wilds Hall (1840s), both in rural Darlington County. While the properties enumerated above that are listed in the National Register were described in their respective nominations as having porches of this type, none were nominated specifically as excellent examples of this form. It is a form that has been adapted to both modest and grand houses, but one that enhances the proportions of the more modest residences, such as the Pressley House, as its piers rise uninterrupted from grade to porch roof.