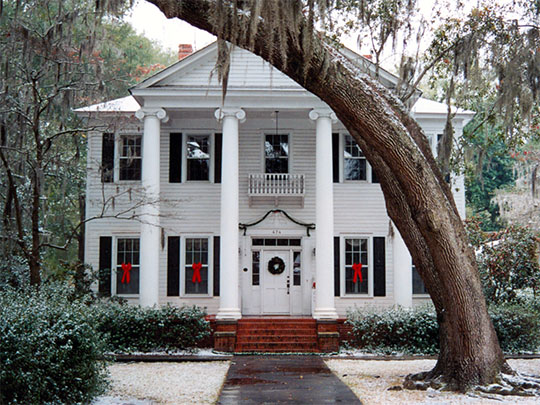 The Walterboro Historic District was listed on the National Register of Historic Places in 1980. Portions of the content on this web page were adapted from a copy of the original nomination document. [‡]

The Walterboro Historic District consists of a large portion of the historic residential areas of Walterboro, including thirty-three buildings of particular historical or architectural significance, and one hundred and forty-two supporting buildings. Primarily residential, the district also includes religious, educational, public, and military buildings. Vacant land from the original scattered pattern of development in Walterboro has been gradually occupied over generations, so that most areas of the district include buildings representing a variety of architectural periods and styles. The majority of the buildings date from the early nineteenth century to before World War II. Most of the buildings located within the Walterboro' Historic District are in use and have been kept in good repair.

The District contains a wide range of architectural expression, from antebellum residences and Victorian bungalows to Gothic Revival churches and Colonial Revival houses.

A substantial number of the summer homes built in the first decades of the 19th century have survived. These are primarily of two types: the one-story gable-roofed frame cottage, raised on brick piers, with a central hall plan and a veranda across the facade; and the two-story variant on the same plan, with one or two tiers of veranda. The Fraser House is an example of the first type; the Glover-Mcleod House is a good example of the second.

Another type, originating in the latter part of the antebellum period, is the Greek Revival house with its gable roof masked by a high wooden parapet. The Fripp House, which has an applied Greek key pattern embellishing its parapet, was imitated in the twin Wichman houses, built two generations later.

Walterboro's surviving historic churches, all dating after the 1879 cyclone, include St. Jude's Episcopal, St. Peter's A.M.E., and the Episcopal Church of the Atonement, all frame interpretations of Gothic Revival design.

Around the turn of the century, a building boom resulted in the construction of numerous decorated cottages, many of which survive. The O.T. Canady House at 109 Carn Street, one of many built by Q.T. Canady in Walterboro, is exemplary of the type, featuring turned veranda posts, an applique frieze, a bracketed cornice, and a high front cross-gable, with a louvered attic vent.

The Colonial Revival style was popular in Walterboro during the first part of the 20th century. The Padgett House displays characteristics of the Colonial Revival, as well as the influence of the Queen Anne style.

The congregation of large numbers of residences, exemplary of the predominant styles of the 19th and early 20th centuries, amidst a literal forest of oak trees, punctuated by the educational and religious centers of the town, form a cohesive district, one that has admitted growth in recent years without losing its historical significance.