Photo: Central Corridor of the Westminster Arcade, ca. 1828, 130 Westminster Street, Providence, R.I. Listed on the National Register of Historic Places in 1971, it was designated a National Historic Landmark in 1976. Photographed by User:Nutmegger (own work), 2006, [cc0-by-1.0 (creativecommons.org/publicdomain/zero/1.0/deed.en], via Wikimedia Commons, accessed January, 2014. 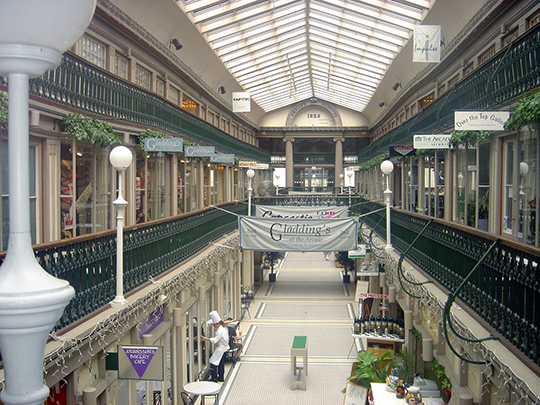 Built in 1828 the 3-level Westminster Arcade (The Arcade), located in downtown Providence's financial district, is the oldest indoor shopping mall in the U.S. Succumbing to the poor economy, the arcade was closed in 2008. Developers (Westminster Street Associates, LLC) began an adaptive reuse project in 2012. The arcade is now home to restaurants on the first level and 48 micro-apartments on levels 2 and 3. The 1-bedroom apartments range from approximately 225 to 540 sq. ft. Rents (as of early 2014) start at $550/month.

The Arcade (130 Westminster Street and 65 Weybosset Street) was listed on the National Register of Historic Places in 1971. It is designated as a National Historic Landmark.

The Westminster Arcade is a well-preserved example of an early 19th-century business arcade, and an important early example of the Greek Revival style in Rhode Island.

The building was originally owned jointly by Cyrus Butler and the Arcade Realty Company. When the building was threatened with demolition in 1944, it was purchased by investors.

Architect James C. Bucklin [1801-1880] was responsible for the Westminster Street half of the building. Bucklin served an apprenticeship with John Holden Green and later entered partnership with William Tallman, a builder and dealer in lumber. Architect Russell Warren [1784-1882] was responsible for the Weybosset Street half. Warren was born in Tiverton, Rhode Island and was a resident of Bristol. He was a self-trained architect and the earliest exponent of the Greek Revival style in Rhode Island.

Overall dimensions: 216' long, cross shape plan with short wings at the center on either side; porticoes at each end, 74' wide, 15' deep and 3 stories high. The arcade foundation is granite, the walls, smooth faced, regular coursed ashlar, granite.

The building was laid out around a central corridor extending the entire length of the building, 3 stories high with balconies serving the upper 2 floors, covered with a skylight the full length and width of the corridor. Small, regularly-spaced shops and offices were located off the corridor and balconies.