Photo: A former power substation converted into a residence, Oakland Historic District, Burrillville, RI. The Historic District was listed on the National Register of Historic Places in 1987. Photographed by User:Magicpiano (own work), 2013, [cc-by-4.0 (creativecommons.org/licenses/by-sa/4.0/deed.en)], via Wikimedia Commons, accessed June, 2015. 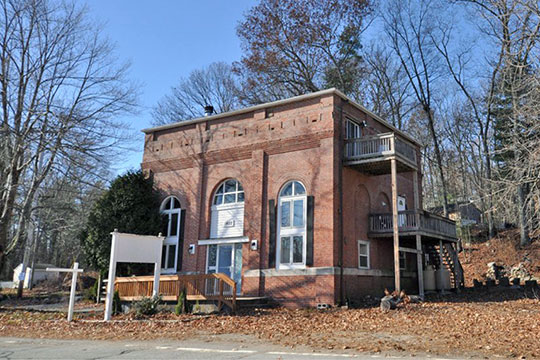 The Oakland Historic District was listed on the National Register of Historic Places in 1987. Portions of the content of this web page were adapted from a copy of the original nomination document. [‡]

The Oakland Historic District is a well preserved rural mill village which illustrates the process of industrialization and its impact on socioeconomic and community development in nineteenth- and early twentieth-century Rhode Island. Such villages are an important part of the State's history and constitute a significant portion of its environment. The district represents both general trends common to other such villages and developmental forces peculiar to Oakland alone. The buildings and sites within the district serve to document the establishment and growth of the mill and of facilities and institutions created to serve the residents attracted by employment opportunities in the mill. As a group, they constitute an example of a typical factory village. The district is an important artifact of social history, reflecting a way of life followed by many Rhode Island residents in past generations. The original portion of the Oakland Mill is architecturally significant as a rare surviving example, the only one in Burrillville, of a stone textile mill, a form of industrial construction characteristic in Rhode Island in the early to mid-nineteenth century. The entire factory complex, notable for its association with the Metcalf family and Wanskuck Company, illustrates a typical pattern for expanding manufacturing enterprises in Rhode Island in the nineteenth century, and is important for its role in stimulating community development.

Prior to the mid-nineteenth century, the Oakland vicinity was a sparsely settled rural area with only one dwelling, erected by Daniel Cooper in 1820 (still standing at 381-83 Victory Highway). The town of Burrillville — originally part of Providence, set off as a part of Glocester in 1731, and incorporated as an independent town in 1806 — had been an agricultural area from its initial settlement in the seventeenth century, but its rugged, rocky terrain and poor soil were not well-suited to cultivation. Burrillville experienced economic decline and out-migration as farming became less profitable here during the early nineteenth century. Between 1830 and 1840 the town's population decreased about ten percent. However, Samuel Slater's success at water-powered cotton spinning at Pawtucket in 1790 drew attention to the industrial development potential of the State's rivers and streams, and in the ensuing decades Rhode Island businessmen showed an eagerness to exploit available waterpower sources, even in relatively remote areas that had not been considered particularly favorable for settlement. The industrial development of its river valleys transformed Burrillville. Between 1840 and 1850, the decade during which the largest number of new factories were established in Burrillville, the population of the town increased over seventy-eight percent. Within this context, John L. Ross 1819-1908, then employed at Whipple's Mill in nearby Mapleville, initiated the development of Oakland. He purchased seven acres for a mill privilege in 1848 and built a dam across Clear River the following year. Though he was sued by the owners of the adjoining mill privileges at Plainville and Mapleville for altering the flow of the river, Ross constructed a three-story, 100 by 38 foot stone mill at the dam in 1850. He first leased the building to the Woonsocket Delaine Company as a worsted goods factory, then in 1853 took over the facilities himself to manufacture cotton yarns and satinets. This enterprise must have been successful, for Ross built a 32 by 40-foot addition to the east end of the mill in 1856 and an ell on the main building four years later. In 1870 the 1856 addition was extended 54 feet, and a tower and mansard roof were added to the main building.

The early history of Ross Mill illustrates many of the circumstances surrounding the evolution of the textile industry in the nineteenth century. The factory's establishment and its relative proximity to the mill sites at Mapleville and Plainville reflects the aggressive entrepreneurial spirit of this era and the desire to utilize every available resource. The dispute over water rights is characteristic of this period, when the obtainment of sufficient water power critically affected a company's productivity and prosperity. Ross's initial decision to lease the mill is not unusual. Some owners of riverfront land chose not to become directly involved in manufacturing, but instead erected mills which they administered as income-producing property.

Once the mill was built, housing had to be supplied for the laborers and their families. Old maps document the early growth of a little village of ten or twelve buildings near Ross' Mill. Most of the structures were arranged along the short street now Mill Street leading from the main road today's victory Highway down to the factory, while three or four buildings were sited along victory Highway north of the Mill Street intersection. Some of the houses now standing on the street were probably built shortly after the construction of the mill in 1850, and later altered. The dwellings at 15, 16, 21, 22, 25, and 26 Mill Street are most likely to be the survivors from this period; though they resemble two houses obviously constructed later, they are differentiated from the other dwellings by their granite-block foundations. The double-house form used for these early dwellings and a number of the later residences here is typical of Rhode Island mill villages. In this State, industrialists commonly employed women and children in the factories as well as men, and families constituted an important component of the labor pool. The need to shelter entire families precluded the widespread use of boarding houses and contributed to the adoption of the double house as the, standard for mill village housing.

In addition to dwellings, one map shows a bank, the other a store—possibly the same building—on Victory Highway, but it is impossible to associate these designations with any of the structures standing here today. By 1862, a highway extended from the village to Plainville and Harrisville, following the alignment of the present School Street and the northern section of Whipple Avenue. The little hamlet was known as Oakland, reportedly named for the many oak trees in the vicinity. Ross made his home in Oakland until 1867, when he moved to Pawtucket.