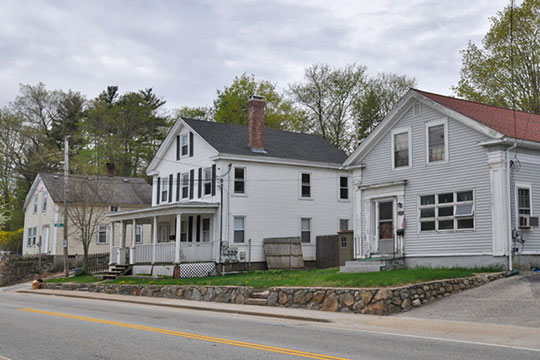 The South Main Street Historic District was listed on the National Register of Historic Places in 1987. Portions of the content of this web page were adapted from a copy of the original nomination document. [‡]

The South Main Street Historic District is a linear, residential district in the town of Coventry; it developed largely in the early and mid-nineteenth century and extends about one quarter mile between the South Branch of the Pawtuxet River at the north to a short distance south of Wood Street at the south. Twenty seven of the twenty nine major buildings along the street are residences. At the north end of the district, along the river, is an early twentieth-century factory occupying the site of an earlier mill building. A large metal structure near the north end of the district is the major intrusion.

Although there were six factories operating at one time near the district, few of the South Main Street houses were occupied by mill workers, but rather by people of various occupations—a mill owner, a policeman, a carpenter, a doctor, farmers, the town clerk, and several dealers and manufacturers, including a carriage maker who had his shop on South Main Street. Reflecting this essentially working class population, most of the houses are plain vernacular structures that reflect their Federal, Greek Revival, or Victorian origins with only a minimum of architectural detail or decoration. Of the twenty-seven houses in the district, nine were erected during the Federal era, four were built in the Greek Revival style, eleven were built in mid-nineteenth century, most of these before 1850, and one dates from the late nineteenth century. There are four twentieth-century buildings, two 1920s bungalows, a mid-twentieth-century rural house, and a Veterans of Foreign Wars hall. There are no high-style or architect-designed houses and it is this characteristic of South Main Street—its almost solid line of simple, frame houses—that makes it significant architecturally and historically.

The South Main Street Historic District is a well-preserved fragment of Washington, the leading village in the town of Coventry. The District's appearance is that of a western Rhode Island village which developed over the course of the late eighteenth, nineteenth, and early twentieth centuries.

The district is a relatively intact residential neighborhood that developed along South Main Street in the early years of the settlement of Washington village. Washington is one of many Rhode Island villages that started around a grist and saw mill site or a highway then experienced its period of greatest growth and development in association with the establishment of textile factories, beginning in the early nineteenth century. The village development pattern that included stores, banks, taverns, a post office, churches, and schools, as well as a variety of residential buildings, following in the wake of factory construction, is a common one in the state. In Washington, most of these public and private institutions were built along Main Street. South Main Street, except for a factory at its northern end, became an almost exclusively residential street, and has remained so to the present.

South Main Street's character is further reinforced by the architectural quality of its constituent buildings that are, with a few exceptions, stylistically plain or vernacular. Its significance lies in its tightly-knit streetscape, its uniformity of siting and massing, and its strong nineteenth century identity. It is a well-preserved slice of history.

The houses set along both sides of South Main Street are good examples of the Federal, Greek Revival, and Victorian styles in their vernacular modes. Most are rectangular, box-like, wood frame structures; their stylistic references usually limited to entryway treatments. Though plain, they are testimony to the skill of Rhode Island's anonymous country builders.

Little building took place here after about 1860, and the few later buildings are architecturally compatible with their predecessors. Despite radical changes on Main Street at the center of the village—destruction of old buildings and construction of new ones, especially commercial structures—South Main Street has survived as a rare streetscape and an important artifact of the town's history.

Coventry, originally part of the town of Warwick, was laid out in four tracts between 1701 and 1735. In 1741, Coventry was incorporated as a town, and about that time roads were laid out from Narragansett Bay to interior Rhode Island and Connecticut. The Country Road, established by the General Assembly in 1742-43, was laid out from Apponaug through Centreville, Quidnick, Washington, and over Bowen's Hill to Connecticut. Another highway connected the old settlement of Warwick at Coweset, on the Bay, with Tiogue, Maple Root, and Hopkins Hollow in western Coventry. The site of Washington village thus lay between these two major east-west roads.

Eighteenth century Coventry was dominated by agriculture. Farmers and their families comprised most of the population. The scattered farmstead were serviced by small, water-powered grist mills that ground grain, mostly corn, and by saw mills that manufactured lumber used in the construction of buildings. Francis and Thomas Brayton, the first recorded settlers in what is now Washington, came here from the Island of Rhode Island Aquidneck Island, and in 1765 they purchased a large tract of land. Each man built a grist mill, on the opposite bank of the river near the present bridge. Thomas Brayton later had a fulling mill, and there was also a saw mill operating here in the eighteenth century. Another fulling mill was established by Judge Stephen Potter. The small settlement, known as Braytonville at that time, had five houses in 1795.

Potter's house, no longer standing, was probably located on South Main Street, then merely a cart path connecting the two east-west highways; the other houses were north of the river. In 1797, Henry Whitman purchased from Thomas Brayton two grist mills, a saw mill, a fulling mill, and half the water power here; the other half was owned by Judge Isaac Johnson and William F. Potter.

At the turn of the eighteenth century, Braytonville was still a hamlet, but the industrial revolution that started with the Slater Mill in Pawtucket, Rhode Island, in 1793, was about to sweep through rural Rhode Island. In 1806, the first textile mill in Coventry was established along the South Branch of the Pawtuxet at neighboring Anthony Village. Within the next fifteen years, another five textile factories were erected in Coventry. In Braytonville, Henry Whitman sold his mill property and water rights to Peleg Wilbur, Colonel George Arnold, Caleb Kilton, and John Bissell in 1809. They formed the Washington Manufacturing Company, which gave the village its name.

The Washington Company built its first mill about 1810 at the intersection of Main and South Main streets. Its fifteen hundred spindles made it a relatively large factory for the time. Another mill was erected about 1810 by Thomas Whipple and Colonel Peleg Wilbur. A small, wooden structure along the south side of the river downstream from the bridge, it manufactured yarn and cotton cloth. About 1813, Hines and Arnold constructed a two-story machine shop which employed sixty men in the manufacture of machinery for the factories of the Pawtuxet Valley. As Cole reported in his 1889 history, "The factories and this machine shop made Washington one of the liveliest villages in Rhode Island."

In 1818, the Bank of Kent was incorporated. It was located at the northwest corner of South Main and Bank streets at the north end of the district. The bank failed in 1867; its building is no longer extant. A store was established at a very early date, as was a tavern, referred to as Brayton's Tavern, and many houses were built. Judging by architectural styles there were ten houses erected along South Main Street before ca. 1830, nine of them within the district; they include modest one-and-a-half-story cottages and some larger two-and-a-half-story houses.

The Hines and Arnold Machine Shop failed after a few years; it was operated by a number of men, including Russell Chace, and became known as Chace's Mill. In 1826, the Washington Company's factory was destroyed by fire; it was rebuilt in 1827 in an enlarged form. The two- and three-story structure operated between four and five thousand spindles. Thomas Whipple built a mill in about 1828.

In 1831, when the village was identified as "Washington Factories," the Washington Methodist Church was erected on Main Street by a society that was organized in 1823. About 1833, John J. Kilton erected a two story building, operating about thirteen hundred spindles, along the south bank of the river and along South Main Street, opposite the Washington Mill. A school house was built in 1844 on Cady Street, just off South Main Street, to serve the growing population in this area. Along South Main Street, about fifteen houses date from this period. The Coventry National Bank was established along Main Street in 1852, and in 1856, the Hartford, Providence, and Fishkill Railroad began service through the village, its tracks running through the northern part of Washington. Benjamin Moon built a Factory along Main Street, which took his name, and he also purchased another small factory across the river for use as a saw and shingle mill.

In 1862, J.E. Kilton owned the two Washington Company factories, one on Main, one on South Main Street. The Bank of Kent stood nearby and South Main Street was lined with an almost solid row of houses from the river to beyond Wood Street. By 1870, Main Street also was lined almost solidly with buildings which included a town clerk's office, a store and post office, another store, and the Methodist church. Four mills were operating. Kilton's Mill north of the river, with fifteen hundred spindles and twenty-three employees, bleached shirtings; the cotton mill across the river, with forty-five hundred spindles, was run by sixty-two workers. Benjamin Moon's factory along Main Street operated thirteen hundred spindles and employed twenty hands in the manufacture of twines and warps, and the Chace Mill Company, along the river, with twenty-seven hundred spindles and thirty-eight workers, manufactured cotton printing cloth. In 1872, the Coventry Savings Bank was incorporated. At about this time, South Main Street contained a mixture of inhabitants. Among the most prominent were the owner of the Kilton Mill, a state senator, and the town clerk; others included carriage manufacturers and dealers in coal, wood, harnesses, and other implements and goods, doctors, farmers, grocers, a carpenter, and a policeman.

In the 1860s, Washington was Coventry's largest and most prosperous village, a thriving rural center. In 1878, however, only Moon's mill was operating; the others were idle. Noah Arnold, in his 1888 account of the Pawtuxet Valley, said that the village, with between eight hundred to a thousand inhabitants, had three factories running. The Chace factory, he reported, had burned a few years earlier. Only one house was erected in the district during the latter part of the nineteenth century.

In 1907, the Moon Mill burned, but the Washington Company mills continued operating. A 1937 guide to Rhode Island described Washington as a thriving community with a population of twelve hundred and containing several mills that manufactured lace, cotton, and woolen goods. Some time after this, the large mill on Main Street was demolished; its site is now occupied by a gasoline station; other buildings in the center of the village, most built before 1860, were demolished to make way for commercial buildings in the mid-twentieth century. The Kilton Mill on South Main Street was replaced in 1914 by the Stillwater Company Mill, a typical structure of its era, of brick, with large windows and a flat roof. In the South Main Street District, four buildings (two early-twentieth-century cottages, or bungalows, a mid-twentieth-century ranch house, and a Veterans of Foreign Wars meeting hail) were added to the streetscape.

Today, Washington continues its role as the town's most important village, and includes a new town hall, churches, and many commercial establishments, some in a mid-twentieth-century plaza at the village center.; South Main Street, as in the past, remains a relatively quiet, residential neighborhood, the best preserved section of the old village and a readily identifiable concentration of historic buildings. Its nineteenth-century streetscape remains essentially intact, conveying to the traveler along the street a sense of passing through a distinctive place.