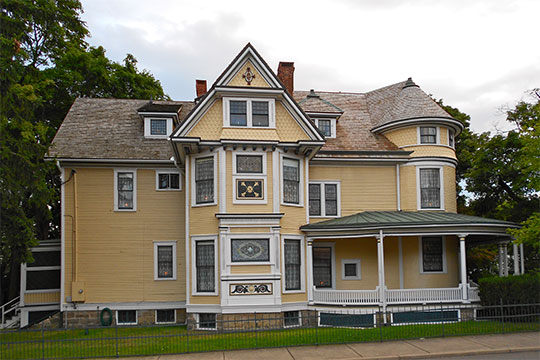 The Israel Platt Pardee Mansion (235 North Laurel Street) was listed on the National Register of Historic Places in 1984. Portions of the content on this web page were adapted from a copy of the original nomination document. [1]

The Israel Platt Pardee Mansion is located in the older section of Hazleton an area formerly known as Pardee Square. The property sits on a corner lot approximately 75' x 190' and is fenced on the two street sides by the original wrought iron fence. The front faces Laurel Street and is noted by a huge tin roofed wrap around porch of 80' in length. The front door is 5' x 9' of oak with 12 beveled glass windows. The original front window wood shutters are also available to be hung. The turret extends from floor 1 to floor 3 and has 4 curved glass original plate windows. There are four Tiffany type original windows (dining room and two bedrooms) visible from the street. Approximate house dimensions are 50' wide, 75' long, and 50' high, enclosing 5500 square feet (excluding basement). The house is of clapboard design, fully plastered with 10" walls. Upper exterior portions have fish-scale designed siding (all original). The roof is red cedar individual split shingles plus tin decorative ridging.

The carriage house (28 Aspen Street) is a 30' x 65' cedar clapboard structure which originally housed the caretaker. The bottom is a garage with original 1-1/4" oak tongue and groove ceiling. It has the original wood work benches, raised wood platform for horses and underground gas pump plus boiler room. The upstairs is the caretakers apartment which has 2 bedrooms, living room, kitchen and enclosed sun porch.

The architect was George W. Barber who was a well known pattern book architect of the time. The "Bailey House" in Florida is another of his homes on the National Register.

The main house is a large 19 room Queen Anne Clapboard Victorian. The house is in near mint condition as it pertains to historical and architectural features but shows signs of weathering, inefficient heating, and an old unsafe electrical system. A huge beveled glass oak door leads to a vestibule with inlaid tile floor and opalescent light (all original). A second oak double hutch door leads to a 15' x 17' foyer with large oak fireplace and original wainscotting. Three steps lead up to a turret room landing with fretwork and oak bannister. Double oak sliding parlor doors lead to the front parlor with a carved fireplace. All rooms have 12' ceilings and original 1-1/4" oak floors. The second set of parlor doors lead to the back parlor with a third oak carved fireplace surrounded by original built in oak bookcases. The parlor ceiling has dropped wood archways. There is a hidden office room with an all oak built-in desk, bookcases, and couch. The third set of parlor doors lead to a huge formal dining room containing a built in buffet, stained glass window and original light fixture. The original Pardee oak lions head round table with a set of 7 matching chairs plus the original Pardee oak corner cupboard is here.

Mr. Israel Platt Pardee (1852-1934) had the home built in 1893 by Mr. Barber, an architect nationally known for his Victorian designs. The home served as his only residence and is the only remaining Pardee mansion. I.P. Pardee was the son of Ario Pardee (1810-1892) who was the founder of the city of Hazleton with his building of the Beaver Meadow Railroad in 1833. He was the original pioneer Hazleton coal operator on an organized scale who opened the first mine, laid out the town and marketed the product for fifty years. The firm of A. Pardee and Co. was the largest individual shipper of anthracite coal in Pennsylvania. He endowed the chair of mathematics at Lafayette College with over $500,000 to build "Pardee Hall" which was the largest and most scientific college building in the United States when dedicated in 1873 and he served as Presidential Elector of the college. During the Civil War he fitted a military company at his own expense. This multi-millionaire is buried in Vine Street Cemetery in Hazleton.

The most prominent son, Israel Platt Pardee, continued to be one of the most liberal donors to Lafayette College where an infirmary was named in honor of his mother "The Anna Robison Pardee Memorial Infirmary". He presided as president of Lafayette College for 11 years (1914-1925). I.P. Pardee was a director of the Anthracite Separator Co., the Hanover Fire Insurance Co. of N. Y. and a member of the Wyoming Valley Historical Society and the Bankers Club of New York. He was associated with banking and served as founder and president of the Hazleton National Bank. He died at his home at 235 N. Laurel Street in Hazleton in 1934. His widow remained in the home until 1948 when ownership passed to Dr. George Dornblaser, a surgeon in the city for over 50 years. Shortly prior to his death in 1983, Dr. Dornblaser sold the home to Gordon Muckler and Anna Jean Muckler under the understanding the home would be restored to maintain the original architectural features.

The town of Pardeesville, Pennsylvania, is named after the Pardee family.

"Tributes Paid to Ario Pardee in Press and From the Pulpit." Standard-Sentinel. Hazleton, November 7, 1955.