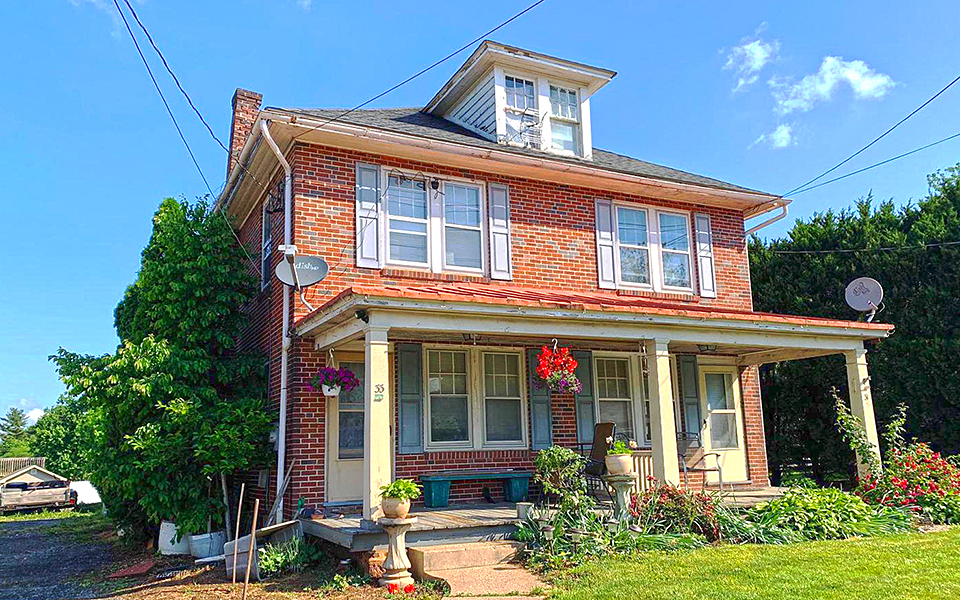 First settled around 1732, Ephrata was incorporated as a borough in 1891 from Ephrata Township.

From the shack of a religious zealot built along the Cocalico, creek 209 years ago, Ephrata has grown to a modern community of 6200 prosperous and substantial citizens who this week [1941] are celebrating the 50th anniversary of the borough's incorporation granted by the Lancaster County, courts, August 22, 1891.

While there are no large fortunes, Ephratians are well off financially, the greater majority owning their own homes while united in the municipal enterprise they own and operate their own electric light plant, their water system, their sewage disposal system, are making a quarter of a million dollar addition to the power plant all of which they hope to pay for in cash as the bills become payable. Administration of public affairs is in the hands of a trained manager.

Situated in the richest section of Lancaster County, Ephrata enjoys the trade of a rural community, numbering well up to 25,000, which year in and year out, through good times and bad, reaps a rich harvest especially in tobacco, a money crop that is in demand when others fall off.

Thus Ephrata rarely experiences the so-called good times resulting from the manufacture of war material. But neither does it plunge to the bottom when boom times cease. Thus it is, that this community is assured an economic security rare in the industrial section of Eastern United States.

The founding of Ephrata constitutes one of the most interesting parts of the early history of Lancaster County as necessarily much of the historical background centers on John Conrad Beissel, a German religious refugee, who came to the Cocalico in 1732 and established here his monastic societies and built up a congregation of Seventh-day Baptists who, while inclined to follow his religious teachings, refused to accept celibacy and purchased farms in this vicinity.

As the famous Cloister grew in brethren and sisters. Ephrata became the mecca of the immigrating Mennonites and Dunkers. When dominated by the progressive Eckerlings, the brethren erected grist, paper, fulling and, saw mills along the Cocalico, employing male help who built homes nearby so as to be close to their places of employment. Thus, Old Ephrata, as it was known in those days, became a community that grew steadily as the years progressed.

The Germans who found peace of mind in this vicinity were a sturdy lot. They were accustomed to hard labor and were well grounded in the rudiments necessary to successful farming. They labored from sun-up to sun-down. Their wants were few. They became prosperous and reinvested their savings in the thing they loved most besides their families-farms.

The introduction of the cultivation of tobacco was the most vital circumstance connected with the history of this section. As one after another the farmers put out larger and larger acreages, so Ephrata became a growing center for the industry. Large warehouses were built for storing the leaf. Other factories were erected in which men and women were employed in the manufacture of cigars until the advent of the machine which more economically turned out the finished product.

To take up the slack in employment other industries filtered in until today there is here a well diversified number of plants which turn out shoes, knitwear, dresses, bricks, paper boxes, machine parts and many other necessities.

As the town grew in numbers, there sprung up a desire for a borough charter. In 1889 and 1890 the principal topic of conversation in barber shops, general stores and wherever the citizens gathered, was a borough form of government. So heated became the debates at times that words were passed that later were regretted.

The Incorporation of Ephrata [2]

An application for the incorporation of Ephrata into a borough was presented to Quarter Sessions Court, April 20th, 1891. The application was the outcome of the agitation of the two months prior. Of the 298 property holders of the town, 170 had signed the petition, but of course, as in all progressive movements, a counter petition was originated and circulated, and presented in opposition at Court, with 102 names attached, a number of whom were non-residents. Messrs. Brown and Hensel represented the petitioners, and Messrs. Steinmetz, Malone and Whitson were attorneys for the remonstrants.

During the ten years prior to this move the town had a rate of growth of about 300 per cent. The population at the time of incorporation was about 2200. A bank, four churches and various industries desired the advantages of municipal privileges; a police system was needed; better school facilities, graded streets and suitable pavements.

According to announcement a meeting was held in Mentzer's Hall on Saturday afternoon, February 14th, 1891, to define the boundaries of the new borough of Ephrata. There was a large attendance of property holders and great interest was manifested in the movement. The advantages of having borough regulations were presented and fully explained. The spirit of the meeting was good and the sentiment in favor of the advance movement was almost unanimous, but very few making exceptions to the step. Messrs. George Wise, John R. Messner, J. B. Kellar, J. J. Baer and J. B. Eshleman were appointed a committee to make a draft of the proposed lines. George A. Kemper, of Akron, was the surveyor, and the entire work was performed with promptness and little or no opposition from the property holders along the line surveyed, almost all being anxious to be included in the borough limits.

The petition for the incorporation of our town into a borough having gone through all the preliminary stages, the Court on Saturday afternoon, August 22nd, 1891, made a decree incorporating it into a borough, Judge Patterson issuing the decree.

An editorial from the Ephrata Review, August 28th, 1891, says: "At last the wish of our citizens has been granted and we are an incorporated borough. If we citizens perform our duties conscientiously and with a desire for realizing the best good to the greatest number, we will soon reap the advantages to be derived from incorporation. It is now necessary to elect to the several borough offices, men who will advance the interests of the town. If they are wise and prudent, our streets and sidewalks will soon be in better condition than at present, and at a cost but little advance of our past taxation for road purposes. An economical and wise borough council can soon put into operation plans whereby our streets can be lighted, our schools better regulated, and the town well supplied with water. These are questions of the greatest importance and must be met now and discussed and acted upon."

The first borough election was held at the public house of L. E. Royer in Ephrata, on Tuesday, September 15th, 1891, between the hours of 7 A.M. and 7 P.M. The following officers having been appointed by the Court officiated: Judge; H. C. Gemperling; Inspectors, John H. Spera and A. B. Urich; F. S. Klinger and W. K. Mohler were chosen as Clerks. This special election was to elect officers to serve until the regular election in February following. The total number of votes cast was 443, and was quite large in consideration that the registered voters numbered 536. No party tickets were settled by primary election or caucus, and the election was very quiet, there being no disorder of any kind, though there was considerable electioneering done. The candidates for councilmen were most numerous, as there were seventeen persons who aspired to an office for which six could be elected. The entire list of candidates numbered forty-eight. The successful candidates were as follows: Burgess, G. S. Wise; Council, J. B. Brugger, G. F. Groff, J. J. Baer, J. S. Spangler, Joseph Cooper and A. W. Mentzer; School Directors, C. B. Keller, J. M. Shaeffer, J. Frank Eckert, Samuel R. Hess, Levi S. Landes and Wm. Heilig; Judge of Elections, John A. Heyser; Inspectors, H. H. Stroble and B. F. Emmert; Assessor, Samuel R. Nagel; Assistant Assessors, Edwin Konigmacher and David Kraatz; Tax Collector, Levi B. Snader; Auditor, J. J. Yeager; Constable, H. W. Gier.

On Friday evening, September 18th, following the first borough election, the newly elected Borough Council held a preliminary meeting at the Eagle Hotel for the purpose of organization. S. L. Sharp, resident Justice of the Peace, was in attendance and administered the oath of office. Burgess George S. Wise presided. Hon. J. Hay Brown, Esq., of Lancaster, was elected Borough Solicitor, and promised to explain the duties of Council on Thursday evening, September 24th. S. L. Sharp, Esq., was elected Clerk. Much laborious and disagreeable work was necessarily well performed by the first set of Councilmen, and to them belong much credit for their bold stand in the new enterprise.

The town has enjoyed general prosperity and has made rapid strides of improvement since its organization. The Board of School Directors immediately set to work and built a fine eight-roomed school-house at a cost of over $15,000, and Prof. H. E. Gehman, with an able corps of teachers, was elected principal. He graduated the first class from the Ephrata High School in 1893-94. It consisted of five young men and three young ladies, all of whom were exceptionally bright. The most notable and marvelous change due to incorporation is the educational work, and too much can not be said for all the members of the School Board and the honest, conscientious work of Prof. Gehman and his corps of instructors, as we have officially been ranked at the head of schools in this county. Thus may it ever be, let results prove the system and no one will dare raise his voice against the most glorious of our free institutions.

The town of Ephrata is nicely laid out, though somewhat irregularly, and lies on the north and west of the Ephrata hills, and by the Lancaster papers is often called the "mountain town, " whilst writers in magazines and the daily press have termed it the "quaint and quiet village." Suffice it to say that Ephrata has nicely graded streets, fine pavements, elegant homes, good water, excellent schools, plenty of churches and societies, and is ever hospitable to all repeatable visitors. In fact, there is that warmth of greeting with our people, that all strangers are loath to leave us when once here. It has had a steady growth, such as can withstand the shocks of time and a financial crisis without much distress. We are therefore not of a mushroom growth, but staple, productive, intelligent, progressive, active, energetic, and awake to true citizenship, the highest aim of man after the saving of his soul. Much more might be said as to the general push of the citizens and the unconscious working together of the same forces. When a new venture is proposed, it is generally well discussed and made plain to all before it is adopted, hence the few downright failures in what ever Ephrata has undertook to do.