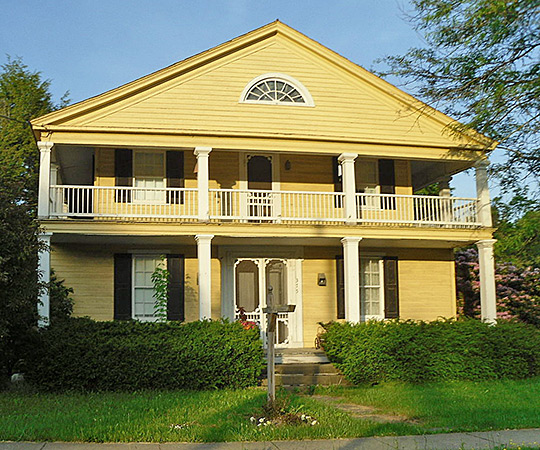 The Edward Saeger House (375 Main St.) was listed on the National Register of Historic Places in 1980. Portions of the content on this web page were adapted from a copy of the original nomination document. [1]

The Edward Saeger House is a frame structure with clapboard siding resting on a cut stone foundation. The two story home measures 34' x 34', is 3 bay x 4 bay and contains a full attic and basement. The windows are 6 over 6 lights and the gable roof has two interior chimneys. A lunette is encased on the pedimented gable end.

The most interesting feature of this house is the second story veranda which dominates the north, south and west elevations. Incorporated within the Greek Revival style of the house, the columns are of square Tuscan order. A balustrade lines the three sides of the veranda.

Only two major alterations to the structure have been made. The Victorian style front door is apparently an alteration and is of unknown date. An addition was put on the kitchen in approximately 1866.

The interior is plain and symmetrical and has not been changed significantly over the years. There is a central hallway on the first and second floors running from front to back. It is 5' wide and has two rooms on each side of both levels. A narrow staircase of two flights, connected by a landing, is situated at the rear of the hallway. The first floor rooms measure 14' x 15' with 9'2" ceilings. All rooms contain connecting doors as well as openings to the hall. The front two rooms have broad openings to the hall with wide hinged panels that may be closed (front left is missing). There are 8 original fireplaces still in working order placed back to back, with the front right first floor fireplace remodeled. The large fireplace in the kitchen has its original crane, a large brick hearth, and wooden shutters for closure. The width of the second floor rooms are 4 1/2' less than the first floor rooms due to the recessed upper veranda running the full length of the house on either side. The floors throughout the home are of 6" pine planking. A doorway was converted from a center window on the second level. The back door, on the first floor, was relocated when a new kitchen was added. The back left upstairs room was remodeled to provide modern bath facilities.

The architecture of the Edward Saeger House is of an unusual design for a rural borough such as Saegertown. It bears a relationship to the Baldwin-Reynolds House (listed on the National Register) in the City of Meadville in that it too has a second floor, southern style porch. The state of preservation for the Edward Saeger House can be marked as very good. The Edward Saeger House is a beautiful example of Greek Revival style. It has undergone very little remodeling over the past 130 years and still maintains its air of originality.

The settlement began at what is now known as Saegertown ca.1795, when the brothers, Arthur and Patrick McGill, came to Woodcock Township. After Major Roger Alden built a sawmill in Saegertown, approximately 1800, the settlement was known for several years as Aldens Mill. In 1824, Daniel Saeger bought Alden's mill and adjacent lands and at the age of 44, he laid out the town under its present name.

Edward Saeger, a native of Pennsylvania of German descent, left Egypt, Pennsylvania in 1823 to find a suitable place to settle. After he arrived in Saegertown, he attracted to the area a large number of German yeomanry from Lehigh and other eastern Pennsylvania counties.

Being active in the community, Saeger was an early member of the Lutheran Church, the owner of a sawmill and general store, and a justice of the peace. He was a member of the Pennsylvania State Legislature.

Edward Saeger, born to Daniel and Margaret (Snyder) Saeger in 1806, bought the property on Main Street in 1845 and soon after built the home which is the subject of this documentation. Edward was one of the directors of the Meadville, Klecknerville and Edinboro Plack Road Company from 1849 to 1851.