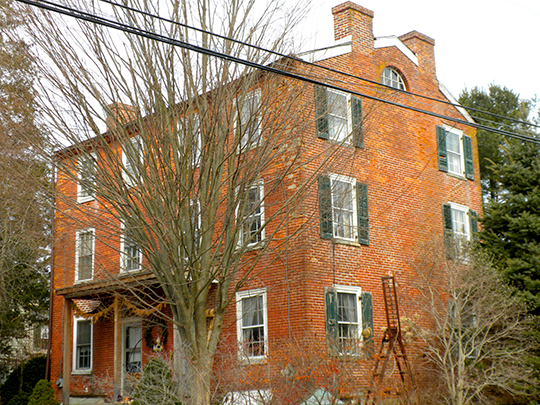 The Unionville Village Historic District [‡] was listed on the National Register of Historic Places in 1979.

In the gently rolling Southeastern corner of fertile Chester County, Pennsylvania, lies the small village of Unionville, a community that dates back to the middle of the 18th century.

Unionville Village today is a blend of mid to late 18th century dwellings, early to mid 19th century townhouses, plus many variations of the Victorian style of architecture. Though locally manufactured brick is the predominant mode of construction, fine examples of stone and frame buildings also exist. In addition, there are several barns and carriage houses that complement the early atmosphere that the village has been able to retain in the face of progress. Unionville today is a living example of a crossroads village which came to life in the 1750's, prospered in the 1800's as a self-sufficient community and was bypassed by progress in the 1900's as neighboring towns gained greater importance.

Unionville, or Jacksonville, as it was formerly known, was founded by John Jackson who built a log cabin at the northeast corner of Doe Run and Wollaston Roads. This building was superseded by a large brick house which Jackson built in 1751 on the southeastern corner of these crossroads. Jackson's home was later to become the Cross Key Inn where it provided food and lodging for travelers between the years 1808-1833. In 1834, it was replaced by the Union Hotel which Isaac Smith constructed directly across the street. The new inn also provided a drovers' barn to accommodate the horses and cattle which were brought to the village to be sold or traded. Located on the Doe Run-Wilmington, Delaware Road, Unionville provided an excellent stopping-off spot for travelers going from upstate Pennsylvania to this major Delaware city.

Between 1759 - 1900, Unionville Village played a vital role as the nucleus of a large thriving agricultural community. Farming families steadily looked to Unionville for the goods and services that could not be supplied on the farm. Some of those who provided special services were C. W. Lawler, a tinsmith, J. R. Pugh who built a tannery, and cabinetmaker and undertaker, James Chalfant who worked in town from 1825-1858. In addition there was a town blacksmith, a cobbler, a wheelwright, a doctor, and a local post office which was started in 1820. Besides this, Unionville also had a small library founded in the early 1800's as well as several churches and schools. Some of these early business structures remain today as reminders of the past and serve as homes for many of the citizens of the village.

Educational services were provided to the community by the Unionville Academy as early as 1834 while other private schools opened later during the 19th century. Religious needs were met primarily by the Unionville Presbyterian Church, formed in 1829, with the present structure built in 1844. Quakers also moved into the area during the 18th century and the present meeting house was constructed in 1845. Social life from the middle of the 19th century focused around Unionville Hall. Upon its construction in 1850, it became the community center for lectures, debates, dances, and musicals.

As railroads and major highways began to bypass Unionville during the latter part of the 19th century, the village lost its competitive position relative to other neighboring towns and, as a result, the small businesses of the self-sufficient village were unable to grow. As goods and services became less expensive in other areas, Unionville was slowly transformed from a self-sufficient commercial settlement into a residential village. From an architectural standpoint, Unionville contains over 67 significant structures in virtually the same settlement pattern of the 19th century village. Only 19 structures which date to the post 1910 have been built within the boundaries of the historic district. The combination of late 18th century structures, early and mid-19th century townhouses, and Victorian style residences provide an architectural panorama of the historical development of the settlement. That Unionville retains its original settlement pattern with a minimal number of intrusions is recognized by the residents and Unionville today is in the midst of restoration activities.