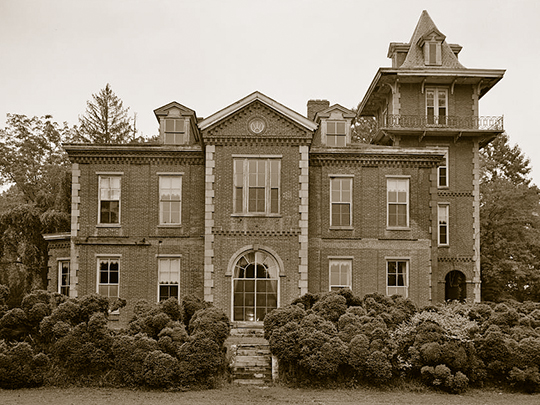 Cedarcroft is a residential neighborhood of approximately 85 of detached, single family homes built from the 1950s through the 1980s. Median age is circa 1966. Median interior living space is approximately 2,500 sqft. Lot sizes range from approximately three-quarters to more than three acres with a median of approximately one acre.

Access to Cedarcroft is from Unionville Road (Route 82) southbound onto Locust Lane or Taylor Lane. The development lies in the northwest quadrant formed by the intersection of Route 82 and Baltimore Pike (Route 1).

The neighborhood takes its name from the 1850 home of Bayard Taylor which the development surrounds. The home was listed on the National Register of Historic Places in 1971. Portions of the content on this web page were adapted from a copy of the original nomination document.

Cedarcroft is a large, two-and-a-half story house with a modified hipped roof. It is constructed of brick with stone quoins, a corbeled cornice, and a brick belt course. The most conspicuous feature of the house is a four and a half story tower, which projects from its east, or front, elevation. Surrounding its fourth floor the tower has an open balcony and an iron railing, and its curved pyramidal roof has a gabled dormer on each of its four sides. At the base of the tower, five round arches provide an entrance porch sheltering the door, which has side lights and a transom set under a long stone lintel. The front elevation has two bays on either side of the tower. Those to the north are wider, for this side of the house has a wing with a cross gable roof which begins behind the tower. These two bays have a small rectangular window between the main windows of the first floor, and a single gabled dormer above them.

A vivid and romantic personality, Bayard Taylor was popularly regarded by mid-nineteenth century America as a great writer. He was a type specimen of his age, a man of strong will who drove himself toward the success he desperately desired. Yet, as a poet, Taylor had a deeper side. His Home Pastorals, (1875) has been called "intrinsically as well as historically valuable.[1] His translation of Faust has achieved enduring appreciation and has been widely recognized as "a handsome contribution to American culture."[2] Although the bulk of his work is deservedly forgotten, Taylor is historically memorable both for what he represented and for what his contemporaries believed him to be.

"Cedarcroft," which Taylor built in 1850, was the scene of some of the author's fruitful labors and is a direct expression of both his character and the ethos which he represented. Its lavish design and scale reflect that blending of the romantic and materialistic impulses peculiar to his age. In its relatively unaltered condition, the house is a striking memorial to both Taylor and his epoch.

Bayard Taylor was born in 1825 in Kennett Square, a small Pennsylvania community. As a boy he began to rebel against his Quaker environment, and succeeded in attracting some notice as a poet. In 1844 he published a volume of verse, Ximena, and the same year went as a touring correspondent to Europe. Upon his return he published a record of his experiences, Views Afoot, (1846), which proved to be extremely popular. He now pursued the career of journalist, and in 1849 sailed to California to cover the gold rush for the New York Tribune. Returning to the east in 1850, he produced another successful travel book, Eldorado, and won more recognition as a poet. In the same year he was married to Mary Agnew, with whom he had long been in love. The match was a tragic one, however, for his wife was dying of tuberculosis and lived only until December.

Taylor now immersed himself in a series of worldwide journeys and wrote many volumes of travel literature which secured his place in the imagination of the American public. In 1847 he married for a second time, and the next year settled at "Cedarcroft," which he built near his native village. He found, however, that life at the estate tended to be dull and expensive, requiring him to engage in hack writing and more travel. During the Civil War, he served as a correspondent and then as a diplomat to Saint Petersburg, where he was for a time in charge of the American mission. After the war he turned to the writing of novels, more poetry, and a painstaking translation of Faust. In his later years, Taylor's poetry began for the first time to achieve a genuine depth.[3] He was the recipient of many honors, but was nevertheless in continual financial straits. Unable to sell "Cedarcroft," he left his parents in residence there and in 1874 moved to New York. In 1878, his difficulties seemed to have been ended by an appointment as minister to Germany, a country in which he had achieved a great reputation. His health was broken, however, and he died in Berlin in December of the same year.