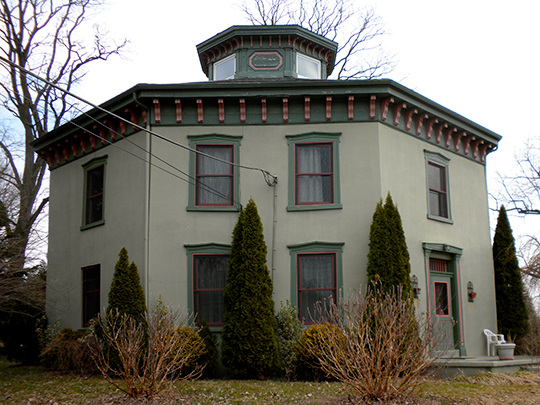 Ercildoun (pop. 80). Most of the Quakers of Ercildoun, a crossroads hamlet two miles southwest of Coatesville, trace their ancestry back to the founders of the Fallowfield Meeting House, which was first built here in 1794. The name of the village is as dear to them as to readers of Sir Walter Scott. James Fulton, Jr., who had married into one of their families, took the name from Scott's poem, "Thomas the Rhymer," and had his father-in-law, Gideon Pierce, who became the first postmaster on Feb. 12, 1850, hand the name over the village post office. At first the Post Office Department spelled the name Ercildown, but changed it to Ercildoun on April 14, 1854, when Mrs. Mary Ann Fulton was appointed postmaster. Some of the town's early buildings were destroyed by a tornado in 1877.

The Ercildoun Historic District was placed on the National Register of Historic Places in 1985. Portions of the text, below, were selected and adapted from a copy of the original nomination document.

The village of Ercildoun, located at a prominent crossroads in East Fallowfield Township, was settled at the end of the eighteenth century and had its greatest period of development in the third historic period of East Fallowfield, 1811-1865. Ercildoun's most important historical significance is in the area of social/humanitarianism because of its level of involvement with the abolitionist movement This movement was active on two levels: a political protest and participation in the underground railroad. It had political overtones, both in its methods, that is in lobbying for anti-slavery legislation, and in its attempt to form a political party. In addition to political protests some of Ercildoun's abolitionists became totally committed to the cause by their involvement in the underground railroad.

Ercildoun Historic District is one of ten hamlets in the township. It is one of five crossroad developments located on a feeder route to the Strasburg Road. Like most of East Fallowfield, its principle economy was agrarian beginning with the Fulton and Welch families.

Early in the nineteenth century both families subdivided portions of their farms to create the nucleus of a hamlet. The architectural significance of Ercildoun, like the rest of East Fallowfield Township is vernacular and local in context. Of the ten communities in the township it contains the best collection of vernacular interpretations. The residences lining the streets of this hamlet are simple in design and retain a high degree of integrity with few intrusions.

Both its location and its Quaker affiliation is the reason why the abolitionist movement flourished in the hamlet of Ercildoun rather than in any other section of East Fallowfield. The village located approximately fifteen miles from the Maryland border was the closest station to the Mason-Dixon line intersected by both the northern and southern escape routes of the Underground Railroad.

Most of the problems on a national scope such as, mob violence, persecution, and the development of a unified front were also present at Ercildoun. The village, therefore, was a microcosm of the national situation. Abolitionists were generally considered radicals and detested by their neighbors in a rural conservative setting. In Ercildoun, however, they were tolerated because the village was a strong Quaker community.

Physically the hamlet grew up around the Fallowfield Meetinghouse. The original Quaker structure was built on site in 1796 (no longer exists); the present building was erected in 1801. The Meetinghouse is significant not only because it is the physical center of the village but because Quaker attitudes and views continued to dominate the development of the village.

The original Quaker settlers were James Fulton who purchased property in 1806 and was taxed for a "small stone house" by 1808. The George Welch House was built between 1796 and 1798. This is well documented since George Welch was taxed for a log house in 1796 and a "new stone house" in 1798. The Thomas Welch House was erected circa 1803. These three houses, therefore, are significant in the settlement of the village.

The Quakers permitted the use of the Meetinghouse as a school but eventually other educational institutions appeared in the area. The Ercildoun Academy was built in 1851 as a private school for boys but later became better known as an academy for girls. The expanding population prompted local leaders to construct the Ercildoun School in 1899 as a replacement for an older school building. Ercildoun was also the home for two Chester County Superintendents of Schools, Mr. George Moore and Mr. Joseph S. Walton.

To fill the needs of the growing village, Gideon Pierce built a store in 1818 which still serves the Ercildoun community as Webster's Store. For a few years a competitive store existed across the street in the Joshua Lee House. At different times, these establishments served as the Ercildoun post office. The name "Ercildoun" was first used when Gideon Pierce opened the post office in his store in 1850. His son-in-law, James Fulton Jr. who had long sought a post-office for the village, took the name from a poem, "Thomas the Rhymer" by Sir Walter Scott. The Post-Office Department at first misspelled the name as Ercildown but corrected the mistake by 1854.

Very few commercial enterprises flourished in Ercildoun and only one industry, the Lee, Pierce and Thompson Foundry. In 1854 Caleb Pierce and his partners introduced a new farm mowing machine called "The Allen Machine." These foundry buildings have been readapted as residences.

What sets Ercildoun apart from hundreds of similar hamlets is the range of its association with the anti-slavery movement in the period before the Civil War. Historically, Quakers have been associated with anti-slavery sentiments. By the 1760's Quakers were disowned for possessing slaves and as early as 1781 Quakers accepted blacks as members of their meetings. In the nineteenth century, however, the Quakers split into two factions; the conservative group who felt it sufficient to cleanse the practice from its own membership, and the more radical group who demanded a more active political protest. The conservatives were not pro-slavery but opposed the language and tactics of the abolitionists. In Ercildoun, James Fulton Jr. (son of James Fulton) was the leader of this radical group. He was also a spokesman for both the county and state anti-slavery organizations and attended national meetings.

The East Fallowfield Anti-Slavery Society, composed of Quakers, met often in the Fallowfield Meetinghouse. In the winter of 1844, the meeting was broken up by a mob of ruffians. A majority of the Meeting membership voted to ban the Anti-Slavery group from its meetinghouse. An association led by James Fulton Jr., Nathan Walton, Mary Coates and Lukens Pierce as trustees of a larger group (all abolitionists) then purchased land and built next to the Meetinghouse, a hall which they called the Free Hall and later People's Hall. After the Civil War this building served the Ercildoun community as a grange, church, library, and town hall for every sort of social gathering. The Fallowfield Historical Society presently meets there.

The original purpose of the People's Hall, however, was clearly to give the abolitionists a place to meet undisturbed. Perhaps the burning of the Philadelphia abolitionist hall, Pennsylvania Hall, and the destruction of the buildings associated with the Coleraine Anti-Slavery Society in Lancaster County in 1842, as well as the riot in the Fallowfield Meetinghouse the previous year persuaded the group to identify the building as something other than another abolitionist hall.

In their literature, however, the black population of Ercildoun does refer to the People's Hall as the abolitionist's hall. In 1974 Isabella Stokes, the daughter of an ex-slave Samuel Ruth, reflecting on the People's Hall in an article written for Black history Week writes — 'One old building still stands, As a tribute to voices now stilled, It stands as a monument to Old "Friends" Who dared to do right.'

In addition to petitioning legislators, publishing pamphlets, and lecturing, some of the Ercildoun abolitionists were involved in the most radical of all anti-slavery activities – the Underground railroad. In Charles Blockson's, The Underground Railroad of Pennsylvania, James Fulton Jr., Gideon Pierce and the Walton family are identified as operators in the Underground Railroad in Pennsylvania. A map from The Trackless Trail shows the importance of Ercildoun as a station. It served both the northern and southern routes of escape. The largest number of passengers accommodated in Ercildoun numbered 33 in one group. The Nathan Evans Journal tells of another episode concerning twenty-five men women and children who were sheltered at Ercildoun.

Considering its reputation it is not surprising that Ercildoun was regarded as a place of refuge by blacks both before and after the Civil War. Three brothers, Jacob, Joseph and Richard Carter, escaped from their master in Virginia and made their way north eventually arriving in Ercildoun. Jacob remained in the village and built a home. Jacob Carter along with Samuel Ruth, an ex-slave who arrived in Ercildoun after the Civil War, were the initial elders of a black congregation that erected the Christ Disciple Church in 1894. This group first held services in the woods around the village and later in People's Hall.

Today the village of Ercildoun looks much as it did prior to the Civil War. The abolitionists now lie peacefully in the cemetery of the Fallowfield Meeting. What changes have been made are due as much to nature as the hand of man. In July 1877, Ercildoun experienced a tornado so violent that the "Ercildoun Tornado" became the subject of a lecture at the French Academy of sciences in 1878. The limited number of historical intrusions in the district helps maintain Ercildoun's historic presence. The village has lost neither its architectural integrity nor its historical significance.