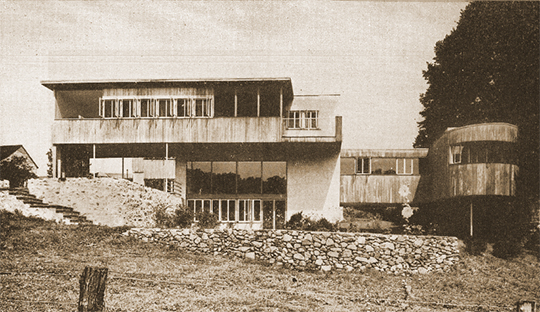 Avon Lea (the Oskar Stonorov House and Farm), was listed on the National Register of Historic Places in 1975. Portions of the content on this web page were adapted from a copy of the original nomination document [‡].

The Oskar Stonorov House was built in 1938 using the stone walls of an existing stone and frame farmhouse as the core of its structure and composition. The frame portions and all interior structure of the old house were removed, and the stone walls were reshaped as dictated by the design of the new house, the peaks at the gable ends being leveled, and openings added or closed. The only other remaining portion of the old farmhouse is the wood flooring, which was removed and reused in sections of the main and upper levels.

The "L" shape of the old stone house was retained as the basic shape of the main portion of the new building. The composition of the house is formed by a limited number of elements. New exterior walls are frame clad with vertical cypress siding. The openings are large panes of fixed glass set in wood sash, and steel casement ventilating units grouped in bands in composition with the large panes. The roofs are flat with parapet edge or thin profile overhangs.

The main entrance is at the corner of the middle level. In the early 1950s a guest house was added beyond the studio. In the late 1950s most of the open balcony area and the overhand extended on the northeast and southeast sides. A shallow open balcony remains, outside the sliding glass doors of the added enclosure. The studio is curved and is connected by a bridge to the main house. There are white stucco portions which are the existing walls of the old farmhouse. The north corner driveway approach shows the house as it was originally built, no structural alterations have been made on this side. The entrance door is sheltered by a flat corrugated metal canopy, and the curved masonry at the corner houses the furnace flue. In general, the stucco portions are the stone walls of the original farmhouse.

The guest house, added in the early 1950s, is a flat-roofed wood and glass box suspended above a terrace on two masonry piers and a pipe column. It is reached by and open bridge from the studio or by an outside stair from the terrace below. The siding is the unfinished cypress as on the main house.

When Oskar Stonorov arrived in the United States from Germany in 1929, he was one of a small number of European architects bringing to this country the influence of the Bauhaus and the International Style. This philosophy and style would later have a profound effect on American architecture, reinforced and carried forward by other great talents that followed, prior to World War II.

Stonorov brought with him a varied background of education and experience in art and architecture, and by 1931, at age 26, he had achieved recognition through successes in two important international competitions which he entered while working in New York. Immediately thereafter, he moved to Philadelphia and established his own office in partnership with Alfred Kastner. He maintained his practice there until his death in 1970, working individually and in a series of partnerships, including an association with Lou Kahn during the war years, and for the last fifteen years in partnership with J. Frank Haws.

Stonorov had a keen sense of the relationship between political and architectural activity in developing the urban environment, and many of his most significant achievements were a result of his combining his abilities in these areas. He was instrumental in bringing about the participation of government in housing and designed, with Alfred Kastner, the first Federally funded housing, Carl Mackley Houses in Philadelphia. Involvement in the design of low and moderate income housing continued throughout his career.

With Edmund N. Bacon he designed the city planning exhibition "Philadelphia Panorama" in 1947, one of the first and perhaps most significant of his efforts to cultivate public understanding of an involvement in the urban planning process.

His career was centered in public architecture, with artistic and functional endeavor closely interwoven with efforts to achieve social improvements.

A man of boundless energy, Stonorov's extensive public involvement did not prevent him from doing many private projects, and it was in 1938, just after his marriage, that he turned his attention to design of his own residence. The raw material was a Pennsylvania farmhouse on a portion of his father-in-law's farm, a house grown rambling through a series of additions over the years, and occupying an unusually pleasant site on the side of a valley overlooking a meadow and the Pickering Creek.

Utilizing most of the stone walls but little else, Stonorov transformed the farm house into a totally contemporary architectural statement, taking full advantage of its site, but maintaining the elements of its indigenous rural character which he valued.

The house is, first, a strong personal design statement by one of the earliest and most significant International Style architects to make a home and a career in this country. In it is reflected the instinct for family living patterns which Stonorov brought to all types of residential projects during his career.

From this house and another nearby renovation evolved an approach to the renovation of an addition to the native Pennsylvania farmhouse which he continued and developed through a number of succeeding projects. It involved the creation of spacious living areas in a contemporary addition, designed with no apologies in style to the existing structure, while leaving intact all or part of the old house, and relating the two by scale and materials rather than stylistic detail.

This is, further, a less obvious but more profound significance to Stonorov's "contemporary farmhouse" and the farm over which it presides. Reflected there is an attempt to resolve some of the disparate and sometimes paradoxical elements of his social and environmental philosophy.

Stonorov described himself, in architectural simile, as "... Le Corbusier by intellect, Frank Lloyd Wright by instinct." Both a cosmopolitan urbanist and a lover of the rural environment, he was concerned about man's relationship to nature in a modern urban/suburban society. "Children in Wayne think milk comes from cans," he would quip. As he developed his urban planning philosophy he strove to resolve the high densities which he felt necessary to maintain the character and advantage of urban development with the need to maintain man's touch with the fundamentals of nature through exposure to agricultural processes.

His farm represented his effort to establish this balance in his own life. Although his wide-ranging activities kept him "on the go" professionally and socially, he maintained an active interest in the dairy farming, husbandry and crop raising at his farm, finding time to add his own manpower to harvesting and other farm operations.

The farm today is less active agriculturally, and the resolution of urbanism and nature remains an unsolved puzzle for future planners, but Stonorov's house stands as a striking example of a twentieth-century country house, and as a harbinger of this century's most influential architectural movement.