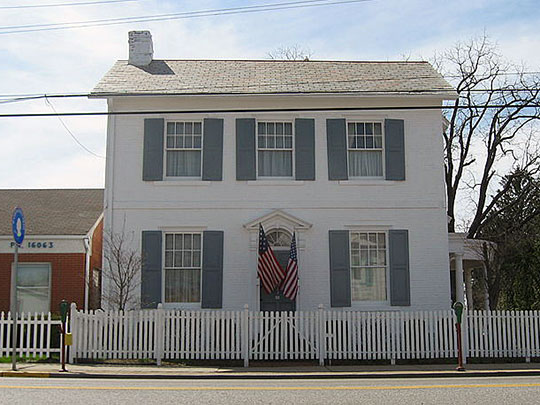 The Passavant House (243 South Main Street) was listed on the National Register of Historic Places in 1977. Portions of the content on this web page were adapted from a copy of the original nomination document.

The Passavant House was built in 1809 as a wedding present for Zelie Basse Passavant. The house is a rather simple 2 1/2 story brick building on a sandstone foundation. The house is three bays wide and two deep. The main facade has a centrally located doorway whose elegance and grace is highlighted by the austerity of the rest of the house. The recessed doorway is flanked by two reeded pilasters supporting a full pediment. The panelling on the door, and entrance way, the sunburst transom is reminiscent of the doorways of Georgian Philadelphia.

The windows have simple stone sills and lintels. Those on the front have panelled shutters. (Early drawings of the house show shutters of a batten construction). A brick string course runs across the main facade providing the only exterior decoration. Small square windows are located in the attic level of the gables.

The interior of the house has most of its original wood work including flooring, panelling and fireplace mantles.

The "Baron" Frederick William Detmar Basse suffered severe financial losses in Germany during the early Napoleonic wars. In 1802 in an attempt to recoup his fortunes he purchased 10,000 acres of Depreciation Lands in what is now Butler County. By 1808 he had sold a large tract of his land to the Harmony Society, and developed farming and mercantile interest throughout the area. He laid out a town which he named after his favorite daughter Zelie. He persuaded Zelie and her new husband Philippe Passavant to immigrate and in 1809 constructed the subject house as a gift for them.

The Passavant House is the oldest house in Zelienople and is well preserved. Its fine "Philadelphia" doorway is particularly noteworthy.

Mention should also be made of Dr. William A. Passavant, Zelie's son. Dr. Passavant was widely known for his work in establishing educational and eleemosynary institutions. He founded the Passavant Hospital in Chicago and Pittsburgh, the Lutheran School of Theology in Chicago, the Lutheran Children's Home in Zelienople, Thiel College and many others.