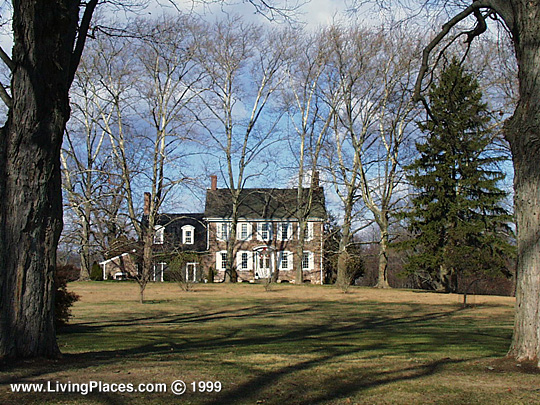 The Yardleys are supposed to have come into England with William the Conqueror, but the name is not met with until 1215, when William Yardley appears as a witness at the signing of Magna Charta. From that date all trace of the name is lost until 1400, and after that, the trace is complete. The first immigrant of the name to come to America was William Yardley, of Lansclough, Staffordshire, who, with wife Jane, sons Enoch, William and Thomas, and servant Andrew Heath, arrived at the Falls, Bucks county, September 28, 1682. He located 500 acres on the west bank of the Delaware covering the site of Yardley, Lower Makefield Township. The homestead was called "Prospect Farm," a name it still retains. The warrant was dated October 6, 1682, and the patent January 23, 1687. William Yardley, born, 1632, and a minister among Friends at twenty-five, was several times imprisoned. From the first he took a prominent part in the affairs of the infant colony. He signed the Great Charter, represented Bucks County in the first Assembly, and was a member of the Executive Council. He was an uncle of Phineas Pemberton, one of Penn's most trusted friends and counselors, but in the midst of his usefulness, William Yardley wrote to him, about the time of his death: "He was a man of sound mind and good understanding." William Yardley and his family being dead, his property in America reverted to his heirs in England, his brother Thomas and nephews, Thomas and Samuel, sons of Thomas. In 1694, Thomas, the younger son, came over with power of attorney to settle the estate. "Prospect Farm" became his property by purchase, and he settled in Lower Makefield, spending his life here. [1]