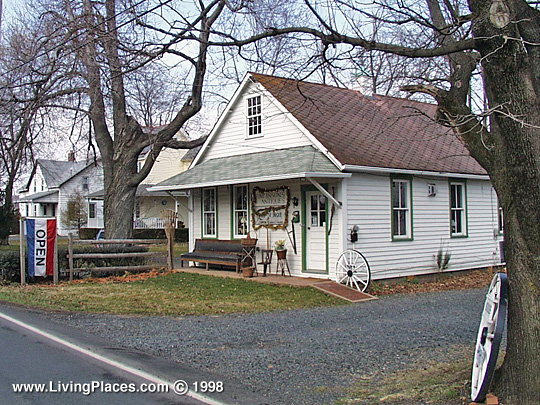 A portion of the content on this web page was adapted from a copy of the original National Register nomination document prepared circa 1982.

Forest Grove is significant as a preserved 19th century rural village, founded at the convergence of two old roads. It grew because it was a convenient location for houses to cluster. It is an example of a village that grew that way. Nine such villages grew in rural, central Bucks County, but Forest Grove has been preserved because its economy did not flourish in the 20th century. Social life centered around a Presbyterian church and a lodge building built by the International Order of Odd Fellows, both of which are still standing.

Early in the 19th century, the town was called Forrestville. In 1877, at the time the post office was established, the name was changed because there was another Forrestville in the state. In "Place Names in Bucks County," George MacReynolds suggests that the name is derived from a heavily timbered grove which once surrounded the town. As early as 1701, land grants were being broken up into working farms in this region. Lower Mountain Road, from the bridge over the Neshaminy Creek at Bridge Valley, as well as Forest Grove Road, appear on a 1774 map of Bucks County. Lower Mountain Road traversed the broad agricultural plains of Buckingham and Solebury Townships south of Buckingham Mountain to the crossing of the Neshaminy Creek at York Road, abut one and a half miles from Forest Grove. Although large farms were settled in this area by 1740, two smaller farm sites oriented close to Lower Mountain Road were established around this time on the East and West corners of the present intersection. Forest Grove Road ran from Lower Mountain Road near Patrick Malone's house to the John Lacey grist mill at Wycombe village. The proximity of these two farmsteads to this intersection encouraged additional buildings, several residences appearing along Lower Mountain Road in the early 1800's. The 1830's through 1850's saw Forest Grove take shape along both roads, with the William Kirk store on the corner and the Odd Fellows Hall and church as meeting places. Two smaller farms were established in the 1870's on the edges of the village. Only a few homes have been built since then.

Since little has been written about Forest Grove, lifelong residents were interviewed. They described what it was like in the late 1800's and early 1900's. It was a community of families who farmed comparatively large tracts of land, producing corn, other grains, fruits, vegetables, chickens, eggs and dairy products. Included in the district are portions of working farms.

Social and religious life of the community centered around the Presbyterian Church. According to "The church in the Grove, 75 Years of the Forrestville Presbyterian Church" by the Rev. Jesse Penney Martin, as early as 1846 some church services were held at Odd Fellows Hall. To build a church a meeting was held in 1853 at the home of Joshua T. Bewley and money subscribed to purchase 2 acres from William Kirk. By November 21, 1853, the simple, plastered-over stone building and its furnishings were dedicated. The walls and ceiling were frescoed. In 1940 they were painted over. The building is now a lovely pointed stone structure with added belfry and Greek Revival style porch.

The Odd Fellows filled a pressing need before the days of insurance and social legislation. George MacReynolds says that as the approximate date the hall was last used by the Odd Fellows was 1870. The lodge hall was used for many affairs, political rallies, lectures and community parties. In 1852 a "daguerrian artist" offered his services daily at the hall and in 1853 an itinerant photographer, advertised to "preserve your phiz" there. The hall stands unaltered today.

Sometime after 1847 William M. Kirk started to operate a general store on the north corner of Forest Grove and Lower Mountain roads. Here he sold foods, clothing, tools, farm implements, etc. The post office was also located in his store. 1850-1900 saw the greatest commercial activity. Forest Grove supported a blacksmith and a wheelwright. The "1871 Hershey Business Directory & Gazetteer of Bucks County" records about 20 houses, a store, blacksmith and wheelwright shops and an Odd Fellows Hall. The "1894 Scott's Bucks County Directory" lists a blacksmith, a butcher and a dealer in agricultural tools. In the 1905 Directory Isaac W. Ryan, who had been Bucks County Commissioner in 1881-1884, is listed as a lumber dealer. He also owned a sawmill in Bridge Valley. The "1914 Bucks County Directory lists one shoemaker. At present the only business is an antique store, formerly Fryling's Hall, which was built in the 1920's for social activities.