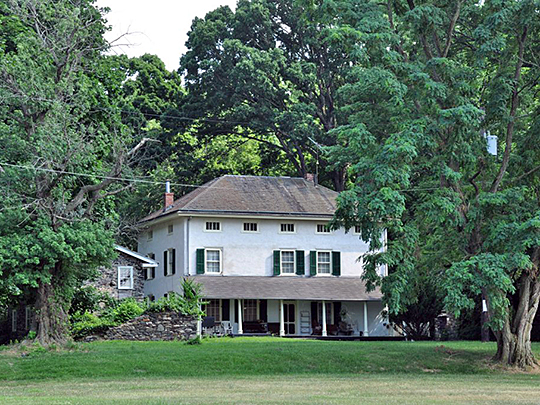 Trevose Manor (aka the General James Wilkinson House and/or the Joseph Growden House; (5408 Old Trevose Rd.) was entered onto the National Register of Historic Places in 1976. Portions of the content on this web page were adapted from a copy of the original nomination document. [‡]

Trevose Manor is purported to have been built between 1681 and 1685. An early account (1698) describes the manor as being "noble and fine ... pleasantly situated," but leaves no detailed description. In Davis' History of Bucks County, however there is a description of an engraving apparently made in 1687. The engraving "represents a large two-story house, with attic, divided by a hall through the middle, portico at the front door, pointed stone, pitched roof, and nine windows and a door in front. At either end was a wing that contained dining room, kitchen, servant's quarters, offices, etc. The lawn in front appears to have been an unbroken forest. A small fire-proof office to the right contained the public records of the county for many years. The walls of the main building remain, but it has been greatly changed by its present owner (1876) ... (Davis, History of Bucks County, p. 143.) If this description is accurate, it would seem that the only entirely original portions of the present house are its stone walls. Notwithstanding the description, It also appears as if the house may have been built in two sections: the seam between the second and third bays is evidence.

In 1847 the house underwent the addition of a third story, and the original pointed stone was covered with stucco. Also around this time, interior furnishings such as wainscoting, corner cupboards, and banisters were removed. At the time of sale 1847 the house was reported to be "a 'leetle' the worse for wear" and to "want repairing." At the turn of the century, the stone annex to the main house was in "considerable disrepair;" the connection between the two sections had ceased to exist.

Trevose Manor is at present a hip-roofed structure, five bays across the main facade. It is two and one-half stories high, with eyebrow windows on the top level. Each window is a double hung sash, with six-over-six panes. Paneled and louvered shutters flank first and second story windows, respectively. A raised string course divides the first two stories. The original center hall plan, with three rooms on each side, remains. The manor house itself is currently occupied. The stone wings are in ruins, and one has trees growing through its roof. The estate is now surrounded by suburban developments.

The significance of Trevose Manor is most important in its associations with historically prominent people, particularly with figures outstanding in both the Revolutionary and Loyalist movements.

The original owner of the property, Joseph Growden, was a judge and a close associate of William Penn. He helped formulate and signed the Charter of Privileges. It is therefore probable that Penn was a guest at Trevose. Joseph Growden also served as Attorney General in 1725. Growden's son Lawrence became Chief Justice of Pennsylvania and also held the office of Speaker of the Assembly. Lawrence Growden's daughter, Grace, married one Joseph Galloway and the couple spent a considerable proportion of their time at Trevose. During the 1770's Joseph Galloway became one of the most prominent political figures in the colony, as Speaker of the Assembly. His close association with Benjamin Franklin resulted in numerous visits of Franklin to Trevose. Galloway believed that the conflict between Britain and the colonies would be settled non-violently, and advanced a "Plan of Union" implementing these ideas. The plan was, however, rejected by the Continental Congress and Galloway eventually became a Loyalist, serving with the British army and emigrating to England at the war's end. Galloway's country seat suffered from the usual indignities served on the Tories; it was ransacked and partially burned by the Continental Army. Galloway's former tenant at Trevose, Richard Gibbs, followed a contrary course and became an active participant in the Revolutionary cause, and also became sheriff of Bucks County. Thus the history of Trevose Manor reveals some of the ambiguous character of the American Revolution and the decisions which that conflict forced.

In 1782-83, Trevose, which had been seized by the Revolutionary army, was occupied by General James Wilkinson, a very active if notorious figure In several wars. As a young officer, Wilkinson several times conducted himself irresponsibly during the Revolution at such crucial battles as Saratoga. After the Revolution he traveled west to fight Indians and to court the favor of Spain in private dealings. Wilkinson was for a brief period governor of the Louisiana Territory. His later duties and travels took him to Detroit, Montreal, Mexico, and Texas. Accusations of conspiracy and fraud usually accompanied him.

The architectural significance of Trevose is also worth mention. Despite its later alterations, the manor as it originally stood was one of the more imposing in Bucks County. Its center hall plan and courtyard are English in conception, reflecting the immediate origins of its founder.