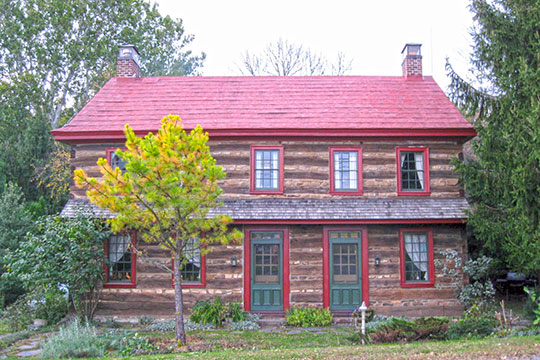 The Trexler Historic District (375-424 Old Philadelphia Pike) was listed on the National Register of Historic Places in 2001. Portions of the content of this web page, were adapted from a copy of the original nomination document.

The Trexler Historic District is locally significant as a collection of buildings that illustrate the materials, design, and workmanship of northern Berks County homes and businesses built from the colonial period until the Great Depression. The period of significance begins in 1790 with the erection of Ritter House, a two-story log house that served as a stagecoach stop at this ford across the Ontelaunee Creek. During the nineteenth century, the auxiliary buildings built on this property became the commercial center for the neighboring farmers who traveled by horse and wagon to purchase dry goods at the general store and process their crops at the butcher shop, cider press, and creamery that operated here. In 1874, the introduction of the railroad generated an economic boom that facilitated the building of three new homes and a general store. These resources illustrate the vernacular adaptations of Late Victorian architectural design still popular at that time in this rural section of Pennsylvania. By the end of the period of significance in 1930, most of the commercial activity in Trexler Historic District had ceased due to changes in transportation and commerce. The remaining resources appear much as they did in 1930.

The Ritter family was one of the first European families to settle in Albany Township. Their 1733 land grant from the Penn brothers included 301 acres along the Ontelaunee Creek. After 1750, a road was built roughly parallel to the Pine Creek to the northwest and crossing the Ontelaunee Creek at Ritter's farm This road, now known as the Old Philly Pike, forded the Ontelaunee Creek behind the Ritter house, and resulted in the use of the house as a stagecoach stop. The Old Philly Pike continued to be a busy route for travelers, and in 1841 a new stone bridge was constructed over the Ontelaunee to replace the ford. An early mill established along the Creek, combined with the stagecoach stop, made the farmstead a local center of commerce in the area.

By 1857, Joel Kistler owned the Ritter farm and opened a tannery adjacent to the mill. While the mill used the Ontelaunee Creek for power, the tannery used the creek water to clean and process hides. Both businesses were important to the local economy. The village of Trexler was founded in 1863, when Nathan Trexler purchased the Henry Kerper and Company Tannery and moved its operation to this site along the Ontelaunee. The 1876 township map indicates that Nathan Trexler owned the tannery and much of the surrounding area. Nathan and his younger brother Amos were partners in the tannery and mill for the next thirty years until the tannery closed in 1892. No remnant of these buildings is evident in the floodplain. Nathan lived in the log house and operated a general store in one of the front rooms. Amos and his family lived in the small frame house.

The village economy boomed in 1874, when the Lehigh and Schuylkill branch of the Reading Railroad was established. Amos Trexler, who was running a business selling coal, grain, lime, feed, sand, and other agricultural and building supplies to local farmers, helped bring the railroad to Trexler. Through his efforts, the local farmers helped fund the continuation of the railroad construction through Albany Township. Amos Trexler realized the importance of this new transportation system on his business. Previously, the goods he sold were brought to Trexler by wagon. Now, they could be shipped much faster by rail car. A depot was constructed in front of the Pennsylvania barn. The depot did not have an attendant and was primarily used for freight and mail, although local passengers did use the depot including many who worked at the rail yards in the City of Reading. This depot was destroyed in 1917, when a new grain and potato storage facility was built. The 1876 map of Albany Township shows many more businesses including a hotel (presumably the inn operating out of the log house), the railroad depot, the J.D. Trexler store and post office, and the mill/tannery complex.

Between 1874 and 1930, the Trexler family businesses prospered. Amos Trexler built a new 2-1/2 story frame house on the opposite side of the road in 1886. Nathan Trexler built a new home on the north side of the railroad for his family and another for tenants. By 1890, the brothers had erected the General Store building. Nathan and Amos operated the Washington Inn in the log house. Agriculture was becoming more specialized, and in 1917 Amos decided to build a new warehouse facility to store grain and potatoes grown by local farmers before shipment. The first floor of the building as devoted to potatoes, and the second floor held different types of grain in bins. Potatoes were a big cash crop for local farmers (including the Trexlers who still owned the fields south of the village). The combined stations in Albany Township loaded as many as thirteen railroad cars of potatoes to cities across the east coast of the United States. The village of Kempton, one mile to the south, began in 1874 when the railroad company built a hotel to house rail workers. A smith shop, modern feed mill and a shirt factory later employed many families who lived within walking distance of the Kempton station.

The construction of new and improved roads -- including State Route 143 to the west of the district -- in the late 1920s and early 1930s contributed to the decreased use of the Old Philly Pike. At the same time, large trucks using the new roads could pick up loads of potatoes and other products directly from the farmers. The growth of the trucking industry made the storage facility in Trexler increasingly unnecessary. In 1929, Albert Trexler began a new business in the family warehouse. Albert made space on the first floor to adapt manual potato seed cutters to electric. The changes he designed resulted in more efficient machines that cut more uniform pieces and that worked smoothly in mechanized planters. His first year in business he sold 250 machines to farmers across the northeastern United States. But with the bank collapse in the next year, the Trexler family lost some of their real estate holdings due to mortgage foreclosures.

Soon, Alebrt Trexler's was the only business left in Trexler. The tannery's buildings, which had ceased operation in 1892, were demolished ca. 1920. Some of the lumber was used to build the addition onto the small frame house. The cider mill went out of use at the turn of the twentieth century. The blacksmith and carpenter whose shops were outside the district closed their operation during the Depression. The Trexler General Store could not compete with the businesses in Kempton. When the Trexler brothers declined to initiate the new rural delivery system in the late 1930s, the post office was transferred from Trexler Store to Kempton and the Trexler General Store closed their doors permanently. The L & S railroad line was disbanded in the late 1950s and this section of the track began being used as the tourist W K & S line in 1962. A signal shed and flashing lights were added to Trexler's streetscape by the W.K. & S. enterprise at that time. From 1930 the Ritter house was used for storage until converted back to a single-family residence in the 1970s. The properties Albert Trexler was able to buy in 1930, remain in the family today, owned by his two daughters. At the turn of the twenty-first century, Trexler is a strictly residential community, with no active business in the village.

During the period of significance, from 1790 to 1930, the Trexler Historic District was an important commercial center in Albany Township. Commerce in colonial times was generally conducted along the few existing roads at sites where water was available to power mills. The introduction of railroads generated commercial centers around the depots collecting surplus produce for shipment to markets far beyond the reach of horse and wagon. When trucks and cars became the dominant form of transport, the location of commercial centers shifted to prime highways. The Trexler Historic District began as a colonial-era stagecoach stop, expanded to include water-powered farm accessory businesses, and experienced a building boom when the railroad came through in 1874. However, improvements to the state highway system by-passed Trexler at the same time the economic impact of the Great Depression closed most of the village businesses. The National Register Virginville Historic District seven miles to the south has a similar history as a early trading center along the creek that experienced considerable growth when the railroad came through in the 1870s and then declined after the railroad was replaced by highways.

The Trexler Historic District exhibits the materials and design elements preferred locally across the period of significance in both residential and commercial buildings. The Trexler Bridge is listed in the National Register as an example of mid-nineteenth century bridge design. The Ritter House is an unusually large, two-story, log building that maintains many original exterior and interior features. The Berk Log House, two miles south, is listed in the National Register, and exhibits similar corner notching techniques but is a much smaller building. The Trexler General Store is an excellent example of a community store with intact decorative elements remaining inside and out. Equally as significant are the Late Victorian style homes that demonstrate the popularity of these design elements long after they fell out of favor elsewhere. As a collection the resources in the district are enhanced by their setting and undisturbed layout along the railroad. In Berks County, the Oley Township Historic District contains villages with a similar mix of colonial log buildings surrounded by vernacular Victorian-styled houses, but Trexler is a much smaller, cohesive village.

The Trexler Historic District exhibits original materials, layout, setting and scale that convey the architectural history of a small commercial center from 1790 to 1930. The progression from single farmstead to busy commercial village is evident in the resources present in the district. The few non-contributing buildings are not visible from the road. The roadside alignment is typical of rural villages in Berks County. Trexler Historic District has an unusual collection of historic resources that continue to communicate the 200-year history of village commerce.