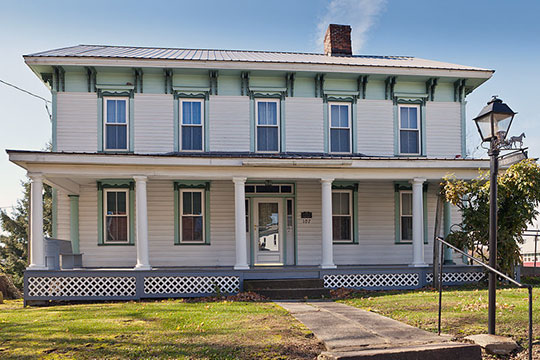 The origin of the name of this municipality is this: On a certain evening, probably in 1849, when there were only about three buildings on the territory which it now covers, there was a small assemblage of persons then residing here and in this vicinity, at the store of Guyer & Laughlin. One topic of conversation on that occasion was the name which should be given to this point, then a mere hamlet, which, it was expected, would in time become a town. The main object was to select a name which had not been given to any other place, or at least to any post office, in this State. Some one present, it is not remembered who, suggested Dayton, which name, it is thought, occurred to the suggestor by reason of some mental association of his with Dayton, Ohio, which was named after Jonathan Dayton, one of the agents who effected a purchase for John Cleve Symmes of 248,000 acres from the United States, on a part of which is the site of that city. Dayton was a citizen of New Jersey, and was speaker of the house of representatives in the Congress of the United States from Dec. 7, 1795, until March 3, 1799.

The borough was incorporated in 1873, with G. W. Lias as the first burgess. H. L. Spencer and George Kline were the councilmen; W. W. Caldwell and Wesley Pontius, school directors: Thomas P. Ormond and J. R. Cornick, overseers of the poor; J. T. Smith, assessor; A. J. Thompson, auditor; John Campbell, justice of the peace, and G. B. Roof, constable.