Photo: Home in the Hunterstown Historic District, State Route 394, Straban Township, PA. The Historic District was listed on the National Register of Historic Places in 1979. Photographed by User:Smallbones (own work), 2011, [cc-by-1.0 (creativecommons.org/publicdomain/zero/1.0/deed.en)], via Wikimedia Commons, accessed May, 2016. 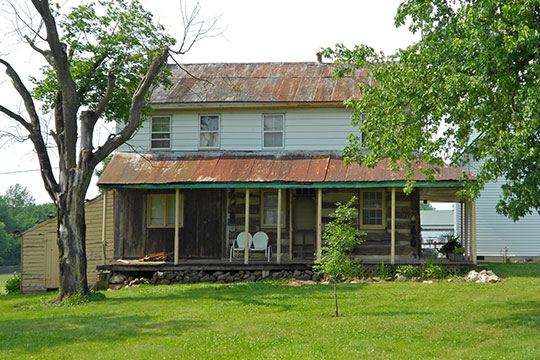 The Hunterstown Historic District was listed on the National Register of Historic Places in 1979. Portions of the content on this web page were adapted from a copy of the original nomination document. [1]

The Hunterstown Historic District encompasses most of the small town of Hunterstown which is located in Straban Township, Adams County along Beaver Dam Creek on Rt. 394 and Granite Station Road. In this town of 53 main structures, 49 lie within the original perimeters of the town. Originally platted by the town's founder, David Hunter, in 1749 or 1750, the town was known as Woodstock. It has also been known as Straban Center and was renamed Hunterstown in 1800. Many of the buildings present today are present on the 1858 and 1872 maps but most have been altered.

The town of Hunterstown is located 6 miles north east of Gettysburg in Adams County, Pennsylvania. When Adams County was still part of York County this area was divided into large farm holdings. The area covered by the town today was once the holding of Hans Morrison who owned and ran a tavern on the road from East Berlin to Gettysburg. On March 14, 1764 David Hunter patented 180 acres from Hans Morrison and plotted the village of Woodstock. First lot sales were to William Galbreath on April 2, 1764. (York County Deed Book, B485, Deed 44.) A lot also sold to Samuel Dickson, Jr. Some of the original street names were King Street, Hamilton Street, Green Street and Rose Alley.

In 1792 the Hans Morrison land was sold by sheriff sale to William Scott who renamed the town Hunterstown in 1800.

The village's military history is almost contemporary with its founding. It began with a review of area soldiers from the Hunterstown area raised in preparation for the French and Indian War. In this conflict David Hunter served as captain of the Hunterstown militia under General Forbes in the expedition against Fort Duquesne.

By the end of the eighteenth century Hunterstown was the center of a rich countryside of farms and rivaling communities. When Adams County was formed from York County in 1800, Hunterstown was the center of new county's population. Chosen as one of the two possible sites for the county seat, Hunterstown was championed by the Shrivers, Dickens and Brinkerhoffs. But the farm land of James Getty was chosen instead due to its central geographical location and donation by Getty of lands for use for courthouse and other public buildings.

Hunterstown continued to grow despite this set back. In 1820, John Studebaker opened a forge four miles northeast of Hunterstown. Later this industrialist moved to South Bend, Indiana were he opened the Studebaker Wagon Manufacturing Company which was later converted to the Studebaker Automobile Company.

An early post village, Hunterstown as a self sustaining village developed rapidly with its possible high point just prior to the Civil War. The town at this time supported two churches, an educational academy, two chair factories, three stores, a tavern-hotel, a doctor's office, a blacksmith shop, a tailor shop, shoemaker shop and a wagon shop. The population of Hunterstown in 1820 was 103.

During the Civil War Hunterstown was not only the scene of a skirmish, but also, as in previous wars, responsible for enlisting men. A National Guard of 45 was organized at Hunterstown on February 12, 1859, and several persons from the area joined the Pennsylvania Volunteer Infantry. One of the town's most distinguished citizens was Dr. Charles Edward Goldsborough who interrupted his practice in 1860 to join the United States Army at Frederick, Maryland. As a medical officer Goldsborough established hospitals at Ball's Bluff and at Frederick after the Battle of Antietam. He was twice captured by Lee's army and once wounded before returning to Hunterstown.

The Confederate invasion of Pennsylvania in 1863 which ended with the Battle of Gettysburg posed as much a threat to Hunterstown residents during those summer months as to Gettysburg residents. By mid-June Confederate probing raiders had reached the outskirts of Harrisburg, but were recalled south by General Lee who feared advancing Union troops. Chambersburg and then Cashtown were cited for the projected holocaust and in response Confederate divisions made their retreat in a southwestwardly direction. One such division under Maj. General Jubal A. Early reached Hunterstown July 1 on its route west. However, Early's travel was cut short by news of fighting at Gettysburg. A skirmish ensued at Hunterstown on July 2 when corps of the Potomac Army met the Confederates there.

The Great Conewago Church was used as a hospital following this skirmish. Most of the building present in Hunterstown at the time of the Civil War are still present. Unfortunately much has been altered through additions, siding and new roofing. Very little new building has taken place since the late 1800's.

Hunterstown, though somewhat altered, is a fine example of an early post village which saw its highest success during the 1820's to 50's.

Rupp, Daniel I. The History and Topography of Adams County. Lancaster: Gilbert Hills, 1848.