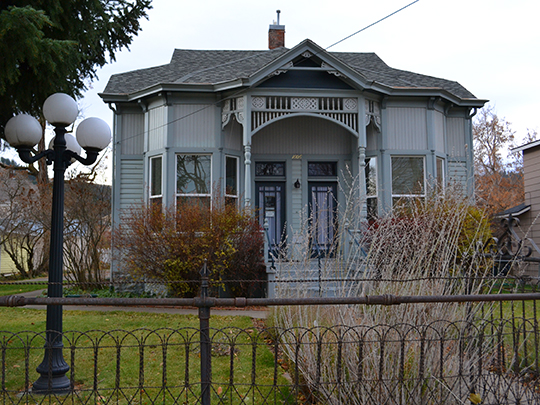 La Grande, seat of Union County, lies at the foot of the Blue Mountains near the western edge of the Grande Ronde Valley. Eastward rise the Wallowas, a low wall against the sky, serrated by bristling growths of fir and spruce. The town spreads out across a gently rising slope on the south bank of the Grande Ronde River, its wide streets pleasantly shaded by long rows of deciduous trees. Modern brick and concrete structures lend a metropolitan touch to the little city.

Ignoring the beauty and productivity of its level acres for a quarter of a century, settlers passed through the valley toward the Willamette River and it was not until 1861 that a few settlers retraced their trail to stake the first claims in this region. They spent the winter about 5 miles north of the present city and in the following Spring, Ben Brown moved with his family to the south bank of the Grande Ronde River where he built a log house at the foot of the mountains beside the overland trail. He converted his house into a tavern around which arose a small settlement known variously as Brown Town and Brownsville. Upon the establishment of a post office in 1863, the name changed to La Grande, in recognition of the beauty of the scenery.

The town was incorporated in 1864 and in the same year the legislature created Union County, designating La Grande as temporary county seat. The erection of a two-story frame courthouse started a county seat fight that lasted 20 years. No vote was taken until 1874 when the Town of Union won the contest. Then the citizens of Union descended on La Grande, forcibly appropriated the county records, and carted them home. Ten years later another vote reversed the first and La Grande citizens invaded Union and took back the records.

The city was once home of Blue Mountain University, a Methodist College that ceased to function in 1884. During the Indian uprising of 1878, the alarmed populace took refuge behind the thick brick walls of the old university building. The Indians did not enter the valley, but fear did not fully abate until General O. O. Howard routed the tribes, killed Buffalo Horn, and drove Egan, the Paiute chieftain, from the State.

The Oregon Railway and Navigation line came in 1884, following a tangent across the prairie from the gap at Orodell, 2 miles to the north, to Pyle Canyon. La Grande, finding itself a mile off the railway, created a "New Town" beside the tracks, through "Old Town," as it is still known locally, remains an integral part of the city. The coming of the railroad opened a wider market for the products of the region and the location of division shops in the city insured a large and permanent payroll. Thereafter the population steadily increased.

The industrial life of La Grande centers about the railroad shops and the 2 large saw mills. Creameries, cold storage and packing plants, and flouring mills provide additional employment. The principal products of the surrounding country are fruit, livestock and lumber. La Grande is the chief shipping and distributing point for Union and Wallow counties and the starting point for hunting, fishing and sight-seeing trips into the Wallowa and Blue Mountains.