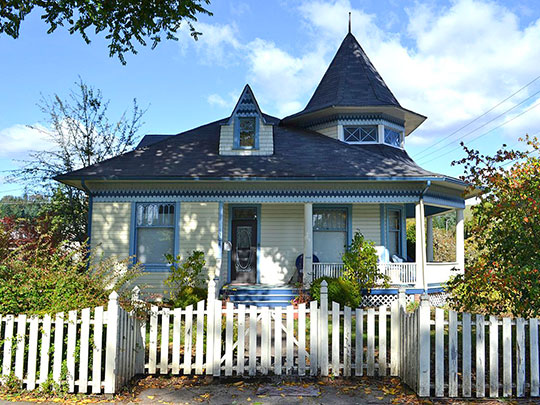 James Chapin reached the area about 1847 by travelling north along the trail from Scottsburg on the Umpqua River. Chapin settled just south of the present City, near what would become the area called Latham. Mr. Chapin may have been the first settler in the area.

John Cochran arrived about 1849, and settled a claim. A portion of his land is now the northeast section of the City. In 1851, the William Shields family arrived and staked a claim adjoining Cochran's land to the south. The Shields Claim is now included within the City Limits. Legend has it that the Shields property was the original Cochran claim, and that he was so anxious to acquire neighbors that he forsook his original claim to the Shields' and claimed the land immediately to the north, convincing them to stay. Returning to the Cottage Grove area in 1853, after an initial visit in 1850 and a return trip to Missouri, John and James McFarland took claims to the west of Cochran and settled on the west side of the River. Henry Small took the land south of the McFarlands at about the same time. These Donation Land Claims contain the vast majority of the land that has since become the City of Cottage Grove.

The Hazelton train of five wagons arrived in 1851. The Hazeltons claimed land to the west of the present City Limits, and established a small sawmill on Silk Creek in 1857. Several settlers arrived in the area in 1853 as members of the Knox/Oglesby wagon train, which ended up in the Cottage Grove area after following the Oregon Trail from Kentucky via Missouri. By the time of their arrival, unclaimed land was becoming scarce. The Knoxes settled to the north and east of the Coast Fork and Row Rivers, and the Oglesby claim was along the Row a few miles into the Valley to the east. Both families were influential in the history and development of Cottage Grove and its surrounding area. Numerous other settlers arrived in the following years, and many purchased land from early landowners. The excellent soils made smaller sized farms a profitable venture. Henry Small sold his claim to Jeremiah Yarnall and O. P. Adams in 1859 and moved to California. These two then proceeded to sell off smaller portions of the claim. Their willingness to sell parts of this property essentially determined the area within which the small village began to develop. Part of his claim became the first plat of Cottage Grove in 1869, and 17 smaller lots for development were thus made available to the more entrepreneurial members of the area. The town would remain on the west side of the River for about three decades, and development was originally dictated by the available lots of the original plat now known as Hazelton's Addition.

The early creation of parcels from homestead claims in the area was an important factor in development of the town. Combined with the early agriculturally oriented activity, the small farms created a development pattern akin to a rural village with dispersed homes spread upon the surrounding local landscape. The relatively high number of people still living beyond the city limits in the area serves as a reminder of this initial settlement pattern.

The original small village with no known name grew up along the banks of the Coast Fork of the Willamette, along the Territorial Road near the confluence of Silk Creek. The first commercial/industrial structure may have been Harvey Hazelton's first saw mill near the confluence of Silk Creek and the Coast Fork, but he soon moved the mill further upstream to the west. The first plat of the town was filed in 1869 by Harvey Hazelton. The seventeen lots carved from the Henry Small Donation Land Claim in the area south of the present West Main Street and west of the Coast Fork River became a local center of commerce. A livery stable, blacksmith shop, saloon and general store, plus several other small businesses were established by the 1860s, and some small sawmills were in operation a few miles west and south of the site. Large slabs from the Hazelton mill, a few miles west up Silk Creek, were laid along the street to aid in muddy winter passage. The small village thereby earned itself the dubious name of "Slabtown."

The South Lane County post office was moved to town from the north about 1867. The small settlement received its present name of Cottage Grove from this same post office, which had originally been located in Greenbury Pearce's cottage in a grove of oak trees just east of the present town of Creswell, about eleven miles north. Arrival of the post office, combined with a location along the Territorial Road, was instrumental in making this small village of "Slabtown" into the leading regional center for South Lane County.

The first Cottage Grove Hotel was constructed about 1869. The 1870 Census lists, in addition to the hotel, a blacksmith, merchant and a saloon. In 1871, a grist mill, wooden dam and mill race were installed between Silk Creek and the River in Hazelton's plat. The mill was a successful and efficient operation, and served the ever growing number of settlers scattered about the surrounding lowlands and foothills on the increasingly subdivided Donation Claims lands. A Masonic Lodge was organized in 1871, and a Hall was built just south of the mill merchants, including a millinery shop, and a restaurant reportedly owned and run by a black man, had also been established.

A wooden bridge across the Coast Fork River had also been built by this time. The bridge was apparently located just north of Silk Creek at the old ford, near the present western terminus of Adams Avenue (called Bridge Street until about 1912). The bridge was a key east-west link between a primitive road leading west up Silk Creek (Siuslaw Road, now named Willamette Court and West Main) and over the Coast Range foothills to the Lorane Valley and beyond into the Coast Range and Siuslaw River drainage, and the east side trails up the Row River and Mosby Creek Valleys into the Calapooya and Cascade Mountains.

During these early decades, the entire town has located along the west bank of the River, strung along the River Road. The west bank was chosen as the sight for early development not only because of the old trail, but for the same reason that the trail itself followed the west bank: It was much less susceptible to the ravages of flooding, which at this time was a fairly common annual event. Lands on the east side of the River were part of the Coast Fork flood plain. These prime fertile soils were productively developed into open fields of wheat and other cash crops, with a few dispersed orchards, houses and barns scattered about the fields. In and around the growing village, striking differences in land use and activity characterized the intensive agricultural east side from the commercial and wood processing west side of the river during the early decades of development.