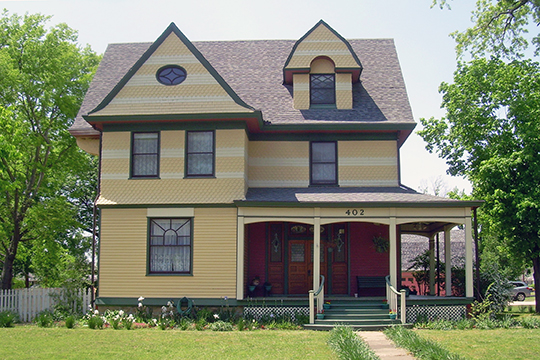 Wagoner, serving an agricultural area, was established when the Arkansas Valley and Kansas Railroad built to a junction here with the Missouri-Kansas-Texas line in 1886. It is said that the town was named for a popular train dispatcher, Henry "Bigfoot" Wagoner, of Parsons, Kansas.

Inside the Wagoner Carnegie Library is a museum where relics of the Civil War and many Indian articles are on display. At the American National Bank is exhibited a copy of a Cranmer Bible. A reprint of the famous edition issued in 1539-1540 under authority of Henry VIII. This copy carries the date 1585 and the name of Christopher Baker, printer for Queen Elizabeth. It contains an almanac computing the special feast days and seasons for a period of fifty years (1580-1631). The first entry in the family records chronicles a birth in 1751 at "Port Glasgow, North Britain."