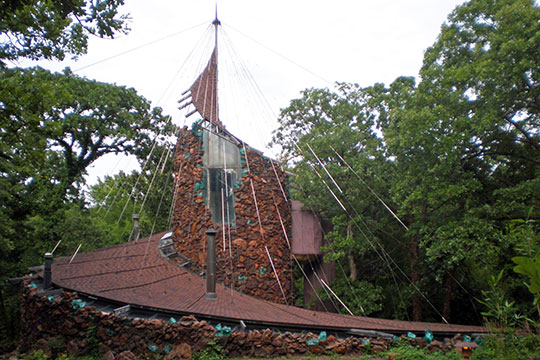 Similar to many towns in central Oklahoma, Norman's origins date primarily back to 1889 and the first Oklahoma Land Run. However, Norman has a brief pre-1889 history as a stop along the branch line extended through central Oklahoma by the Atchison, Topeka and Santa Fe Railway beginning in 1884. The railroad station, and subsequently the city, was named for a government engineer who had camped in the vicinity of the present site of the town in 1872.[1] Although there were only a few railroad buildings on the site of Norman Station, one of the lasting impacts of the original railroad occupation of the site was the town's Original Town site plat. Railroad officials took upon themselves the duty of preparing a town site plat which reflected their interests. As such, unlike many Oklahoma towns, Norman's town site does not follow the traditional grid pattern espoused by the federal government. Instead, Norman's town site was laid out in relation to the points of the railroad rather then a compass. Later development of Norman followed the traditional grid pattern, creating a noticeable jog between the original town site and subsequent additions.

On 21 April 1889, the site that would become the town of Norman was open prairie except for the handful of railroad buildings. By nightfall, 22 April 1889, Norman had mushroomed to a town of five hundred citizens and numerous temporary shelters. The Santa Fe Railway turned over its plat to the first town site company that arrived. Rather than remarking the lots of the new town, the town site company embraced the railroad's development plans with construction quickly underway.

Although Congress provided regulations for the land run, they failed to authorize a territorial government for the Unassigned Lands. Over a year after the land run, Congress finally passed the Oklahoma Organic Act on 2 May 1890. This act organized the government of Oklahoma Territory, in addition to other important matters. Under the act, the first seven counties of the future state of Oklahoma were created. Cleveland County was one of these first seven counties created in Oklahoma Territory.[2] Norman was quickly designated the county seat of Cleveland County.

Norman experienced a relatively stable population growth through the first half of the twentieth century. By the time Oklahoma was officially granted statehood in 1907, Norman's population stood at 3,040. Three years later, the town's population stood at 3,724, a gain of nearly seven hundred residents. In 1920, Norman claimed just over five thousand residents. The 1920s proved to be a major decade of growth for Norman. City population nearly doubled from 5,004 in 1920 to 9,603 in 1930. Gaining slightly less than 2000 residents in the ensuing decade, by 1940 Norman's population stood at 11,429. The 1940s also brought an explosion in the number of Norman residents so that by 1949, city population reached 20,180. It must be remembered, however, that these numbers did not accurately reflect the number of people actually living within the city due to the number of college students residing in the town on a temporary basis. [3]

Two major state institutions greatly influenced the maturation of the city throughout this time period, continuing to the present. The "most important factor in the growth" of the town was the location of the University of Oklahoma in the city. The University opened its doors in September 1892 in a building on Main Street. By 1948, over eleven hundred students attended the school which included nearly one hundred buildings on a main campus of nearly three hundred acres on the southwest side of Norman. The second state institution which affected the development of the town was Central State Hospital. Opened in 1915 in a previously privately owned mental institution, Central State Hospital became the state's largest mental treatment center by the late 1940s. In addition to operating its own farm and dairy, the hospital also ran canning plants, a laundry, mattress factory and furniture factory. In all by 1949, the hospital was valued at over four million dollars with 111 buildings spread over an area of 120 acres.[4]