Photo: Aaron Ferry House, ca. 1866, 5058 Sunnybrook Road, Kent, OH. Also known as the Winan Snyder House, it is a nearly-exact replica of Andrew Jackson Downing's Design III that appeared in The Architecture of Country Houses. Listed on the National Register of Historic Places in 1974. Photographed by User:Nyttend (own work), 2009, [cc0-by-1.0 (creativecommons.org/publicdomain/zero/1.0/deed.en], via Wikimedia Commons, accessed August, 2013. 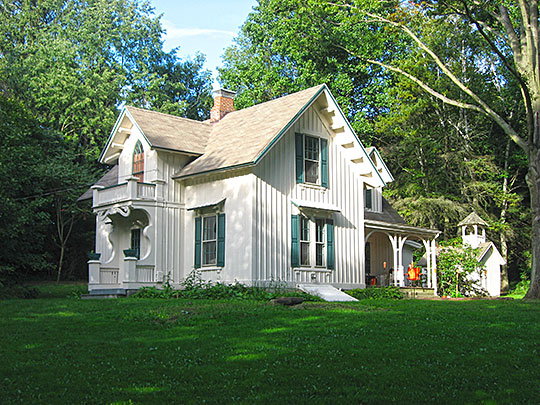 The first settler along the Cuyahoga River at the site that would become the City of Kent was John Haymaker. He arrived with his family in 1805 and built a dam and grist mill. It wasn't very long until the village of Franklin Mills began to take shape along the river's edge. Within a quarter of a century population had grown to 1,400.

Kent's modern business district grew around the development of the Pennsylvania and Ohio Canal. But it was the railroad era that launched Franklin Mills forward as a prosperous commercial center. The Atlantic and Great Western Railroad was operational here by 1863. The village name was changed to Kent in 1864 for Marvin Kent who was influential in bringing the railroad to town. In 1867 Kent was incorporated as a village with a population of more than 2,000 residents.

The Davey Tree Company, established in the late 19th century, planted hundreds of trees throughout Kent resulting in the city adopting the nickname, Tree City.

The city is arguably best known as the location of Ohio's Kent State University.

Kent is a small manufacturing city near the outskirts of Akron. Kent State University, a university since 1935, has a wooded campus of 100 acres and most of its buildings are in a semicircle on the crest of a slope. The institution was established as a State normal school in 1910 and has graduated more than 7,000 teachers. One of the five State-supported institutions of higher learning in Ohio, it offers degrees in business administration, education, arts and science, and has an enrollment of 1,800 students yearly. The present building program, launched while Martin L. Davey, a native of Kent, was governor of Ohio, will result in a completely modern educational plant.