Photo: Houses on the northern side of Orchard Lane just east of the Blue Ash Road intersection in Deer Park, Ohio. Photographed by User:Nyttend (own work), 2015, [cc0-by-1.0 (creativecommons.org/publicdomain/zero/1.0/deed.en], via Wikimedia Commons, accessed December, 2015. 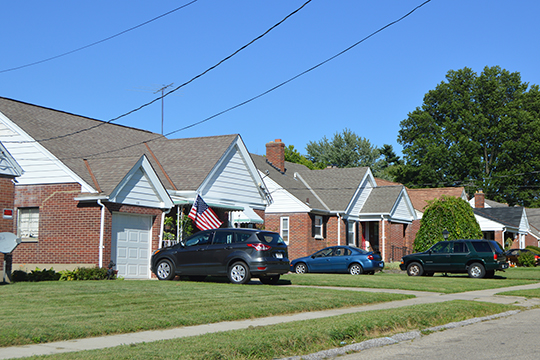 The city's founders gathered in the back room of what is now the Deer Park Inn on Blue Ash Road. Built in 1886 as Helds Tavern, it was just the second building in what would eventually become Deer Park, said owner Hermann Tegenkamp.

"They used to say if you could hit a ball from the field across the street into the front door, you'd get a free drink," he said. A grocery now stands on the site of that baseball diamond.

Deer Park was laid out in 1886 as a suburb of residences. Still mostly rural, Deer Park was incorporated as a village in 1912. There were 327 residents.

Most of the meetings of the leaders pushing to incorporate the area as a village were held in the back room of Helds Tavern. So when Deer Park was formed, council meetings were held in that same room. At the end of meetings, official minutes say, "council adjourned to the bar."

Deer Park developed slowly at first. It was 24 years before village leaders built a municipal building, leaving tavern-room meetings a thing of the past. But with suburban growth exploding with the baby boom, the city grew. By 1950 there were 7,247 residents. Deer Park was incorporated as a city in 1952.

During the 50's, 60's and 70's the City was typical Americana with silver maple canopy tree lined streets. The neighborhood streets were always full of kids. The park was always a short walk away, where there once was a small swimming pool often called the "toe wash." The park was the place to be if you were a kid. The park was always the center of the community's activities like the 12th Night Christmas tree burning or the summer ice cream socials, the Playground Mothers kept the park looking nice with flowers and such.