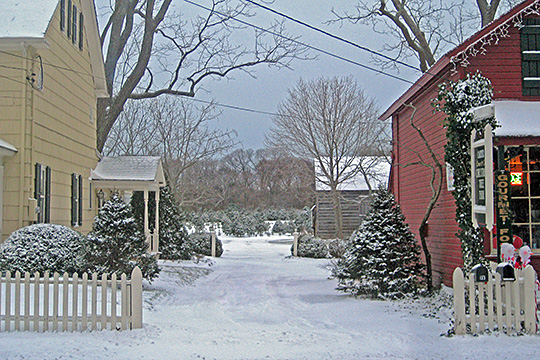 The Miller Place Historic District was listed on the National Register of Historic Places in 1976. [‡] Portions of the content on this web page were adapted from a copy of the original nomination document.

Located on the north shore of Long Island just east of Mount Sinai Harbor, the hamlet of Miller Place stands upon an elevated plain in close proximity to Long Island Sound. The hamlet consists of residential structures and their dependencies located along North Country Road. The Miller Place Historic District encompasses the heart of this hamlet and extends approximately seven-tenths of a mile along North Country Road from slightly west of the intersection with Miller Landing Road to a point about 1000 feet south of the intersection with Rocky Point Road. Modern residential development north of the segment of North Country Road precludes extension of the district northward to include any of the former fields or paths between the hamlet and Long Island Sound. Natural vegetation, however, visually shields the hamlet from this development. South of the old road open fields, woodlots, low growth, and the pond at the bend in the road all contribute to evoke a sense of the agrarian context in which the hamlet developed. Portions of this open space are encompassed within the boundaries of the Miller Place Historic District to preserve an historic agrarian setting. Despite the relative proximity of development, the visual environment of Miller Place remains essentially rural.

All of the structures within the Miller Place Historic District are situated relatively close to the road. Ranging from one to two and one-half stories in height, the twenty-seven principal buildings and their dependencies are built of wood frame sheathed in clapboard or shingles. Of these twenty-seven structures, five were built either in whole or part prior to 1800, while eighteen others date from before 1850. The majority of these principal structures were erected as dwellings and are still used as such. The Miller Place Historic District encompasses a concentration of the rural vernacular architecture characteristic of Long Island from the mid-eighteenth through the late nineteenth centuries. The structures are consistently homogeneous in scale and integrity, and the Miller Place Historic District constitutes a coherent architectural and geographical entity largely uncompromised by modern intrusions. Such modern structures as are found in Miller Place are for the most part concentrated at the two extreme ends of the hamlet: at the west end are located a food market/liquor store, a small one-story apartment building, and a modern one-story brick office building; while at the east end of North Country Road is located the Miller Place School complex (1938). Several other modern intrusions are also located within the Miller Place Historic District along North Country Road, though these do not seriously detract from the integrity of the district.

Reverend Ezra King House (ca.1840): The outstanding example of Greek Revival architecture in the Miller Place Historic District is this large frame and clapboard dwelling with attached wings. With its porticos extending across front and rear elevations, its fine dentil cornices, and its imposing proportions, this home was the showplace of this farming community during the latter half of the nineteenth century.

Horace Hudson House (ca.1830): This two and one-half story gabled shingle and frame dwelling with center chimney is a late but excellent example of the "half-house" common to much of Long Island after the Revolutionary War. This three-bay by two-bay home retains its original floors, fireplaces, and interior details. An earlier example of this vernacular style is the Daniel Hawkins House built in 1800.

Nathaniel Brown House (ca.1845): Five bays in length and two and one-half stories high, this rectangular frame dwelling typifies the rural vernacular architecture of its epoch. Its steeply-pitched cross gable and veranda extending the width of the street elevation are features common to many farm dwellings of the period.

William Miller House: The west portion of this shingle on frame house was built about 1720, with later additions c.1750 and 1816. The building is three rooms long, and one and one-half stories in height at the front with a lean-to at the rear. This structure boasts an exceptional Georgian pedimented front entryway with a transom of four astragal-ended lights. The William Miller House is a noted example of Long Island vernacular domestic architecture of the eighteenth century, and has been altered but little.[1]

Dependencies: Numerous outbuildings including barns, carriage houses, milk houses, summer kitchens, and privies are to be found behind some dwellings in the Miller Place Historic District. Modern garages have also been built behind some homes in recent years.

From the time of its settlement in the middle seventeenth century until recent times the hamlet of Miller Place has remained a rural agricultural community. Located in the Town of Brookhaven on Long Island's north shore, this early farming community contains an important concentration of domestic structures reflecting the development of Long Island vernacular architecture from the mid-eighteenth to the mid-nineteenth century. Extending along North Country Road for a distance of seven-tenths of a mile, Miller Place Historic District encompasses twenty-seven principal historic structures and numerous dependencies and conveys the sense of a rural Long Island community prior to the advent of modern suburban development. The Miller Place Historic District is significant for its visual homogeneity, for the relative absence of intrusions, and for the continuing traditional use of its dwellings, in many cases by descendents of the early inhabitants of Miller Place.

The first English settlement in the area of Brookhaven Town was at Setauket in 1655. Soon thereafter the first dwelling at the future site of Miller Place was erected by Captain John Scott (ca.1630-1696), who purchased land directly from the area's Indian inhabitants. One of the area's earliest settlers was Andrew Miller, a cooper who emigrated from East Hampton to build his house near the north shore about 1679, giving his name to the hamlet which subsequently developed around his homestead.[2]

Lured by the ample water for livestock afforded by the pond and springs at the bend in North Country Road, the Davis, Woodhull, Brown, Helme, and Randall families settled "Miller's Place" during the eighteenth century. Numerous descendents of these settlers continue to reside in family homesteads built before 1850. The dwellings erected by these early inhabitants are situated along both sides of North Country Road. Miller Place represents a rather unusual American example of the medieval town plan, in which pastures, croplands, and woodlots extend behind the street of dwellings into outlying areas.

The farms of Miller Place became large and self-sufficient during the eighteenth century, producing livestock, grains, and orchard crops. Farm produce was shipped to the New York market in coasting vessels sailing from Mount Sinai Harbor.

The community of Miller Place was frequently disrupted during the Revolutionary War. Several inhabitants (notably Richard Miller III) were prominent Loyalists who repeatedly clashed with their neighbors, the majority of whom embraced the patriot cause. There was much raiding of homes by both sides, and subsequent bitter feelings disrupted families.[3]

Miller Place experienced its greatest surge of prosperity following the War of 1812. The vast majority of the surviving structures of Miller Place were erected during the first half of the nineteenth century. By 1839, the hamlet was "a quiet and handsome village, containing about twenty-five dwellings any one hundred and thirty inhabitants."[4] The houses built during this period represent the vernacular architecture characteristic of a rural Long Island village in such forms as the "half-house" of two and one-half stories (in both gable and gambrel-roofed versions), and in adaptations of Federal and Greek Revival styles. By 1874, Miller Place was: "a compact settlement of thirty-five houses,...and is withal one of the most beautiful villages along the north side. Its residences, farm houses, and cottages have a uniform appearance of neatness and unostentatious beauty. ...It has a small store and post-office. An academy was erected in 1834 which has enjoyed an average degree of prosperity."[5]

Late in the nineteenth century, Miller Place became a major source of cordwood fuel to supply the heating needs of a growing New York City. Hardwood cut in the vicinity of Miller Place was transported by water from Miller Landing on Long Island Sound to New York.[6] Miller Place also became a summer retreat for many of these same city dwellers around the turn of the century, at which time numerous summer cottages were built.

The soaring real estate values of recent years have led to a decline in farming as suburban development continues to encroach upon Long Island's north shore. Because the historic houses of Miller Place were built relatively close to one another, and because many remain in the possession of descendents from early families, the Miller Place Historic District continues to survive as a rare vestige of Long Island's rapidly vanishing past.