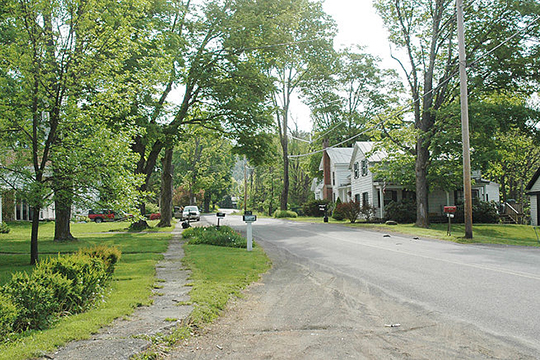 The Breakabeen Historic District was listed on the National Register of Historic Places in 1974. Portions of the content on this web page were adapted from a copy of the original nomination document. [1]

Breakabeen settlers were attracted early to the rich alluvial soils of the valley flatlands, while the precipitous hillsides awaited settlement until well after the Revolution.

The houses of Breakabeen are clustered along the side of Keyser's Kill on a gentle hillside next to the fertile flatlands. The stream cascades through a gorge and forms a natural boundary to the south. The atlas of 1866 shows about forty structures. Since that time some have been lost, such as the mills, and a few added. Today there are about 35 structures in the village, all of which are wood. Over half of Breakabeen's structures were built in "Greek Revival" style and demonstrate the charm of the vernacular architecture in this period.

Several notable buildings are temple-like with a one or two story high portico supported by square columns. The two general stores, one of which now functions as an insurance office and the other as a store, both follow the temple form. The one story high insurance office has a strongly-molded pediment supported by two massive square columns. Four pilasters across the front wall are interspersed with long windows. The general store has a similar pediment but it is two stories high and has a second story porch tucked into the pattern. Several dwellings follow the size and plan of the insurance office. The beautifully proportioned church with its bold pediment, four grooved pilasters, deeply recessed doors and three-tiered square-columned bell tower is a very fine example of the ecclesiastical architecture of the period. Partly, the force of its design is achieved by the bold massing of planes and deep relief and partly by the delicacy of the plasters, secondary moldings, and scroll patterns over the doors.

The most interesting structure of the Post Civil War period is the hotel, a large, square, two story building which seems to be a variation on the Italian Villa theme. It has a flat roof, heavy boxed projecting cornice, brackets and a two story piazza across the entire facade. Delicate balusters and a row of upper spindles make this porch an interesting contrast to the large, unornamented building The porch on this hotel appears to be a successor to those columned facades of the hotels of the Greek Revival period. (The American Hotel in Sharon Springs is one example.)

Almost every structure in Breakabeen was built before 1870. The one exception is the school (1919) which now serves as a residence. The tin shop, stage coach inn, tavern and print shop are now used as dwellings. No modern intrusions detract from the integrity of this pleasant little village.

A representative collection of the Folk architecture of the Greek Revival period may be seen in present day Breakabeen. Although the village had a history of early settlement by Palatine Germans and some growth in the post-civil war period, it is the many Greek Revival structures which give the village its special character.

"To the American architect of a century or so ago Greek precedent was no mere absolute to which he must conform, but a new breath of fresh inspiration which he breathed and made his own; the freedom with which he changed and invented, the variations he developed, were the marks of his success in this task. He was working not with the exotic but with the natural, and the buildings themselves show, I believe, how natural, how American, how our own these forms became."

Far from being tradition-bound, the style was freely and imaginatively interpreted by local carpenters in rural areas many miles from the cities. It sprang into being as a result of the conjunction of many factors, among them the pride of achievement in the new country, the return of travellers who had seen Greek structures, admiration for Greek ideals and the improvement of communication routes which made possible the widespread dissemination of culture.

In the village of Breakabeen we find many of the architectural features associated with "folk" versions of the style throughout the country: the use of wood instead of stone or brick, pediments or entire temple fronts facing the street, square pillars, small windows piercing broad friezes and doorways with sidelights and transom framed by pilasters and a projecting cornice.

What gives Breakabeen its particular appeal is the uniform scale and style of the structures as well as their relationship to one another and to the stream which tumbles through the village. A finely-detailed Greek Revival church, a Greek Revival general store and a Victorian hotel, all still being used for their original purposes, contribute to the 19th century atmosphere.

A map of 1760 shows a cluster of fourteen structures in the vicinity of present day Breakabeen. The initial settlement probably occurred between 1738 and 1745 as a result of the southwards expansion of Palatine Germans living between Middleburgh and Schoharie. No doubt the site was favored because the Keyser's Kill offered potential mill sites. A map of 1779 shows a sawmill and a grist mill at this location.

After the chaos of the Revolution, the German stock was joined by some of the New Englanders sweeping westwards along the Mohawk Valley route seeking new lands to replace those they had exhausted at home. Since the fertile bottomlands were already in the hands of the Germans, the newcomers had to be content with hillsides.

There was little immigration from abroad until well after the War of 1812. The real influx of immigrants began with the building of the Erie Canal. It reached the proportions of a flood in the two decades preceding the Civil War.

As a saw and grist milling center for the rich surrounding farmland, Breakabeen received its share of this growth, which resulted in the construction of more than half the village between the years 1830 and 1860. The Church and two stores were also built during this period.

After the Civil War, Schoharie County, unlike others which lost population, continued to increase. This much slower growth is reflected in its late 19th century structures such as the hotel.

During the period 1820 to 1890, New York State farming had changed from a mere subsistence level to the production of food to be marketed in distant places. Competition from the west and diseases had caused the decline of New York State wheat and hops; dairying had risen in importance. That the Schoharie Valley farmers weathered these changes well may be seen in the constant growth of Breakabeen throughout the period. A list of business places in the village in 1888 shows twenty-eight establishments, including an oyster house, stores, blacksmiths, foundries, tannery, wagon makers, milliners, carpenters, shoemakers, tinsmith, mason and coopers. And of course, the saw and grist mill were still going strong.

But now all growth stopped and a decline set in. Like many other villages in the state, Breakabeen's business community was unable to compete with mass-produced goods transported by railroad, with the pull towards the cities and with the westward movement of populations.

One general store, one hotel, one church and one office in a village of little white houses still remain of the formerly busy village. Not yet marred by modern intrusions as are its neighbors to the north, Middleburgh and Schoharie, Breakabeen still provides a visible record of mid 19th century life and tastes in the Schoharie Valley.

Hedrick, Ulysses Prentis. A History of Agriculture in the State of New York. Hill and Wang, New York, 1966.