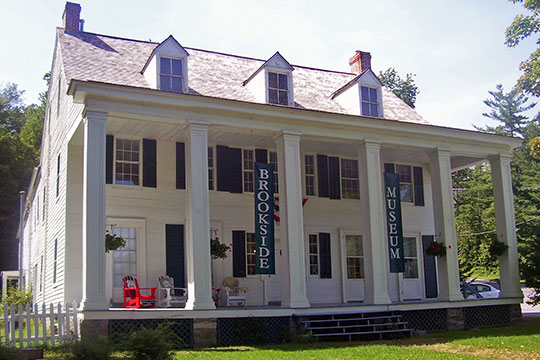 Brookside was listed on the National Register of Historic Places in 1975. Portions of the content on this web page were adapted from a copy of the original nomination document. [1]

Brookside (also known as Aldridge House; 6 Charlton Street) is located in Balston Spa on the flats at the base of Mohican Hill. The heavy growth of woods behind it and the rambling creek in front of the structure emphasize the rural setting.

It is obvious at first glance that the Brookside building was constructed in stages, resulting in a structure five bays wide by nine bays long. The front block consists of a five by three bay, two and a half story structure with roof ridge paralleling the street. Later partitioning on the interior conceals the fact that this block probably had the central hall, one room deep type of plan commonly found in Georgian influenced structures.

A later porch with full height square pillars runs across Brookside's facade. At the rear, are a long two and a half story extension half the width of the front block, and an adjacent small two story shed roofed section.

History records that this rear extension was preceded by a kitchen. Another addition, a ballroom on the north side of the house, was moved across the street to become a residence.

The foundation of the front block is fieldstone. The block is sheathed with both beaded and plain clapboards. The steeply pitched gable roof is covered with asphalt shingles. There are three dormer windows. Sash are double hung; the number of lights varies. Inside end chimneys and a heavy panelled entrance door with sidelights contribute to the portrait of a rural federal period structure derived from Georgian architecture.

The framing of this front section is hand hewn. The ceilings are low. Numerous changes to the interior of Brookside have left a residue of early and mid-19th century woodwork. The stairway is embellished by simple brackets applied to the string. The railing has slender balusters, turned newels and appears to date from c.1860.

There is little or no original hardware. A full cellar extends under this part of the house and also under the small rear addition. Evidence indicates that the Greek Revival design porch replaced an earlier similar porch.

Brookside was constructed in the wilderness to serve the needs of visitors to the first mineral spring to be used by the white man. Brookside continued to play a role in the history of Ballston Spa throughout subsequent uses as private school, military academy, home and apartment house. Presently owned by the Saratoga County Historical Society, whose goal is its preservation, Brookside is one of those buildings whose successive alterations have created a harmonious whole and a record of changing times in the community.

In prehistoric times, this spot at the foot of Mohican Hill is said to have been the gathering place for Indians who came to benefit from the waters of the mineral spring. This spring, now defunct, was located on the east side of the creek a stone's throw from Brookside.

Sir William Johnson visited the wilderness spring in 1767 when the nearest settlers were located at Ballston Lake. A few years later, a team engaged in surveying the Kayaderosseras Patent did likewise. Other famous visitors were George Washington (1783) and Elkanah Watson (1790). As these visitors publicized the existence of the spring with its carbonated waters and curative powers, groups and individuals began to come to the site, camping in the clearing which had been made by the Indians of an earlier day. The campground was at that time the only open space in the dense forest and in addition the nearest dry spot in the almost impossible swamps that surrounded the spring.

At the end of the Revolutionary War, Benajah Douglas, a resident of Stephentown and grandfather of the noted statesman Stephen A. Douglas, purchased the tract of one hundred acres of land on the west side of the creek, opposite the spring. It was his intention to capitalize on the steadily increasing flow of tourists visiting the spring.

In 1797, Douglas built a crude two room log house on the property to serve as home and hostel. Together with a separate housekeeping cottage, this served until 1791. At that time a competing guest house was constructed by Micajah Benedict about a mile away.

In 1793 recognizing the threat to his business, Douglas moved to recapture his competitive position by building a new structure with a columned piazza — the front block of the present Brookside. Later, the early piazza was replaced by one of Greek Revival design. During the summer of 1793, Douglas had such a prosperous season that others were encouraged to build hotels and the new settlement prospered.

Joseph Wescot was the next owner of Brookside (1795-98), to be succeeded by Josiah Aldridge (1798-1836). Aldridge constructed a rear wing and a north wing (a ballroom later moved and converted into a residence) as well as a pavilion at the top of Mohican Hills.

More than anyone else, Aldridge realized that if the village were to reach its full potential as a summer resort, the area around the still primitive spring would have to be improved. During his tenure as village trustee this task was accomplished.

Meanwhile, new hotels were being built and new wells drilled to service them. Probably as a result of these activities the old spring failed in 1835. Eventually in 1847, a new spring was drilled. Called the Old Iron Spring, it is located just north of Brookside.

During the early and mid-19th century, resorts were also being developed in other areas which had mineral springs. Saratoga Springs to the north of Ballston Spa was a close competitor whose attractions, extended to recreational facilities and racing, gradually eclipsed those of Ballston Spa. The economic base of the latter community shifted to industrial with the advent of large mills.

In 1846, Brookside's long career as a hotel ended when the building became the Ballston Spa Institute, a school for boys. From 1859 until 1864 it served as a military academy. After the Civil War it became a private home and after that an apartment house. It is presently the headquarters of the Saratoga County Historical Society.