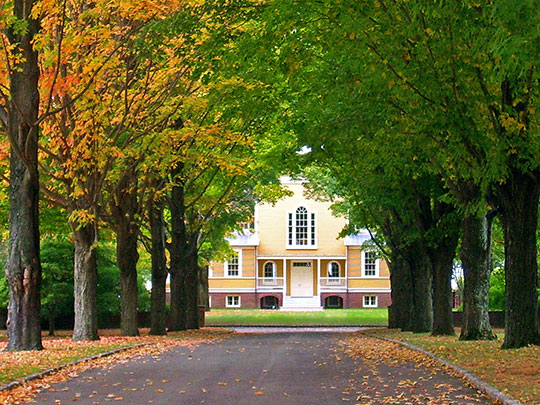 Boscobel was listed on the National Register of Historic Places in 1977. Portions of the content on this web page were adapted from a copy of the original nomination document. [‡]

Boscobel is dramatically situated on a rural site at the top of a bluff overlooking the Hudson River just north of Garrison. The main facade faces southwest towards the Hudson over an expanse of lawn and gardens, with the Highlands in the distance providing scenic variety to its emphatic setting.

The five-bay, two story, frame residence displays, in its facade treatment and interiors, highly refined, neo-classical style decorative detailing. The central section of three bays has a low pitched gable roof while the flanking masses each have sloping roofs that rise from the cornice to abut the central section just below its cornice. Two small, single story additions on the rear elevation, the summer kitchen and estate office, have lean-to roofs against the rear wall. A narrow porch connects the two lean-to additions in the rear. Uncovered porches extend from both the east and west sides of the residence and are supported by stone piers. An excavated area under the west porch serves as an entrance pavilion to the "English" basement with its service rooms and kitchen. Four chimneys, two on the east and two on the west side of the structure, service nine fireplaces.

The front (south side) of the house incorporates a giant, recessed portico with a second story balcony, forming a pedimented central pavilion. Four delicately tapered colonettes, parallel to the front plane of the structure, support the balcony and, on the second story, the pavilion's pedimented overhang. A central doorway with side and fanlights is flanked by large six-over-nine double hung sash. The wings on each side have single bay fenestration also with large sash flanked by smaller sidelights. Each of the side bays is slightly recessed into a large rectangle that emphasizes the four giant pilasters on the front elevation.

The rear entrance on the first story is a modern addition called for by fire regulations. The rear staircase to the basement was also installed in 1958 to meet fire code regulations. The basement area was altered to fit the house for its role as an historic house museum. A dirt-floored store room was altered for use as ladies' and gentlemen's toilets. A furnace was installed in what had been two small, servant's bedrooms across the front of the house (under the dining room, entrance hall and front parlor) and a large museum room was created from space originally occupied by one of the kitchens, a large dirt-floored store room, a smaller store room, and the servant's living room. The other kitchen remained as before while a servant's bedroom under the rear lean-to was converted to a small, modern service kitchen. The rest of the structure was reconstructed as it had been found, using the Historic American Buildings measured drawings which had been drawn in 1934.

Boscobel is perhaps the most extraordinarily refined surviving example of an Adamesque style residence in America. Built between the years 1804 and 1807 for States Morris Dyckman (1755-1806) on a site in Montrose, fifteen miles south of its present location at Garrison-on-Hudson, its design follows English prototypes of a slightly earlier period and well documents a continuing interest in English taste well after the American Revolution.

States Morris Dyckman was born in New York City to a family of German and Dutch ancestry. During the period of heated political activity in New York City before the Revolution, States became a partisan for the loyalist cause and, when the British occupied Manhattan in 1776, found a position with the British army as a clerk in the Quartermaster Department. Sir William Erskine was head of this department at the time and States Dyckman came into close personal contact with him. As a result, Dyckman accompanied Erskine to England in 1779 and remained there, with the exception of one year, until 1788. During that time in England, Dyckman met many cosmopolitan and wealthy Englishmen and was exposed to the then popular upper class taste for Adamesque neo-classicism. Before his return to the Untied States, Dyckman purchased many household furnishings and decorative objects in England and had them shipped to his family in America.[1]

In October of 1794, Dyckman married Elizabeth Corne. Only six years later, financial difficulties forced him to return to England to recover monies owed him from earlier associations. It was not until early in 1804 that Dyckman was able to return to America with his finances bolstered. That Spring he began to plan and construct Boscobel.

Many of the important bills and contracts for the residence have survived. Most of the work appears to have been under the direction of William Vermilye, a master builder and a cousin of Dyckman as well. On March 27, 1804, Dyckman made an agreement with Joseph Wheeler, a Quaker neighbor near Kings Ferry for "Three hundred good Sound White or pitch Pine Saw Logs, Two-thirds of which are to measure sixteen inches at the smallest end." In April of that year Dyckman paid his brother Benjamin for seventy-six planks. In July he bought 20,000 shingles from Solomon Levy. In March of 1805 he purchased iron and steel bars, files and nails from Leonard Kip of New York. There are other surviving bills for building stone and accounts by the day with masons and carpenters. The colonettes on the portico were turned by N. McDougall of New York, while the marble and fine cut stone came from Douglas and Frothingham. These unusually complete records form a significant collection of information not only about the source of materials for the structure but about building practices in the first decade of the nineteenth century.[2]

Dyckman never saw his country house completed as he died in 1806. But work continued and was completed for his widow and son, Corne, later that year. Virtually unaltered, the house remained in the family until 1920. From that time until 1955 it was constantly under threat of demolition. In 1955 the Friends of Boscobel organized and purchased the house just before it was to be demolished and arranged to move it fifteen miles north to another site quite similar to the original. The reconstruction of the residence on its new site relied upon the Historic American Building Survey (1934) drawings for guidance. Although code regulations called for some minor alterations, the restoration and reconstruction has been as faithful to the original as possible. All the important architectural elements have been retained and an effort was made to conceal any modern alteration behind the structural fabric of the original structure.

The architectural merit of Boscobel lies in its successful manifestation of the neo-classical elements of design. Its large central hallway (22 x 42 ft.) was designed for elegant entertainment and is divided longitudinally by an open arcade at the base of the "M" shaped staircase. All the finely detailed mantels are original (except those in the basement) as is the elaborate wood and plaster neo-classical decoration throughout the house. Overall, the quality of design and execution demonstrated at Boscobel typifies the urbane and cosmopolitan flavor of the best examples of residential architecture of the Federal period, and also epitomizes the expression of the English taste in American decorative arts during that same period.

Boscobel is today operated as an historic house museum by Boscobel Restoration Inc. and benefits the public with professional utilization of its educational potential as one of America's more important period architectural documents.