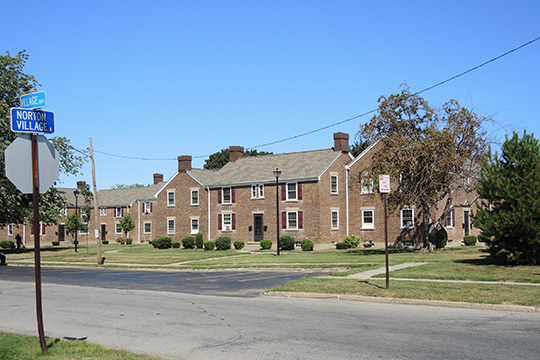 The Norton Village Historic District was listed on the National Register of Historic Places in 2010. Portions of the content on this web page were adapted from a copy of the original nomination document. [‡]

Norton Village Historic District is located at 2145 Norton Street on a roughly rectangular 18-acre plot in the northeast quadrant of the city of Rochester. It is bordered on the north by Norton Street Park, on the east by Bleacker Road, on the south by the Norton Village Recreation Center and Waring Plaza and on the west by residential houses. The surrounding urban area is comprised principally of residential streets on the north, east and west sides, and by an open recreation area and shopping center on the south side. The Norton Village Historic District includes 144 two-story garden apartment buildings, each with two, two-story units, totally 288 units all completed in 1949. There are no garage units, only parking areas. There are two play areas located in areas surrounded by apartment buildings. Non-contributing buildings include the recreation center, built in 2008, a maintenance shop (ca.2000), and the headquarters building of Rochester Management, Inc. (circa 1980), all located at the east end of the property. The property is flat and is landscaped with mature trees.

Sidewalks are laid out in a combination of linear and curvilinear plans, depending upon the shape of the apartment groupings and access the apartment entrances located in the center of both sides of each apartment building. Green space surrounds the entire complex and in small courtyard areas defined by the sidewalk patterns. The play areas are located in the center of the two large clusters of nine-building groupings that are at the northern half of the complex.

The two-story, two-unit apartment buildings are rectangular with gable asphalt roofs. The front facade consists of three bays, including a center entrance. The rear facade consists of mirrored arrangement of an entrance and small vestibule near the center, with an outside bay of windows, and a small window symmetrically arranged on the second floor. All buildings are clad in brick with cast-stone door surrounds, lintels and sills. The eaves are lined with vinyl trim. The basements are parged.

Windows on both facades are double-hung windows with divided lights. On the front facade, the entrance is flanked on one side of the first floor by a 10-over-1 sash and the other side by 6-over-1 sash. The second floor windows have 6-over-1 windows on the outside bays and pair of 4-over-1 windows above the entrance. On the rear elevation, the larger double-hung windows are 6-over-1 sash, the smaller are 4-over-1 sash. All of the windows are replacements for the original windows but, generally, fit the original window openings. Basement windows are rectangular with glass blocks or rectangular panels which contain vents.

The interior floor plan is identical in all units with two, two-story units per building. After entering through the front outside door there is a small vestibule with a private entrance to each apartment. Each enters into the living room (151.8 sq. ft.) with a 77.4 sq.ft. alcove that leads to a square kitchen (65.4 sq.ft.). The rear door to the apartment opens off the middle of the kitchen. Above the living room is the front bedroom (141.9 sq.ft.) with closet. On the rear side is a smaller bedroom (77.4 sq.ft.) with closet and full bath. All of the door openings have plain trim.

Norton Village Historic District is significant as an intact post-World War II veterans' garden apartment complex, which was representative of the leading model promoted by the Federal Housing Administration before, during and after the war. The development is associated with the Rochester Plan, a post-war housing solution developed by Rochester merchants and the City of Rochester, to provide quality, low-rent housing for veterans and their family. Built in 1949, the complex of garden apartments illustrates the principles of the Garden City Movement of the early 20th century, where small two-story apartment buildings were arranged in small clusters in landscaped settings, providing private entrances for individual apartments, pedestrian walkways that were separate from vehicular roads, and green space for recreational activities.

Norton Village was the third of three projects built under the Rochester Plan, an innovative post-World War II veterans' rental housing project, in which a private, non-profit corporation, was formed by stockholders representing some fifty firms covering every phase of Rochester's industrial, commercial, mercantile and financial entities, as well as the city itself. The corporation built and held title to a garden-type apartment complex of 144 two-story apartment buildings, providing 288 four-room units on land provided by the City of Rochester. The cost of construction was financed by an F.H.A. insured mortgage. The Rochester Plan was an example of the city of Rochester's continuing tradition of private and public enterprise and cooperation in creating the financial resources to improve the quality of life in the community. While other communities throughout the country resorted to public housing for veterans in the wake of World War II, the citizens of Rochester insisting on providing quality, low-rent housing for veterans and their families, using the resources of local companies and cooperating with the City of Rochester, which provided the land, a low tax assessment and street improvements.

Norton Village was built in the northeast quadrant of the city, where it was convenient to bus lines, schools, churches, and a few shops. Soon after the construction of Norton, a recreation center was created on five acres directly south of and contiguous to Norton Village, which provided enlarged play areas for residents of both Norton Village and Fernwood Park complexes, as well as newly-built single-family houses. A shopping center, Waring Plaza, was constructed in 1949-50 to serve the families of the growing residential neighborhood.

Norton Village Historic District is architecturally notable as an example of a garden apartment complex, which consisted of three or more two- or three-story buildings clustered around a landscaped courtyard with a central entrance, but no common hall or lobby.[1] These complexes closely followed the Garden City Movement principles, which included a separation of pedestrian and vehicular traffic and the use of shallow building plans with staggered setbacks to increase ventilation and light.[2] The garden apartment complex is also a representation of the leading model promoted by the Federal Housing Administration during the 1930s through the 1950s.

Norton Village complex of 144 two-story, two-unit garden apartments is built on an 18-acre rectangular plot with the buildings occupying approximately 30% of the land, and the remaining 70% set aside for landscaped lawns, pedestrian walks, parking lots and play areas. The main entrance to the complex, Village Way, bisects the complex on the north-south axis and connects to the east-west Norton Village Lane. The apartment buildings are grouped in four main clusters, with both sides of the buildings overlooking green space within and around each cluster. The clusters contain groups of three to five apartment buildings set in U-shaped or L-shaped groupings, in which the end apartment buildings are offset enough to allow for windows at the ends of buildings, providing as much light as possible in each unit. A few groupings consist of three apartment buildings built on a straight axis, with the center building staggered slightly, breaking up the massing of the whole. Because each building has only two apartment units, each two stories, there is a front and rear side to each building with a single front entrance to a small vestibule, which leads to each apartment. And, unlike the other two complexes, each apartment has a separate rear entrance onto a small wood porch on the rear side of the building. All of the buildings are solidly built of brick and cast-stone and appear as single family dwellings with only three bays. The buildings are distinguished from one another by their distinctive cast-stone front entrance surround.

The landscape architect is unknown but is similar to that of Fernwood Park, with foundation plantings as well as trees located around the perimeter of the complex and interspersed within several of the enclosed courtyard and play areas. While the original foundation plantings have been eliminated or replaced, the original trees throughout the complex have matured and remain signature elements of the garden apartment design. The two main children's play areas are located in the centers of the two large clusters that front on Norton Village, giving sense of safety, enclosure and privacy. The pedestrian sidewalks are curvilinear, following the rambling shape of the clustered groupings.

The interior plan of Norton Village is unique because of its two-story plan; the other two veterans' projects (Fernwood Park and Ramona Park) have interior plans showing a single identical unit on each floor. All of Norton Village units are identical and follow the garden apartment ideals — to provide light, fresh air and a view of green space. The square plan of each unit provides a living room, dining alcove, and kitchen on the first floor, and two bedrooms and a full bath, as well as closets on the second floor. Because apartments take up the full width of the apartment buildings, windows are located in all of the rooms, with larger windows generally found in the living rooms. Some of the apartments have side windows, where the apartment buildings are at the end of a line, U-shaped or L-shaped group. The apartments have no architectural features, as all window and door trim, if any, is very simple. The private heating unit is located in the basement of each unit. The original brochure about the first veterans' project, Fernwood Park, described the individual heating source as a "unique heating arrangement." The brochure further describes attributes of the system in that "no outlet is farther than six feet from the furnace, and cold air returns assure good supplementary circulation in combination with the blower."[3]

Norton Village Historic District is an important example of a post-World War II garden apartment complex design, promoted by the Federal Housing Administration, and, as a product of the Rochester Plan veterans' housing solution, a symbol of the Rochester tradition of private enterprise and innovation.