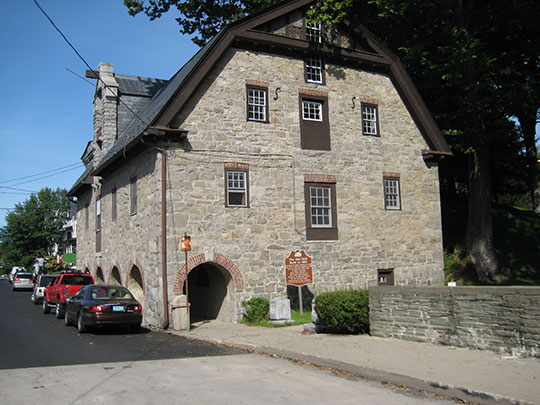 The Blairstown Historic District was listed on the National Register of Historic Places in 2007. Portions of the content on this web page were adapted from a copy of the original nomination document. [‡] .

The Blairstown Historic District occupies the historic core of the village of Blairstown, which is in eastern Blairstown Township, in northern Warren County, New Jersey, approximately six miles north of Hope, New Jersey. It is situated along the Paulins Kill and State Highway 94 approximately ten miles northeast of that highway's junction Interstate Route 80. The village of Blairstown occupies the flood plain of the Paulins Kill, at the foot of the limestone uplands within the Ridge and Valley section of the state. Blair Creek, a small tributary of the Paulins Kill, cuts through the ridge just north of the village and flows into Blair Lake and from there south through the village, providing waterpower that was utilized from an early date. An early mill site is located along Main Street, an early east-west road that roughly parallels the Paulins Kill and the now-abandoned Warren or New York, Susquehanna and Western Railroad, just south of the river, which gives the village its east-west axis. The village encompasses several rectilinearly platted blocks extending from Route 94 north into the first upland. It is primarily residential but includes a number of commercial and institutional uses. With the exception of some open space belonging to Blair Academy, the village is completely developed. The Blairstown Historic District also abuts the Register-listed Blairstown Presbyterial Academy Historic District.

For the most part, the Blairstown Historic District's buildings are predominantly frame, gable-roofed vernacular structures of moderate size that date from the village's development as a railroad junction in the last decades of the 19th century and exhibit stylistic influences typical of that era, primarily Italianate, Bungalow, and Colonial Revival. Streetscapes throughout the village exhibit tightly spaced dwellings on small lots. Overall, the existing material losses on a minority of the buildings do not obscure the aspects of integrity that convey the significance of the district, specifically location, design, setting, workmanship, feeling, and association.

The village of Blairstown is the place most closely and deeply associated with the 19th century railroad baron John Insley Blair (1802-1899) for whom both the town and the Blair Academy have been named. While there was a small village in existence before 1819, known in the 18th century as Smith's Mill, changed to Butt's Bridge in 1793, and then to Gravel Hill in 1825, the fortunes of the village changed substantially with Blair's arrival in 1819 at the age of seventeen. Blair had his own general store when he was eighteen, and acquired five more stores and four mills by the time he was twenty-seven. His local prominence was recognized by the renaming of the village in his honor in 1839. Blairstown's moderate late 19th century building boom followed the establishment of the Blairstown Railroad in 1876 by Blair, who by means of business interests and philanthropy was directly responsible for much of the community's subsequent commercial, industrial and institutional development. Blair became involved in mining, railroading, banking and politics on a national scale, eventually becoming president of sixteen railroads and one of the world's largest owners of railroad lands, all the while remaining a committed resident of Blairstown. The Blairstown Historic District has first and foremost a significance for association with John Insley Blair. It also possesses local architectural significance as an assemblage of mostly late 19th and early 20th century buildings whose form, detailing, and spatial organization are representative of the region's vernacular architecture in that era, revealing the influence of then-popular building forms and styles, which were frequently combined to create distinctively eclectic buildings. Two prominent buildings, the mill (12 Main Street) and the water works (14 Main Street) are associated with Blair, who owned the mill during the second half of the 19th century and built the water works in 1889. Blairstown's commercial significance stems from its small, but well-preserved business district along Main Street, which forms a physical documentation of the emergence of the "central business district" in the region's late 19th century villages and towns, in contrast to the earlier pattern of spatial integration of residential, commercial, industrial functions. Particularly noteworthy are the stores that retain their two-story porches, which were once a common feature of the region's late 19th and early 20th century main streets.

Over the years, the fortunes of Blairstown evolved according to various advancements in transportation as well as the vision of the village's most noteworthy citizen, John I. Blair. Initial settlement developed around a favorable mill site along a small tributary of the Paulins Kill during the second half of the 18th century, and was enhanced around 1793 with construction of a bridge across the river, which gave the settlement one of its early names, Butt's Bridge. With a large mill, tavern, storehouse, blacksmith, post office and river crossing, the settlement was an important local service center by 1820. The village continued to grow slowly and by 1844 it could also boast two churches and a hotel along its main street. The founding by John I. Blair and others of the Blair Presbyterial Academy in 1848 served to accelerate the growth of the community, with several additional shops and two lumberyards added by 1860. By 1872, several small manufacturers had established businesses in the village. In 1876 John I. Blair incorporated the Blairstown Railroad, which began service in 1877 and led to the dramatic growth of Blair Academy, facilitated visitation to nearby lake resorts, and generated a moderate building boom in the town over the next 25 years. Main Street gained a number of commercial buildings, an enlarged hotel, a public hall, and the Blairstown Press building during this period, further concentrating its importance as a local and regional service center. Residential building took place within the historic district, primarily along Carhart Street, Douglass Street, High Street and East Avenue. This period of growth within the village slowed dramatically with the construction in 1908-1911 of the Delaware, Lackawanna and Western Railroad cutoff 1.3 miles away, leaving the village railroad station to be serviced by what quickly became a secondary line. The village was effectively bypassed again when State Highway Route 80 was constructed south of Main Street around 1930. As businesses migrated to new sites along the highway, Main Street lost importance as a regional commercial center, though it continues to function as a local service center for the residents of the densely built village.

At least partly as a result of being bypassed by 20th century transportation improvements Blairstown has been able to preserve much of its late 19th and early 20th century character, including its well-defined business center and its spatially well-organized residential streetscapes. Almost half of the primary buildings within the Blairstown Historic District were built between 1880 and 1900, the boom period following the construction of the Blairstown Railroad. Roughly two-thirds of the buildings were built between 1870 and 1910. Only a handful of buildings are earlier than c.1870 or later than the mid-1930's. The distinctive historical character of the village results from the survival of these buildings, and their siting, with regular spacing on narrow lots and shallow setbacks. These contributing buildings and their attendant outbuildings, totaling a remarkable 162 out of 183 altogether, are in general well preserved with relatively few inappropriate modern alterations. Collectively they possess architectural significance. Their form, construction, detailing, and siting provide a representative illustration of the rural region's essentially vernacular architecture in the late 19th-early 20th century period.