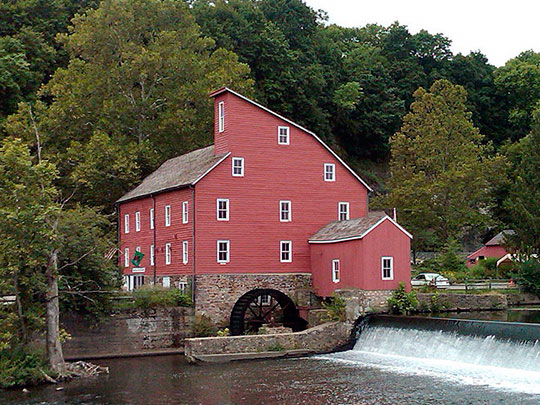 Named for New York Governor DeWitt Clinton, the Town of Clinton was established in 1829 and incorporated in 1865. At the time of incorporation the various parts of the town were included under Clinton, Franklin and Union Townships. Clinton gained autonomy in 1895.

Clinton, population 932, has an old mill (Dunhams Mill) on the banks of the South Branch of the Raritan River, a popular fishing stream. This is one of the few New Jersey grist mills still using water power. Its dim, heavy-raftered interior is cloudy with the dust of more than 100 years and its heavy stones turn as steadily today as ever. Rebuilt in 1836 from an older structure, it predates most of the Civil War architecture of the town. The Clinton House, a two-story, rambling frame house with a square-columned porch, built about 200 years ago, was long a stopping place for the Easton stagecoaches. Even in the morning, cars with licenses of a dozen states stand before it, having brought patrons to the beamed Colonial dining room.