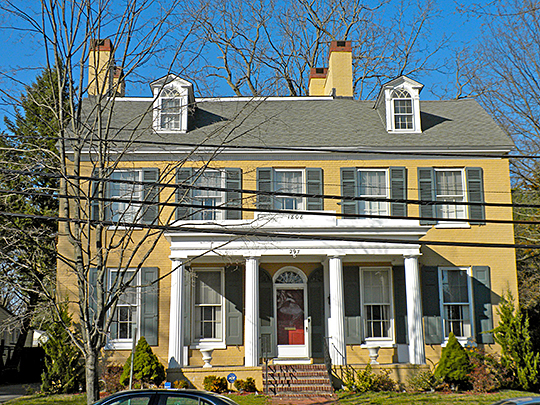 The Bridgeton Historic District was listed on the National Register of Historic Places in 1982. Portions of the content on this web page were adapted from a copy of the original nomination document. [‡] .

Bridgeton is significant because its industrial, architectural, and social heritage is unique. It is a nineteenth century town whose extraordinary diversity of industry and commerce gave it rare economic stability, and whose benevolent paternalism gave it an equally rare social stability. It has a great variety of architectural designs unified by one form, the vernacular A-Front Double House.

The history of Bridgeton covers a span of almost three hundred years and its heritage is significant in a number of areas, all of which are represented in the Bridgeton Historic District. The architecture includes examples from the eighteenth century to the twentieth, with a predominance of nineteenth century buildings, both modest and extravagant, by local builders and well-known architects, which comprise a textbook of that century's styles. Particularly notable is the local vernacular A-Front Double, which forms the basis for a variety of treatments throughout the nineteenth century.

The survey on which the Bridgeton Historic District is based did not include archeological investigation. Some work has already been done by John Milner on the Cumberland Nail and Iron Works site. Other areas probably also have potential, although most of the industrial and commercial sites have undergone so many changes that retrieving clear data may be difficult. The Ferracute Machine Company is a vacated site and has remained relatively undisturbed since it was rebuilt after a fire in 1903. Other possible areas are Mill Town, Indian Fields, and the banks of the Cohansey River. The areas deemed to have most potential are included in the Bridgeton Historic District.

Bridgeton was, in the nineteenth century, the commercial center of West Jersey. It was the trading point for the abundant agricultural produce of the area. Its numerous canning and glass factories sent their wares throughout the nation via river, road, and rail. Its most impressive industry, the Ferracute Machine Company and its founder, the inventor Oberlin Smith, were famous throughout the world, and made significant contributions to manufacturing technology.

The first known settler, Richard Hancock, set up a sawmill sometime in the 1680's, and Bridgeton grew steadily, although modestly, throughout the 18th century as two separate towns, one on each side of the river. The early settlers of the area were migrants from New England in search of a milder physical and spiritual climate. They brought with them a style of architecture — braced frame clapboard box-like buildings — and a strong belief in education and Christian principles. Industrious, thrifty, and conservative, they laid the groundwork for stable commercial and social institutions and early set the cornerstones of churches and schools. They also established the town as the seat of Cumberland County and as an official U.S. Port of Entry. In addition, these early settlers spawned lawyers and doctors who represented the area in state and national government (Drs. Jonathan and Ebenezer Elmer) and distinguished themselves in the Revolutionary War (The Drs. Elmer and Cols. Potter, Buck and Seeley) . The Society of St. Tammany was founded by Dr. Ebenezer Elmer in 1787 at his house on Vine Street.

Another major early influence on Bridgeton came from Quaker Philadelphia in the form of a more urban tradition. By the 1750's several brick row houses were built in a markedly Philadelphia style on the south side of Broad Street, and the Bridgeton town plan and street names showed more than a casual understanding of that growing Pennsylvania metropolis. By the early 1840's, however, the street names were changed in a rejection of Philadelphia traditions, and the brick row house was to become the rare exception, not the rule.

Although there are some vestiges remaining in Bridgeton of the 17th and 18th centuries, their numbers are small in comparison to buildings and institutions dating from the 19th century. The third bank south of Trenton, chartered in 1816, the Cumberland Bank, is still, along with both its buildings, in existence. The East Lake Woolen Mills, established in 1811, survives today [1982] after several transmogrifications, and the Stratton Buck Company glass works in 1836 was only the first of a large number of such enterprises which flourished throughout the 19th century. Likewise, the Cumberland Nail and Iron Works was a major force in the town from its founding in 1816 until it went out of business in 1899.

The first half of the 19th century also saw the burgeoning of fraternal organizations, professional interest groups, churches, schools, the oldest YMCA in the state, and a fire insurance company.

The post Civil War period up to the turn of the century was clearly a boom time in Bridgeton. Twenty new glass factories were founded in as many years, the canning business proliferated, and already existing companies of various kinds expanded. By 1880 Bridgeton was the largest city in the state south of Camden, producing glass, textiles, leather, lumber, canned fruits, machinery, and almost anything metal from nails to pipes. Shipments regularly went all over the eastern seaboard by rail and water. The Ferracute Machine Company sent its wares from East Lake as far as South America and China, and its founder and president, Oberlin Smith was nationally recognized as an engineer and inventor, a friend of Ford, Edison, and Firestone.

Between 1885 and 1890 five new canning factories were established along with two new textile companies, eight glass works, and a paper mill. Some 1,100 houses were supplied with water, the Bridgeton Electric Light Company illuminated the city, and the Delaware and Atlantic Telephone Company had seventy-five subscribers. In 1889, 460 ships were enrolled in Bridgeton and three railway lines sent seven trains daily to Philadelphia. The city boasted two banks, three hotels, five public schools, four academies, and numerous churches. By 1895 it had a population of 13,000.

Bridgeton continued to be successful and stable into the 1930's, but like many northeast industrial cities it has since suffered a decline. Industrial consolidation, outside ownership, and labor problems have radically diminished its industrial strength. Changes in transportation modes and the advent of the suburban mall have weakened it commercially. Unemployment, poverty, and deterioration now are all too visible in this once proud city.

In the 19th century Bridgeton was called "The Gem-O-Jersey" because it sparkled with built achievements in an atmosphere of exuberant optimism. The A-Front Double House of the skilled worker stands as the proud architectural emblem of the town's golden age of stability, when its industries were booming. This stability was due to several factors: diversity of economy which made the town less vulnerable than other cities to periodic financial crashes; a highly skilled, well-paid labor force often working in heterogeneous teams which were not inclined to mass disaffection; and a paternalistic society in which the ruling merchants and factory owners allowed — even encouraged — a worker to have his own plot of ground and house. In addition, a multitude of churches and protective social and professional societies provided the means for social interaction and support.

The importance of mutual dependence and support systems in Bridgeton is manifested physically in the double house, the town's predominant dwelling form. Often these buildings were built and shared by brothers or by co-workers in the factories. Some were built as investments, with the owner living in one half and renting out the other. Size of family and financial circumstances do not seem to have made a difference in the building of doubles except in scale and extent of architectural detail. A glass factory owner was just as likely to share a party wall as were the workers in the factory. The double house can be seen as a symbol for a city whose success was derived from the willingness of the rich to invest in the town and from the acceptance of mutual dependence and support among individuals.

Bridgeton still retains a large number and variety of buildings in good condition dating from the 17th, 18th, 19th and 20th centuries. Vernacular A-Front Doubles with spare embellishments sit side-by-side with fully-blown Queen Anne buildings. The 1880's mansard roof was a favorite improvement to an otherwise unpretentious building. Italianate commercial buildings, Bracketed Villas, Gothic churches, and industrial complexes in a variety of forms round out this collection of structures by skilled local builders as well as famous imported architects.

Despite the variety of periods, styles, and uses of buildings contained in the Bridgeton Historic District, the ensemble presents a cohesive whole with common characteristics discernible along a three hundred year time line. Basic building forms and lot sizes, the presence of greenery and ornate porches throughout the district are unifying forces which transcend differences in taste and financial resources. The Bridgeton Historic District as a whole is a unique view of a 19th century culture.