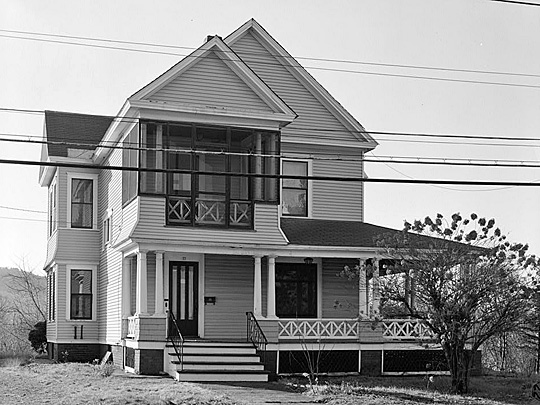 On October 26, 1764, a township six miles square, containing 24,000 acres, and named Claremont, was granted to Josiah Willard, Samuel Ashley, and 68 others. The name of the town was derived from the county seat of Lord Clive, a celebrated English General who was styled as the founder of the British Empire in India.

The Claremont region is characterized by rugged terrain, and some of the highest and most scenic mountain ranges on the eastern seaboard. But because of its industrial background, the inherent qualities of Claremont's setting and historic mill structures were often overlooked. It's decidedly urban character, on a small scale, set in a rural context, makes it a unique town.

The Emma Houde House (photo — also known as the Arpin House) was used as a private home (which also accepted boarders) initially, and was later acquired by the Moose Club, which used it as a fraternal hall. In the 1920s, the Beadreau brothers purchased the property as their home. In 1936 the Arpin family acquired the property and created a second story apartment. The structure was part of a solidly French Canadian immigrant neighborhood developed about 1900 at the intersection of Washington and Winter streets, stimulated by the expansion of Claremont's textile and machine tool industry.