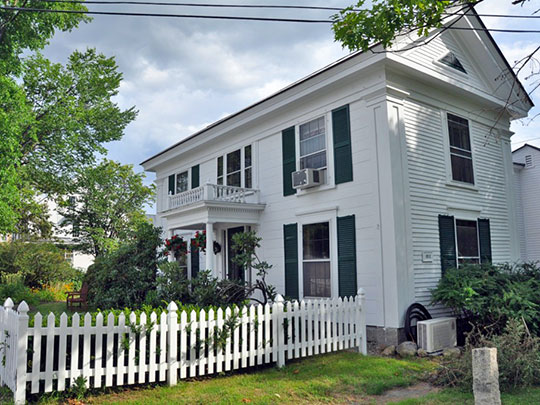 The Dr. Solomon M. Whipple House was listed on the National Register of Historic Places in 1985. Portions of the content on this web page were adapted from a copy of the original nomination document. [‡]

The Dr. Solomon M. Whipple House is an excellent example of a Greek Revival style home. Built in 1850, the two-story wood frame structure is the only example of Greek Revival in the area, based on a house by house survey. Prominently located in the center of town adjacent to the New London Town Common, it is a striking statement as one looks across the well-manicured lawns of the Common to the triangular pediment, Doric pilasters, and broad entablature. The later additions reflect the characteristic New Hampshire practice of combining the house, its additions, and the barn into one long composition, as protection against savage winter gales and heavy snows.

The three bay Main Street elevation is bold in silhouette, broad in proportion and has simplified detailing. Bilateral symmetry is evident throughout, and—as was typical—the house has been painted white. The low roof pitch mimics the temple rooflines of ancient Greece. The eave line faces Main Street and the temple facades, with their heavy pediment gable which is trimmed with moldings along its base and sloping sides, face the town common and the side street, Whipple Court, very visible as one travels up and down Main Street. The heavy entablature and cornice continue to form a pedimented gable. The substitution of the Greek anta form for columns was used. These square Doric order pilasters were applied to the corners of the structure. The omission of fluting from the Doric Style was typical particularly in country work. Also, the Whipple House is characteristic of the American form of the Greek Style in that triglyphs and mutules on the entablature have been omitted. The wall surface of the front facade was kept as smooth as possible with flush wide wood boards horizontally applied with no overlap. The six-over-six windows have the typical large lights with slim muntins. The door opening is flanked by side lights. All windows and the door are trabeated, with the first floor windows having heavily molded heads. The structure shows evidence of the influence of the noted Boston architect, Asher Benjamin; it has a certain masculine sense, forthright character, and largeness of scale. There is something almost stark about the building. Hallmarks of Benjamin's designs have been incorporated, such as the use of a flatter cornice with a greater projection than was used in the classic style, eight times diameter pilasters, and the use of flat bands and fillets.

The plan and interiors also reflect the simple bilateral symmetry of the classical influence. The original basic house plan is geometrically regular and rectangular. The interior window and door trim emulates the Greek Style. Simplified Greek triangular pediments were used over all openings. Oversized casings simulating pilasters with Doric Style fluting were used in the public rooms.

The house was built in 1850 by Dr. Solomon M. Whipple, who was the town physician and community leader. Dr. Whipple, the town doctor longer than any other physician, was also President of the New Hampshire Medical Society in 1876. Dr. Whipple had his office in the house. His children contributed greatly to the area including the building of the town hall, the Whipple Memorial Hall, the founding of Kearsarge Telephone Company (still the phone company today); and the founding of one of the area's first stage lines. After the Whipple heirs, the house passed on in 1941 to Dr. William P. Clough, Jr. where it remained until recent times. Dr. Clough was also one of New London's most prominent citizens and town leader as well as being it's eminent physician for thirty-five years; he also had his office practice in this house. Dr."Bill", as he is still remembered, was chairman of the New London Planning Board, President of the New London Outing Club and Fellow of the American College of Surgeons. The building has a long tradition of housing generations of New London's most beloved doctors and their practices.