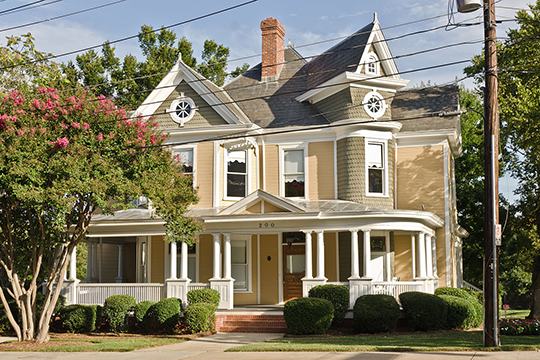 In 1765, Henry Eustace McCulloh donated a tract of 360 acres to John Frohock, Abraham Alexander and Thomas Polk, as commissioners, to hold in trust for the County of Mecklenburg, on which to erect a courthouse, prison and stocks. McCulloh was the agent of Augustus Selwyn who owned several immense tracts of land on a grant from the king, making it obligatory upon him to settle them with an average of 1 person to every 200 acres. McCulloh realized that the interests of his employer would be well-served by locating the county seat on his land.

Charlotte was officially established as the county seat in 1774. From 1685 until that time there was much contention among various interests competing locations. In 1774 Charlotte covered less than 100 acres of land, but population increased steadily. In 1778 a law was enacted permitting the laying off of 80 additional lots as all of the original ones had been taken.

The history of both Charlotte and Mecklenburg County during the last quarter of the 19th century is chiefly an account of the growth of the manufacturing industries. As these grew, agriculture and the trades were developed to supply the increased demands, and as the city grew, public buildings were erected and improvements made for the benefit of the public.

A water works plant was established in 1882, and purchased by the City in 1899. Gas lights had been put into operation as early as 1857. Street cars were running by 1887 with electric power substituted for horse power in 1893. In 1883 the Southern Bell Telephone Company began erecting poles. An ordinance prohibiting the sale of tobacco on Sunday was enacted in 1877. A sewage system was established in 1881, and a crematory for waste disposal was established in 1896.