Photo: Sears Magnolia Model Kit House, Benson, NC. This was the largest and most-expensive of the Sears Roebuck and Company kit houses. It was from their Honor Bilt catalog; No. 2089, a 10 room colonial priced at $6,488. The home today (2014) is part of a funeral home complex. While the home is not separately listed, it is located within the boundaries of the Benson Historic District. Photographed by User:Unknown, 2010, uploaded 2013 by User: Kithousefans, [cc0-by-1.0 (creativecommons.org/publicdomain/zero/1.0/deed.en], via Wikimedia Commons, accessed April, 2014. 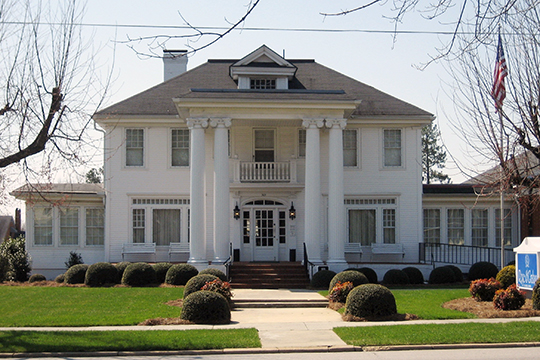 The town of Benson, which derives its name from early settler Alfred Monroe ("Mim") Benson, owes much of its historical development to the advent of a railroad line from Contentnea to Fayetteville which passed through the present location of the town in 1886. A. M. Benson, originally from Black Creek, had purchased a 402-acre tract along the Smithfield-Fayetteville Road from J. Green Rainer in 1874, initiating settlement of the area which is now Benson. During the 1880s, Benson sold portions of his original tract to incoming settlers, many of whom were farmers attracted to the rich agricultural lands of the region. When the railroad project was begun in 1885, ownership of some of this land was surrendered to railway officials requesting right-of-way permission.

Construction of the 70-mile railroad line, known as the Fayetteville cutoff, was part of a plan by the Wilmington and Weldon Railroad to shorten the traveling distance between North and South Carolina. In addition to accomplishing this goal, the railroad provided the impetus for the growth of the small commercial center of Benson in a heretofore rural section of North Carolina. Benson was incorporated in 1887, and soon attracted a number of individuals who were to shape its physical appearance and economic climate as they took advantage of the entrepreneurial opportunities presented by a new town along an important transportation route.