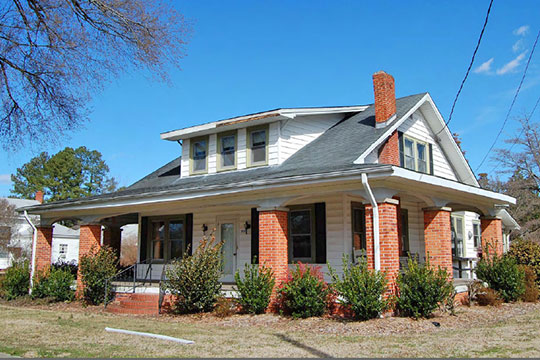 The Town of Halifax consists of two parts: the original 1757 town of 100 acres that extends from the Roanoke River west to Prussia Street, and the 1816 town extension created by the development of the town commons adjacent to Prussia Street. During the 1800s, the governmental and commercial buildings gradually shifted away from the river to the higher ground of the western blocks of the original town and the 1816 extension because the river often flooded. When the Wilmington & Weldon Railroad came through the west outskirts of town in the late 1830s, on its way to the nearby town of Weldon, development of the western extension accelerated. The Halifax Historic District consists of the two western quadrants of the original town, from St. David Street to Prussia Street, as well as the 1816 extension area.

The original town began in the mid-1700s at the upper navigable reach of the Roanoke River, just below the fall line. In 1757, when the new county of Halifax was created out of Edgecombe County, James Leslie sold 100 acres of land to the new county commissioners to create the county seat. Four acres in the center were reserved for government buildings, and streets and lots were laid out in a gridded block plan of three northeast-southwest streets oriented perpendicular to the river, intersected by seven cross streets. Each square created by the streets was laid out in six large lots. The streets were named for British leaders and patron saints. In 1758 the town trustees held a public sale; forty-nine buyers purchased nearly all of the lots. An undated plat map has survived that shows the numbered lots and the names of the original purchasers.

In the late 1750s the town grew quickly from a small group of houses near the river to a community with over sixty families. In 1760 Halifax incorporated into a borough town allowed to send a representative to the House of Commons. A courthouse, several taverns, and many houses were erected. Surveyor C. J. Sauthier surveyed and drew the community in 1769, noting the locations of the courthouse, jail, a tobacco store, a hemp store, a play house (apparently a theatre), and over sixty houses.

The town's most storied history occurred during the final quarter of the eighteenth century, when its position as the trading and governmental center for the Roanoke River Valley attracted educated, civic-minded citizens, including such men as Willie Jones, Henry and Joseph Montfort, Richard H. Long, John Baptista Ashe, and William Richardson Davie, who played leading roles in the American struggle for independence from Britain and in the establishment of a constitution for the new state of North Carolina, as well as a state university. Although its population probably never surpassed 1,000 people, its geographic location on the bustling Roanoke River in the heart of the Albemarle region, North Carolina's first cultural hearth, with close ties with Virginia, made Halifax a significant place.